Article 6 is the key.

Without a defined and agreed upon outcome for Article 6, the whole point of COP 26 (and all 25 conferences before this one) was a waste of time.

The Conference of Parties (COP) will need to stop the talk and deliver action.

Which Way Will Carbon Credits Go?

That’s what Article 6 is all about.

Within the framework for global emission reduction in the Paris Climate agreement is a specific principle that is snarling up the ratification process.

Known as Article 6, it pertains to carbon credit ownership. Specifically, who gets to apply for the carbon credit against their emission level.

Let’s suppose Microsoft wants to offset its carbon footprint for a server farm in the United States.

It goes out and buys 1 million carbon credits which were produced from a carbon offset project in Brazil. Since Microsoft bought the credits, it should get to reduce its emissions, right?

But the offset is located in Brazil. So should Brazil get to reduce its emissions as well?

What about the United States which has now seen its emissions drop due to the purchase of the offsets from Brazil?

Choose Your Adventure: The Fork in the Road

There are 2 schools of thought on how to approach this dilemma, and essentially what Article 6 needs to finalize.

I believe Verra is correct when it states that forbidding host countries from counting the credits in their territory and used by private companies as emission offsets would slow down the deployment of carbon projects.

A host country would forbid any project generator other than a domestic state-owned offset generator to design and build offsets.

All the credits generated would have to be sold domestically (meaning lower prices based on supply and demand) and go to nationally determined contributions. It would essentially prohibit any international investment into offset projects.

The primary buyers for carbon credits, globally, have been international companies with global carbon footprints.

Under the Gold Standard model (Option 2)

Corporations from outside the host country would “donate” to the offset generator but would not reap the emissions offset benefit. It’s hard to see how that framework works in a global finance setting like we live in today.

Forget the fact that government works much slower than the private sector and leaving it up to the governments would likely mean we’d fall even further behind our emission reduction goals.

If the Carbon market goes to Option 1…

Which suggests that both the buyer of the credit and the producer of the credit can both count the emission reduction, I don’t see a major change in how the market will unfold and we are positioned well.

If there is a black swan event and Option 2 is selected it makes things more challenging. Credits issued under Verra would likely have to be sold in the country where the credits are certified which would result in lower prices for carbon credits and more importantly, lower demand for carbon-reducing projects.

A 3rd option is that a revised international carbon market governed by the UN or IMF is put into place.

Under this framework, it would allow the transfer of currently verified credits from a recognized organization such as Verra or Gold Standard, and these credits could be onboarded onto a UN or IMF international trading framework.

This would allow the politicians to feel like they have control while still allowing the private market the opportunity for price discovery and market development.

This would build upon the Clean Development Mechanism which was the precursor to the Paris Agreement.

The Future of Carbon Credits

It is incredibly rare to be on the emerging frontier of market development.

Mainly because most markets have already been around for decades.

There are many highs and lows to come.

As the internet made information more readily available, that arbitrage opportunity disappeared.

For example, when the collapse of the Soviet Union happened, there was incredible potential for foreign companies to buy state-owned enterprises.

The ones with access to information were able to make the right valuations and made fortunes.

Most in the west avoided the Russian and FSU state auctions because of the corruption, but when the wall in East Germany came down, the compliance and governance of West Germany were applied to all state-owned enterprises.

Very little corruption happened as a result and East Germany was properly brought into the modern world of finance and the region thrived.

And I have my money invested right where my mouth is.

Even with so much technology and information readily available, so few people are aware of the opportunity present.

Sometimes it is helpful to think about things at a 30,000-foot view, rather than under a microscope.

If you speak with almost any commodity producer on the planet, they’ll tell you it is very common to pre-sell current production using futures contracts. And it is equally as common for them to lock in hedges for things like currency exposures or electricity prices.

Today, over 90% of the carbon market is settled in the spot market. This means very few carbon offset developers or carbon credit buyers are using the futures market for exactly what it is designed for.

Furthermore, as you’ll see in the chart below, the vast majority of trading is conducted outside of an electronic trading platform. 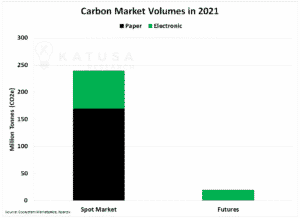 This year, only 30% of those spot market voluntary carbon market contracts were settled on an electronic exchange. Most carbon transactions today are brokered, and relationship-driven rather than companies logging into a platform to transact like stocks.

Price discovery is non-existent. This will change.

The carbon market will evolve to a place where

Last year, I started talking about the cost of carbon emissions to a projects Net Asset Value.

That means one must assess and be able to evaluate the cost of pollution to one’s project over the life of the project.

Yet, we still haven’t seen a single analyst report showing the impacts of such write-downs to specific company valuations.

And in true Katusa style…

We will be publishing the carbon write-downs on many of the most followed and well known resource companies in the world.

Whether you like my style or not is irrelevant. This math is what is coming to all the balance sheets in the coming years, and you can position your portfolio ahead of the pack.

Luck is being prepared when opportunity knocks.

I’m knocking, pay attention and position your portfolio to benefit from the coming carbon write downs.