HomeResearchMacroWhat Have You Done Today to be Better than Rick Rule?
1900 seen 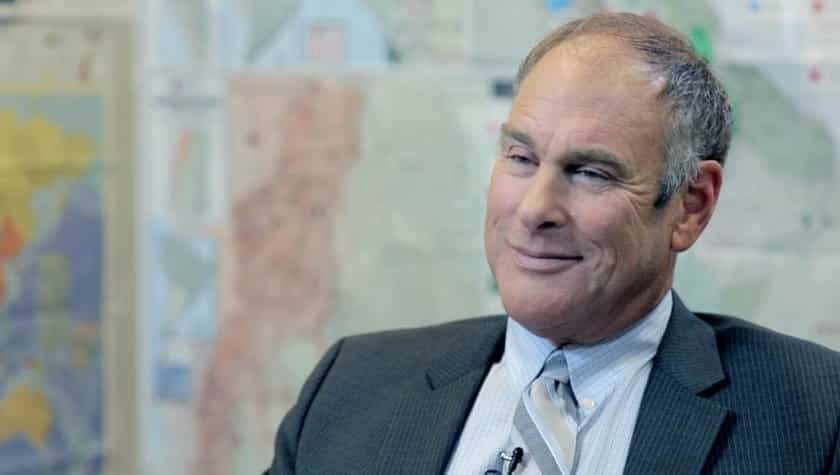 Who is the best public speaker in mining?

Most would say it’s Robert Friedland. But it’s not.

Without a doubt, that title belongs to Rick Rule.

Rick is quick witted and very fun. But it’s not until you get to know him on a personal level that you realize how smart he really is.

I first met Rick at the end of the January 2003 Cambridge House conference.

He literally spent hours with me after the show, in the hallway of the conference venue after everyone went home. Back then, I was full of drive and ambition and had found something I loved, mining.

Rick gave me his personal business card. I had zero business knowledge at the time, but I knew this guy was someone I wanted to work with.

I kept his card on my office wall until I called him 2 years later. I’d just came back from Serbia and had an idea on how we could pick up some past producing assets in Serbia and Kosovo.

That was the beginning of my business mentorship, partnership and then friendship with Rick Rule. But it was far from an easy ride. I’ve lived and survived the Rick Rule School of Business.

Today Rick and I are good friends. At times we’re partners in deals, and at other times—we’re competitors for a deal when there isn’t room for the both of us.

But it wasn’t always that way.

I’ll share a story that few people know, of how Rick acknowledged me in the markets for the first time publicly.

It was 2006, and I’d started making a name for myself in the business. I was the largest investor in 2 hot companies at the time, Copper Mountain and Cuadrilla Resources. Both had completed financings and were preparing to go public. I was the largest individual investor in both deals at the time.  I was on a roll, as I capitalized on the tungsten and uranium bull markets.

I devoured any interview, print or online, with Rick Rule.

But it was an interview in late 2006 that shocked me. Rick was interviewed by a well-known talking head and at the time the largest followed business show. In short, the interview started like this:

Rick Rule: “Well, I’ll tell you where I am not. My oldest and dearest friend in the world, Doug Casey, has hired this young mathematician, who is unblemished with success and struts through town in cowboy boots and shoots all sorts of deals structuring Private Placements.”

I got a digital copy of that video—as it was a pivotal point in my career.

Rick is a golden glove boxer. Wow, did he ever sting me with an unexpected left hook with that one without even throwing a punch.

Up to that time, I thought I had Rick’s respect. Little did I know…

And that line, “unblemished with success” was the ultimate way of saying…

This smart punk ass kid made a bunch of money in a bull market and now he has his intelligence confused with a bull market.

I didn’t sleep that night. I literally thought about what he had said all night. He was right.

I was unblemished with success at the time.

I had a new goal.

So, I printed a big poster in the middle of the night—with Rick’s face on it.

It was on my wall, above my computer in my office and I would repeat that saying thousands of times over the next few years.

But it wasn’t until he called me to have lunch in early January 2009 that things changed.

At the time I had just taken over Doug Casey’s funds and they had been through a train wreck, down over 80%. Rick wanted to know what my plans were.

I laid them out.

I think Rick was intrigued to see if I could pull it off.

I told him about a computer program and model my team and I had created, and he wanted to see it.

I was so excited that Rick Rule was in my office that I was completely focused on my computer screen explaining the financial modelling we could do.

That’s when I realized Rick wasn’t paying attention to what I was saying, but was looking at the poster on my wall with his face on it and the words:

It was one of those awkward moments. Neither of us said anything.

That’s when Rick offered up that he did the exact same thing with his mentor over 25 years earlier who ripped him a new one. OK, I’m not the only weird one.

Right after this, we started talking regularly and doing a lot of Private Placements together.

Rick was spending a lot of time with me and making a conscious effort to mentor me. Oddly enough, at this time, I became his neighbor. Bonnie, his wife, wasn’t thrilled when she was in our living room and noticed we could look down right into their living room. It was a ‘stalker’ish’ way for me to know who Rick was entertaining and what possible deals were happening.  I would regularly ask Rick —“Oh I saw you had Bob Quartermain over for dinner—anything I should be involved in?” or whatever other guests he had over.

At PDAC (the major mining conference in Toronto) in 2010 during a 7 a.m. breakfast, Rick pitched me to buy the Casey Funds and have me work for him. As a fun side note, Rick and I have done this PDAC breakfast ritual every year since and whoever shows up 2nd pays.

To give you an idea of our relationship, I showed up at 6:30 a.m. for a 7 a.m. breakfast this past PDAC, and Rick was already there! Man, the guy is hard to beat. I bought breakfast. Next year I’m showing up at 6:15am for our 7am breakfast!

Now, back to Rick’s 2010 PDAC pitch. I was honored, but I knew I was an alligator that had a lot of prey to finish up on. I love Rick, but I didn’t want to be his employee—I knew I wanted to be his partner, not employee.

So, as a solution, Rick and I created the KCR Fund (Katusa Casey Rule) a month later. It was to fund and invest in the next generation of resource superstars. We each put up millions of dollars and the experience has been incredible. It’s always a positive experience when your fund can pay major dividends in a tough market.

That brings me to why I still pay attention to Rick Rule, and why I still regularly think to myself,

“What Have I Done Today to be Better than Rick Rule?”

Rick and I are guests at each other’s conferences. For me it’s always a highlight at the Vancouver Resource Investment Conference (VRIC) or San Francisco Gold & Silver Summit when Rick and I take each other on for the audience. Like I said, he isn’t scared to throw a punch. And I love it.

Rick is the mastermind behind the Sprott Conference which will be held between July 29th and August 2nd 2019 in Vancouver, BC. It’s at the Fairmont Hotel Vancouver which is on 900 West Georgia Street in the heart of downtown.

I will be there, and so will the who’s who of the mining business.

So, Rick and I had a chat recently and I asked him—what are the three panels you are most excited about?

I’ll be there for all three as well.

But I’m most interested in the Up and Comers as I plan on making a lot of money with the stars of my generation. Not to mention, I have personal relationships with many of the panelists, so it’s easier access to their deal flow. Rick mentioned that he is excited about the Up and Comers because they don’t carry the price premium of the Living Legends.

I pointed out to Rick that was the historical norm, but everyone can buy Ross Beaty’s next big gold bet at a big discount to NAV.

Over the last few years, this was the conference where Rick Rule was talking on stage about companies like Marianna Resources, Reservoir Minerals and Nevsun, and Atlantic Gold. All played out well if you wanted to listen.

Rick and I know each other well enough and have enough respect for one another that we don’t do the dog and pony show with softball questions. I wanted to know… what are the three junior stocks he is most excited about in the next three years? Rick legally couldn’t answer that (because he’s a broker and all the legal lingo that goes with unsolicited advice), so I rephrased it.

“Rick, knowing I like money: which three companies should I spend extra time truly understanding the business models of, that I can potentially be making money in over the next 12-18 months?”

Rick took Ross out for his 68th birthday recently. Ross told Rick that he’ll build Equinox into a 1 million ounce per year producer before his 71st birthday.

Then I asked, what are Rick Rule’s 3 largest dollar investments outside of his Sprott holdings?

Rick’s largest holdings are Sprott shares and Sprott products. But that’s too easy. I wanted to know names of companies with booths at the conference.

I like pushing for more info—mainly because Rick is always up to something interesting. I don’t always go with his bets, but they are always interesting.

So I asked: what are three deals that Rick Rule wants to do a Private Placement to increase his position in, but is waiting for the right terms for?

Rick and I also started chatting about beaten down sectors, and one of his favorites is uranium.

Rick said he was delighted with the result of the Section 232 investigation. He believed it was the right outcome for the country, but that Section 232 was bad for the uranium business because it was protectionist legislation (that’s the Libertarian in Rick speaking, I think).

Rick is excited because so few people can finance uranium right now and he plans on investing in a big way over the next 18 months across the board as he believes all of the companies will require fresh capital.

We joked that the sector has been so bad, perhaps the TSX will make an exemption for us with 10 year listed free-trading warrants.

And we ended with these rapid-fire questions. Basically—will each commodity be higher or lower in 12 months? Below are Rick Rule’s thoughts over the next 12 months: 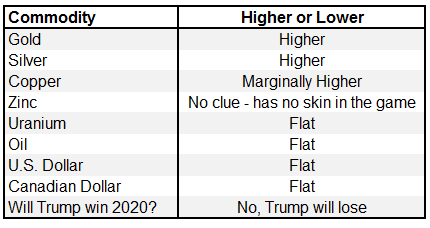 For more information on the companies I mentioned above, as well as to meet with the legends and upcoming stars of the mining industry, make sure you don’t miss the Sprott Conference in Vancouver next week.

P.S. If you’ve been on the fence and out of the room, out of the deal on my premium research service, Katusa’s Resource Opportunities then now is your chance to join. Subscribers have seen gains of 260%, 101% and 170% in 2019 and several more double-digit wins in 2019. Don’t be left behind.