HomeResearchOil2015 Silver Summit, India and the Elephant in the Room
335 seen 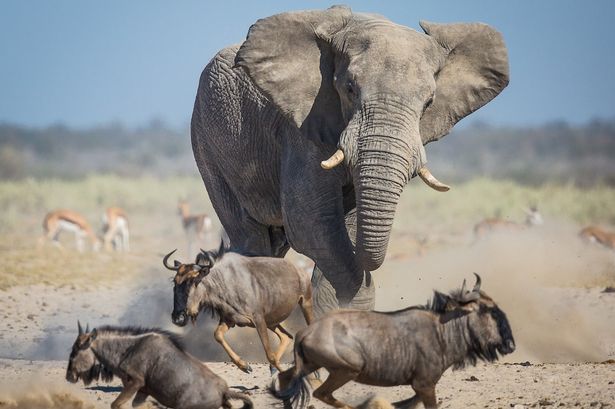 On November 23-24 there is a conference in San Francisco that I highly recommend all serious speculators attend.  Yes, it’s Thanksgiving week.  Yes, the markets suck.  Yes, we are entering tax loss season.  But, always remember, Fortune Favors the Bold, but The Wise Get Paid. Do you know any of the following: Ross Beaty, Dave Iben, Grant Williams, Amir Adnani, Ron Thiessen, Keith Neumeyer, Randy Smallwood, Rob McEwan, Frank Holmes, Rick Rule, David Lowell, or Bob Bishop? They are all worth listening to.  All experienced and successful.  I make an effort to attend their talks, whenever I can, because I learn from all of them. They are making time to come to the show because they understand the benefits of being on a platform with the smartest people in the business. This conference will be packed full of actionable information. For more on the show, go to: https://goo.gl/0QwjJX India’s Elephant in the Room Right now, China is trying to move to a consumer-driven economy, something it is struggling to accomplish.  At the same time, India is doing the same and, aided by sliding oil and other energy prices, the country is slowly seeing a positive shift in that direction. 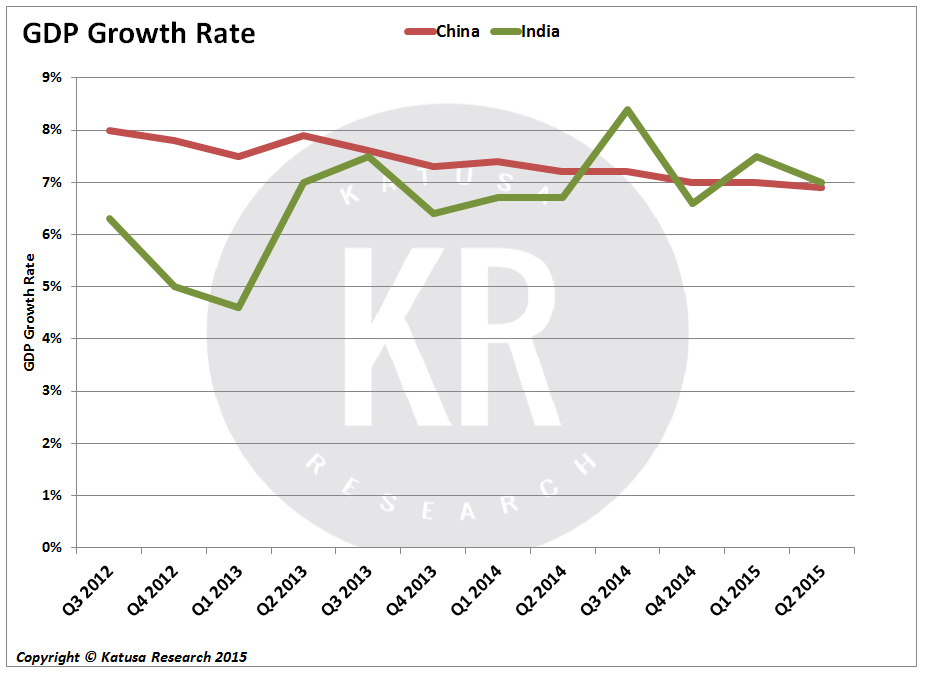 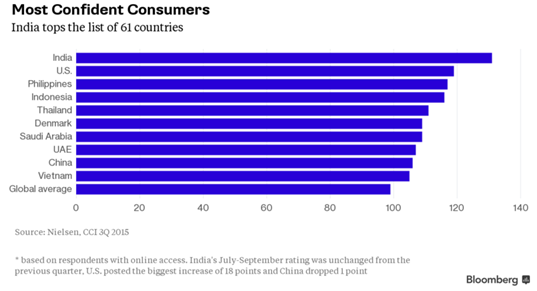 Many of India’s domestic industries are preparing for the onslaught of consumer-driven growth. Since the backbone of consumer growth is energy consumption, that is forcing India’s state owned Oil & Natural Gas Corporation (ONGC) to take steps to secure India’s energy future. From personal experience, the largest board room I have ever set foot in was ONGC’s in Delhi.  In 2010, my colleague and I had a meeting with the President and Chairman of ONGC.  The board room table was at least 75ft in length and behind the president and Chairman was a theatre styled seating of 5 rows, 30 seats wide, where the various department heads sat.  This meeting had over 50 people from ONGC and the two of us from Canada.  ONGC is about as big as it gets. Energy for the Future Over the last several years the ONGC has seen a fall in its own oil and gas production, from domestic and foreign sources, even as the economy grows at a record pace. 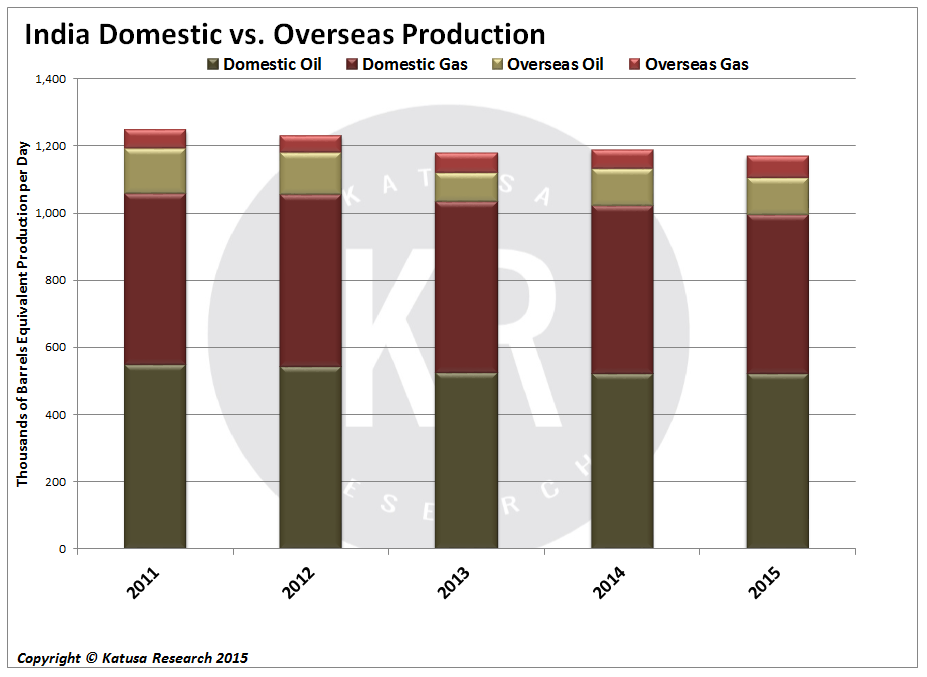 The ONGC needs to reload its energy artillery. To do that, it plans on spending $10-$12 billion on M&A over the next 3 years to double its current overseas production of 178,000 barrels per day. It has aligned with Russia, which accounts for the ONGC’s largest overseas share of oil production and reserves, through the $2.9 billion purchase of Russia’s Western Siberia assets, and the $1.35 billion investment for a 15% stake in Rosneft’s Vankor oil field. 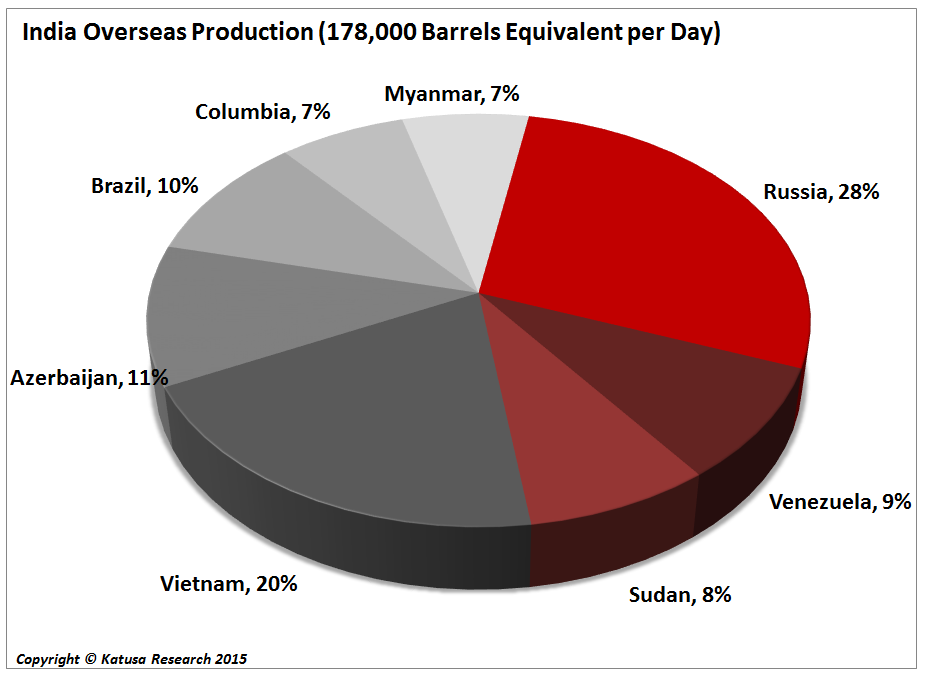 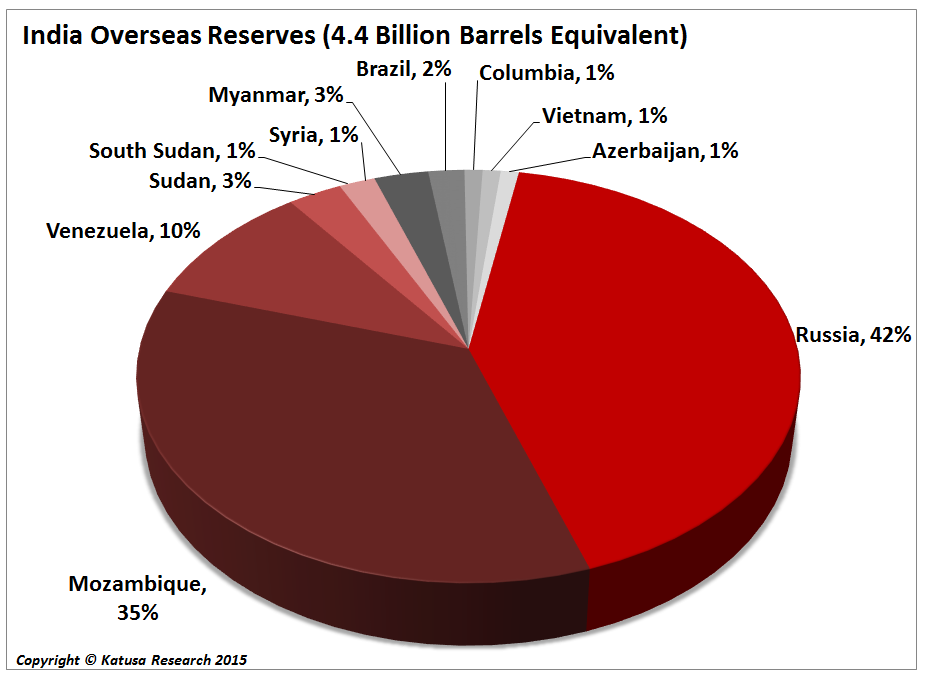 In addition to the ONGC’s overseas oil production, India mainly imports crude oil from Nigeria, Iraq, and Saudi Arabia. However, once Iranian sanctions are lifted, India will most likely replace a lot of the oil from Saudi Arabia and Iraq with Iranian oil. 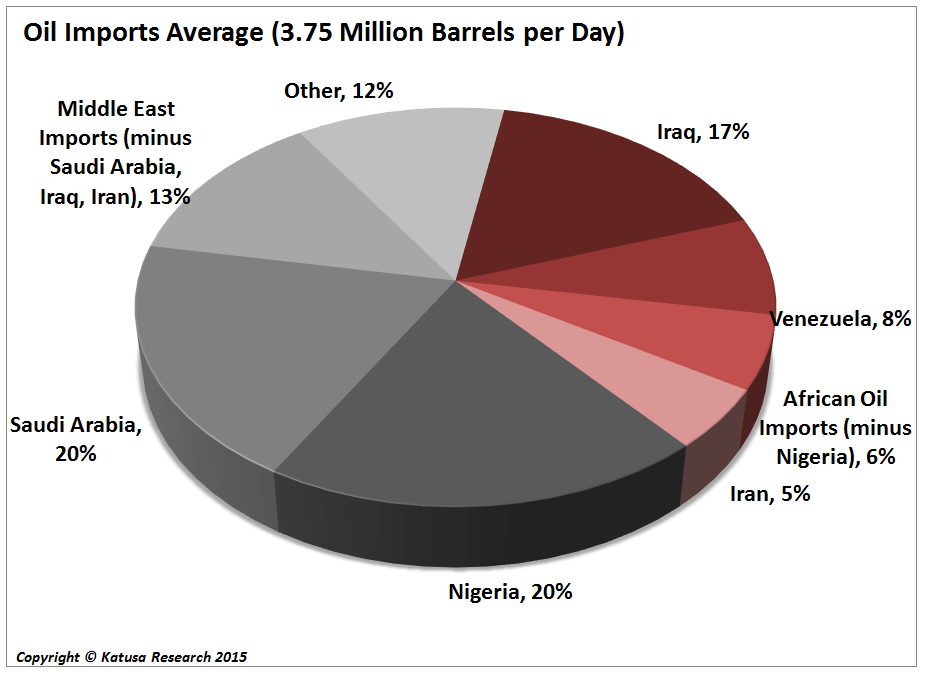 Discount Shopping & Diversification With oil prices so low and so many companies and projects falling upon difficult times, the ONGC sees an opportunity to diversify its oil production, especially along the West Africa coast and offshore Brazil. In the near term, a probable target would be Brazil’s offshore deep water assets controlled by Petrobras. For these assets, the ONGC would continue its long partnership with Shell and newly acquired BG Group to expand its position. Shell and the ONGC are partners in the Campos Basin’s BC-10 development and it is likely the ONGC will leverage that relationship to participate in BG Group’s BM-S-11 concession and its flagship Lula Field. Currently the ownership structure is 25%-65%-10% between BG Group, Petrobras, and Petrogas Brasil. With 4 billion barrels of recoverable reserves within the BM-S-11 concession, this would add significant reserve potential for the ONGC. 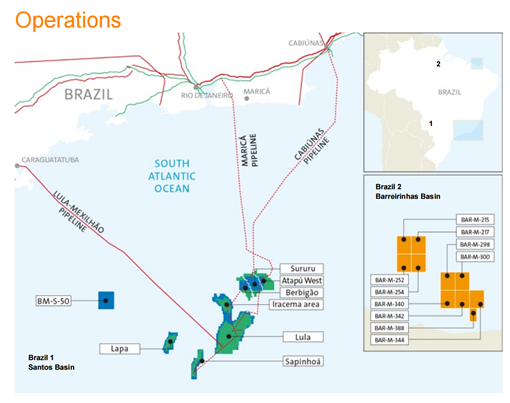 The BM-S-11 stake will likely be sold to the ONGC out of struggling Petrobras’s share. The ONGC average transaction of $1 billion could afford the company a 12%-15% stake in the project based on historical transactions in offshore Brazil. Coming to Africa 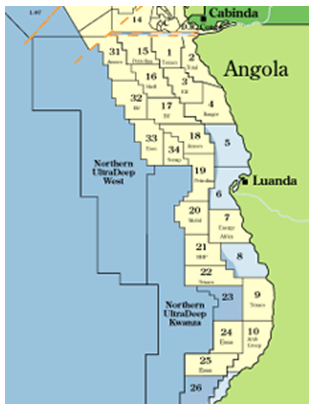 The second near term regional focus is West Africa and the coveted offshore blocks of Angola and Ghana. In 2011 the ONGC made a bid for Exxon’s (XOM) 25% stake in Block 31 offshore Angola, but that was rejected.

The next target would likely be Block 15, operated by Exxon, which holds a 40% stake in the project. The other owners of the project are British Petroleum (BP), Eni SpA (E), and Statoil ASA (STO) with 26.67%, 20%, 13.33% respectively. The ONGC may have to increase its average $1 billion transaction in order to secure a share similar to that of Statoil. This would net 35,000-50,000 barrels per day of production to the ONGC at full capacity, and give the ONGC access to a potential 850 million barrels of recoverable resources. Finally, Ghana and the ONGC have a long history dating back to 2009 when India’s ONGC and China’s CNOOC were looking to purchase Kosmos Energy’s (KOS) 30% stake in the Jubilee Field. 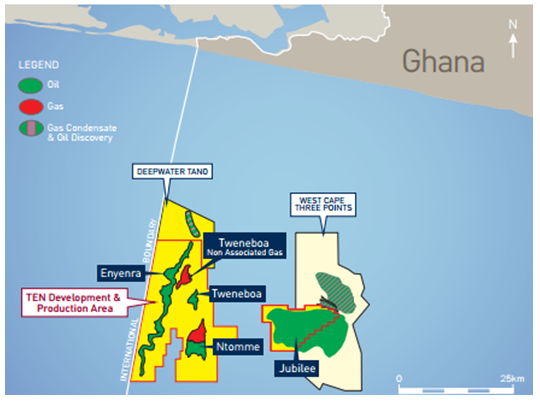 The operator of the Jubilee Field, Tullow Oil (TLW.L), was also targeted by the ONGC for stakes in its offshore Ghana projects. The $3-$5 billion asking price for Kosmos’ stake in the Jubilee field from 2009 may be too much for the ONGC currently; however, with Tullow getting ready to produce from the nearby TEN development, the ONGC may be prepared to make a $1-$1.5 billion bid for Kosmos’ 17% stake in TEN or a share of Tullow’s 48% operating share. This would net the ONGC 14,000 barrels per day in 2017 and give the company access to 300 million barrels of reserves. Katusa’s Take In today’s environment, the major national oil companies can be expected to target projects with large resource potential and substantial reserve lives, in order to maximize investment value and secure energy options long term. In my latest report, KR III: Alama Kubwa: The Big Score, I highlighted this thesis, and just this week it was borne out as a major company farmed into Africa Oil’s blocks. Even in an awful oil market we have found a way to make money. Africa Oil (AOI) is sitting on top of a monster deposit with huge potential; consequently, on November 9th, 2015 it was announced that Maersk Oil, the shipping giant’s oil segment, bought a 50% interest in AOI’s 3 Kenyan blocks and 2 Ethiopia blocks for CAD $487 million. Maersk Oil will provide an additional commitment of CAD $640 million in expenditures for its working interest upon the company’s final investment decision. AOI’s stock price jumped a tidy 35% on the news. Katusa’s Charts of Interest. Here are charts you will not find anywhere else on the net all packaged nicely in one place.  Enjoy them and more importantly, pay attention to them, I do. 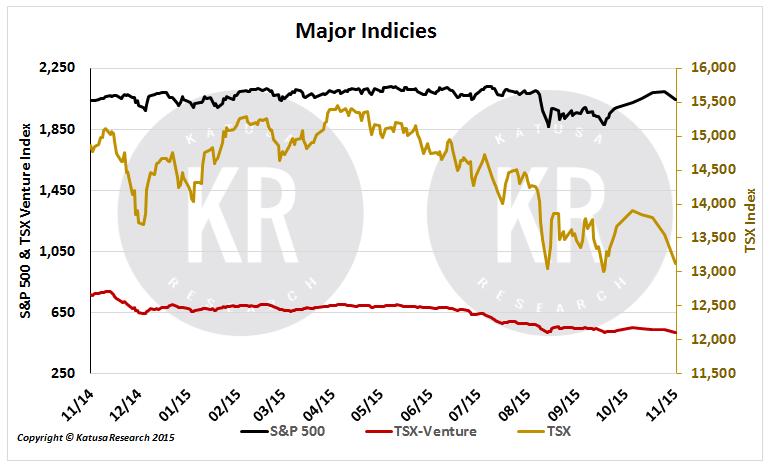 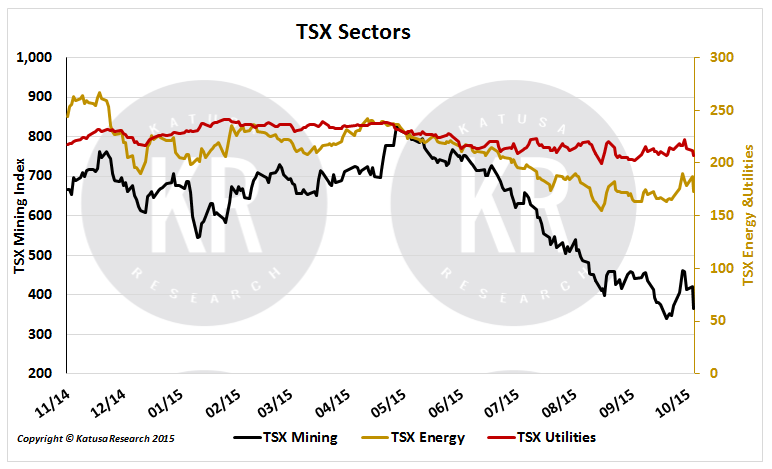