What does US$5 Billion buy you today in the offshore oil world?  Apparently, not that much.

This past week Royal Dutch Shell (RDS-A) shocked the environmentalist world by obtaining the permits to drill 6 exploration wells in the Chukchi Sea off the coast of Alaska. This is big news.  These are large, deep and expensive wells, and the Chukchi Sea is a very tough place to drill.

For those who have forgotten, the last time Shell wanted to develop some big deep oil wells in the Chukchi Sea, it managed to run the drillship into one of the Alaskan coastal islands and incur several serious pollution violations.

To say the least, it seemed that no oil company would be allowed back into the Chukchi Sea for some time to come.  But, the US Interior Department had other ideas, and it endorsed Shell’s plan. So now Shell is headed back to the Arctic, armed with 2 drill ships, to drill 6 wells.

Alaska is the Holy Grail for US oil production.  The state has produced over 17 billion barrels of oil since the Swanson River discovery in 1957.

To put this into perspective, the Prudhoe Bay oil field in Alaska is by far the largest oil field in North America. At over 25 billion barrels of oil originally in place, it’s twice the size of the next largest in Texas.  It ranks among the top 20 oil fields in the world.

Prudhoe Bay was discovered in 1959 and Alaskan North Slope production exploded. ARCO (now Tesoro) and Standard Oil (now Exxon) drilled the first production well in Prudhoe Bay in 1968. The field has more recently been operated by BP, and it topped out at about 2 million barrels of oil per day.

But Alaskan oil production couldn’t compete with shale successes like the Bakken in North Dakota and Texas’s Eagle Ford play.  That, combined with difficult permitting hurdles, has resulted in a lack of funding to further explore and develop the state’s oil fields.  As a result, Alaskan oil production has fallen off a cliff, down about 80% from its late-1980s peak.

The capex programs required to deliniate and produce in Alaska are in the billions and so projects are commonly joint ventured between majors.

The largest field continues to be Prudhoe Bay, responsible for over 55% of current Alaskan production. The field is a joint venture between Exxon (36.4%), ConocoPhillips (36.08%), BP (26.36%) and Chevron 1.16%. There are 17 producing fields currently in Alaska, the majority coming from the Beaufort Sea area with a small portion from Cook Inlet.

Production from the top 8 fields yields 96.5% of the monthly Alaskan output. Below is a chart that shows the net production per day in March 2015.

Somewhat surprisingly, Shell is nowhere to be found on the list. This is because it is currently still in the exploration stage of its Arctic program, especially regarding the project nicknamed “Burger,” which sits between Alaska and Russia in the Chukchi Sea.

One reason for the slow pace of progress is that permitting in the Arctic is a logistical nightmare, as the timeline to the right demonstrates. Arctic exploration and production is a far cry from the US shale game in the lower 48, where wells can slide into production in a matter of weeks instead of a decade.

In contrast, Shell’s Arctic expenses have tallied over $5 billion since exploration was initiated at Burger. And the company expects to spend in the neighbourhood of another billion—at least—over each of the next several years to try to prove up the area.

Why does Shell need this to work?

Previous to its acquisition of BG Group, Shell was fighting just to stay even on a boe/d basis. Decreasing production for a major is the biggest sin of all.

Production slipped 2.4% in Q1 2015 relative to Q1 2014. While still the world’s largest non-nationalized producer, it is the only IOC to have declining production rates over the last year. The BG group acquisition will naturally assist on this front, but true organic production will be hard to come by. Shell needs oil wells that will move the needle, and this is exactly what it is hoping for in the Arctic.

The need is acute because, coupled with its production drop, Shell has below average reserve replacement. That leads to a lower reserve life index (RLI), and increases the urgency of getting new wells online.

Complicating matters is that the capex price tag in the Arctic is enormous, which lengthens pay back periods and makes the project that much more sensitive to a change in oil and gas prices. Extraction costs at Burger are projected to be some of the highest in the world, due to the extreme conditions and limited operational windows due to weather. But Shell is not concerned about today’s price environment, not for projects of this magnitude. Instead, it is focused on what the price of oil is going to be 10-20 years from now, not the current spot price.

It has its eyes on a prize which was delineated in the early 2000s, when Shell first started exploring the Arctic. At that time, the US Geological Survey (USGS) put together a potential resource estimate for the Burger area. But what is that prize actually worth?

I am a vegan, for health reasons.  However, when I see a double cheeseburger, it does get the juices going, and I fight the temptation and stick with my vegan burger on a cheat day.

In the oil patch in Alaska, oil is the Big Mac or Double Whopper.  Natural gas, well, it is like a vegan burger—flat out, it’s just not as good.

The USGS mean estimates include 14 trillion cubic feet of gas and 724 million barrels of condensate but no oil. This is extremely outdated but none the less, the government at the time stated that Burger was both marginal on the development front and, more importantly, that it had less than a 10% chance to have a significant oil discovery. Is Shell going vegan?

The US government survey statement said nothing about feasibility based on the price of oil (oil was $25-$50 in the early 2000s), but more highlighted the lack of potential of finding a significant oil deposit.

International powerhouse consulting firm Rystad put together a potential cash flow model based on the current resources of the Chukchi Sea project. It becomes painfully evident that unless Shell finds significant oil pay, the project could be a huge loser. The cash flow model indicates they could drop upwards of $23 billion if they don’t find oil to supplement the gas and NGLs. 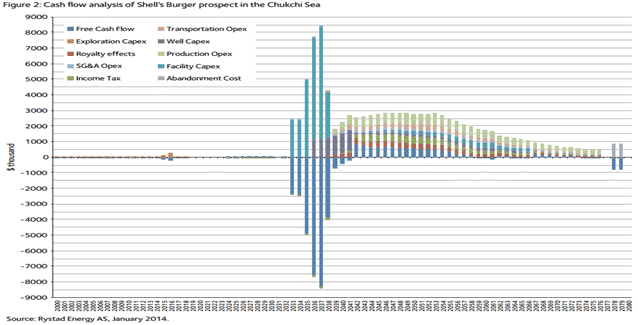 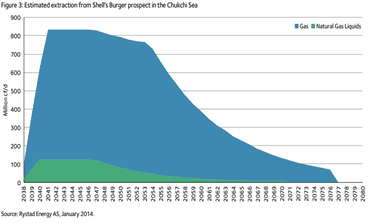 And there is at least one further point to consider when looking at the Rystad projections. The $5 billion (soon to be $6 billion) spent on exploration has not been included in the cash flow model. The undiscounted cash flow is therefore overestimating the true total cash flow for the project. Thus the project’s cash flow is actually more negative than their model suggests. Ouch.  I told you vegan burgers suck.  Trust me, I know.

So, does Shell know something the USGS doesn’t?

Nobody develops these assets to produce and sell oil at $60/bbl. So it’s clear Shell believes in the long-term price of oil, and is rolling the dice to get it.

The risk is high, and Shell knows it. The company’s Chief Financial Officer, Simon Henry, stated bluntly that Cukchi is a binary outcome: “there is either big oil, or there isn’t”. If the elephant hunting does not pay off for Shell, they will have sunk well over $5 billion into an uneconomic, extremely remote gas play.