The Iran Sanctions are a done deal.

After the Obama administration’s breakthrough nuclear deal, Iran is preparing to re-enter the oil market with a vengeance.

Ideally, it would like to see oil production cuts by OPEC, to drive up prices. But there is no way the country will sacrifice its own boost in output after being virtually shut out from growth over the past four years.

With the sanctions imposed in 2011 due to its ramp up of nuclear activity, Iran was slammed to its core as a boycott of its oil exports was adopted around the world. Countries like South Africa and regions like Europe cut all imports of Iranian oil.

Others such as India, South Korea, and Japan significantly reduced imports. Even in China, a prime growth market in oil, imports remained flat over the period.

Asking Iran not to grow production after a four-year stall would be like shooting a laser pointer into the eye of a person who was just given the gift of sight – it’s simply not fair.

As Iran brings 500,000 additional barrels per day (bbls/d) of production on line, the large markets of Europe, China, India, and Japan are likely going to get an influx of Persian oil.

Iran will benefit greatly from increased market share and establishing an expanded customer base in growth markets like China and India—which could see a doubling of its current imports of around 275,000 barrels per day. However, the large, highly-coveted European market stands to benefit the most from the new order.

Iranian crude coming on line will likely hurt some of the major oil producing countries.

As Iranian oil sent to China is similar in type to Saudi Arabian oil, that country will likely see its market share cut into the most. Some of Russia’s share may also be affected, but not as heavily, since Russia often sends China a much lighter sweet crude that is easy to refine.

During the sanction years, Iran found ways to get oil to China with little lost market share. Now, as the country ramps up production, exports to China will quickly rise to pre-sanction levels.

The biggest damage among oil-producing nations will come at the hands of the largest refining market apart from the US: Europe. Iran has greatly suffered as the EU put on sanctions. In 2011, it exported 600,000 bbls/day to Europe. For the past four years, that completely disappeared, along with all the revenues generated.

Oddly, when Iran lost the European export market, the region’s largest import sources did little to increase their market share.

Russia, for example, was focused on expanding in the crowded Chinese space. Causing Saudi Arabia to fight a two-pronged battle in Europe and China just to maintain its position. The sanctions left countries like Nigeria, Algeria, Angola, and Iraq to swoop in and fill most of the void. These will be among the new losers.

Already reeling from low oil prices, Nigeria, Angola, and Algeria are likely to be hit hardest by Iran’s return to Europe.

However, the biggest loser in the European market is probably going to be Russia. Instead of jumping on Iran’s exit as a chance to dominate the European market, Russia decided it was wiser to flaunt its power over the EU’s energy security.

That forced Europe to diversify into other markets, and begin increasing imports from West Africa and Iraq. As a result, Russian imports have been reduced by over a quarter million barrels per day. And this happened at a time when European consumption of crude was growing year over year.

Instead of increasing market share, Russia lost ground instead.

Iran Looking to Compete and Win

Enter Iran, which has a huge edge in terms of prices to Europe. Iranian crude trades at a $4 discount to competing Russian crude.

On top of that, Iran’s oil & gas industry is about to get another competitive boost.

This is due to re-negotiation of its investment contracts with the big International Oil Companies (IOCs). Under what are known as buyback contracts, the Iranian government would grant an IOC the right to explore and develop a property for a stipulated period of 7-12 years.

If the exploration was successful, the National Iranian Oil Company (NIOC) would buy back the project and take on all development and management responsibilities. The contractual investment would be paid back in full, bank charges reimbursed, and further remunerations paid to the IOC for their services.

But the IOC did not own the property and had no right to future profits, nor could they book reserves as assets on their balance sheets. Instead, the IOC could only agree with the NIOC on a pre-determined internal rate of return (IRR) on the project, usually between 12% and 15%.

This type of contract is very risky for an IOC…

Because all costs and paybacks are pre-determined, any increase in capital costs, reduced production profile, or low price environment ($15-$20 per barrel) could result in less money being paid back, or even the postponement of payments.

That will now change.

Iran has some of the largest oil & gas reserves in the world and needs to develop them. But, to remain competitive the country needs the IOCs’ help. And to get it, the NIOC needs to make investments more attractive.

Thus its new contract proposals for the IOCs will involve longer terms of development (20-25 years). This will provide more time for investment and profitability. The IOCs may also get an ownership stake in the projects, upwards of 20%, and be allowed the booking of reserves. Fees paid to IOCs will increase depending on the risks they assume in developing geographically isolated and challenging reservoirs.

By making these changes, Iran hopes to attract $280 billion in foreign investment in their oil & gas sector. And they’re all but certain to get it.

Representatives from Shell (RDS-B), Total SA (TOT), and BP (BP) have already descended on Tehran, and are speaking with Iranian energy officials as this article goes out. They booked their tickets immediately after sanctions were lifted.

The big winners of Iran’s rush back into the oil market will be consumers, specifically European refiners hungry for cheap Iranian crude. Those companies who have integrated operations will benefit the most. I’m talking about those with refining capacity in Europe and exploration and development potential in Iran. These include Eni SpA (E), Total SA, Royal Dutch Shell, BP, and Lukoil.

Additionally, this bodes well for those countries and companies looking to benefit from moving Iranian oil.

Egypt, for example, is a hub for pipeline and waterborne transportation of crude oil and petroleum products. This will increase the amount of oil shipped through the country’s SUMED pipeline and Suez Canal. And it will also provide Egypt with access to oil production for its own energy requirements. 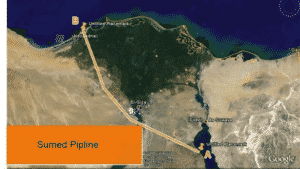 This is a key development, because after sanctions were imposed on Iran in 2011, Egypt saw a large decline in the amount of oil that passed through its SUMED pipeline.

Once Iran puts barrels back on the international market, they will likely pass through and/or be stored in Egypt. This gives the country a much-needed boost in revenues from fees collected by the SUMED pipeline and Suez Canal.

The SUMED pipeline is primarily (50%) owned by the Egyptian General Petroleum Company (EGPC) but includes minority stakes held by:

The $5.3 billion in revenue from Egypt’s Suez Canal has been stagnant since 2011.

The lifting of Iranian sanctions could not have come at a better time given Egypt’s plan to spend $8 billion to expand the canal. This is well supported by its Arab Gulf financial partners. The plan is to create a 22-mile parallel channel that would:

Additionally, those companies with large VLCC carrying capacity will benefit from the increased amounts of crude being carried by water to markets in Europe and Asia.

As Iran re-enters the oil market after its forced four-year hiatus, some players have to win and some have to lose. Katusa Research tries to paint a clear picture of who the biggest losers and winners will be, and show how investors can profit from this seismic shift in world energy dynamics.

Time will tell if we are right.

If you are in Vancouver during January 24-25th, I am co-hosting the 2016 VRIC with the good folks at Cambridge House.

Why should you come? Well for starters, we have over 2400 pre-registered attendees—so clearly we have a good following. But more importantly, I will be asking the tough questions of our speakers everyone is thinking, but are too polite to ask.

My goal is to make this the best resource investment conference you ever attend.

Give me a few hours of your Sunday and I guarantee to leave you with much to think about. The agenda is world class.

But more importantly, I will be grilling the speakers myself personally, and expect the unexpected.