Avoid the Con Artists. Here’s the Critical Demand Secret in the Copper Market

Copper is a vital element used in nearly everything around you.

It’s used for plumbing in houses and factories. Since copper is also a wonderful conductor of electricity, it is used in power lines, electric motors, wiring, cars, and appliances as well.

I’m long term bullish on copper, especially companies that produce a specific kind. Which I’ll get to in a moment.

What are the Copper Signals Flashing?

Below you’ll see the total quantity of copper discovered annually from 1990 to 2018.

Not only are there less pounds being discovered, it’s costing a lot more to find them too. Below is a chart which shows the cost of the copper discovered, based on annual exploration budgets. 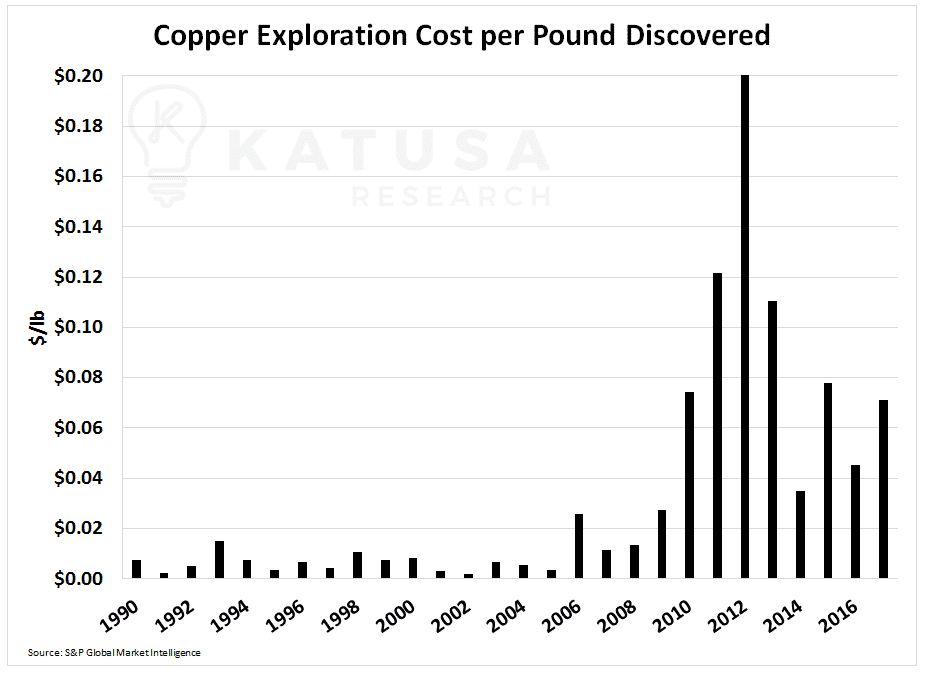 Costs have jumped from less than $0.01 per pound to $0.07 per pound of copper discovered. That’s a 7-fold increase in 2 decades.

And it’s not like you can just say “hey, we need more copper, let’s turn on the next copper mine.”

Copper production is not like the shale oil and gas sector, where you can drill multiple wells and increase the production from the same patch.

At a mine, your production is fixed. And rarely do mines achieve 100% production because things always go wrong.

Mining is a tough, tough business. And when you look at the previous 3 years, there was no major global copper discovery. For two reasons:

First – there’s less money in the sector to be spent on exploration.

That’s generally the cyclical nature of these things. Because the resource markets have been so horrible the last five years, there’s been very little money going into it to replace pounds produced.

Hence, why you’ve seen the reserve grade go from just under 1% 15 years ago to 0.37% today. As shown in the chart below. 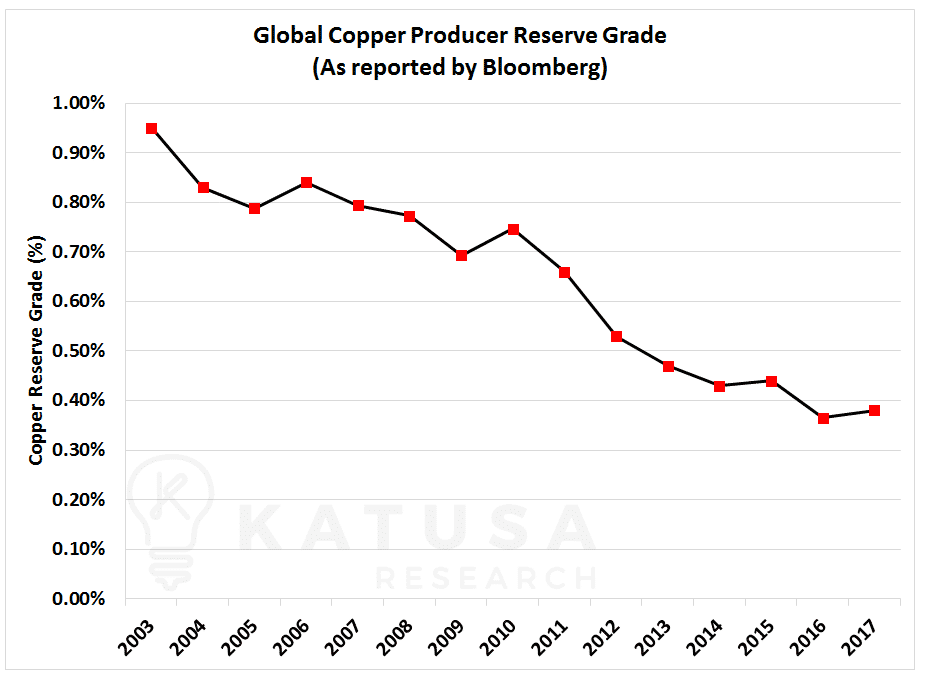 This chart gives you a good idea of how tough it’s going to be to produce copper in ten years.

And if you take a look at the copper days of supply over the long term, the supply is starting to dry up. Yet, the price isn’t responding.

The smelter turns that copper concentrate (which is usually anywhere between 22.5 – 30% copper) into the copper we use in buildings and manufacturing.

When a copper producer sends its concentrate to a smelter, it can contain nasty stuff like mercury, arsenic, and antimony.

When copper concentrate has high levels of these “nasties,” it is called “dirty” concentrate.

A producer can get “penalized” for dirty concentrate (meaning it gets less per pound of copper than it does for “clean concentrate”). And some smelters flat out refuse dirty concentrates when there is an excess supply of it.

The global smelters are in high demand for “clean concentrate.”

You probably didn’t know this, but for years, smelters have been dealing with this secret by “blending” the dirty concentrate with clean concentrate.

Chile is the world’s largest copper-producing country. And it’s giant Escondida mine is showing higher nasties compared to when it first started producing many years ago.

Many of the large copper-producing mines will go through the same thing.

Nobody is talking about this, but they will be soon.

This is a small nuance that can have huge effects on a copper investment. A company can have a lot of copper in the ground, but dirty concentrate production can kill it. And your investment.

Smelter logistics play another important role. Where will the copper company send their copper concentrate to? Access to a port is just one of the many concerning issues to check off the list.

What happens if the closest smelter already has enough copper concentrate? This will mean additional transportation costs and lower copper producer profits.

To sum it up I am very bullish on top-tier, world-class copper deposits that have the following qualities:

It’s by owning assets with those qualities that safe, large capital gains will be made. It’s by owning those assets that copper investors can make a fortune in the electric vehicle boom.

And, as the metallurgy and the geology changes, copper has a lot more impurities in it. So, the copper price the producer receives will be subjected to additional penalties stemming from down blending and treatment charges by the smelter.

Smelters are going to need clean concentrate to blend with this dirty concentrate.

You have to understand the metallurgy.

The Copper Buyouts Have Begun

In this phase of the cycle, I think we’re going to continue to see some major consolidation from the bigger companies.

Take the recent $6 per share offer for Nevsun (one of my top 2017 recommendations) by China’s Zijin Mining. Because they’re seeing exactly what I’m publishing and they know internally that they haven’t replaced their reserves that they’ve produced.

And now, large copper producers don’t want to play a game of catch up which could take upwards of 15 years. Right now, they can buy something at a 50%, 60%, or 70% discount to what it would cost them to go and find themselves.

That’s where I think the sweet spot right now in the current market is.

And it’s where I’m going to be putting my big bets.

Could There be a Copper Wipeout?