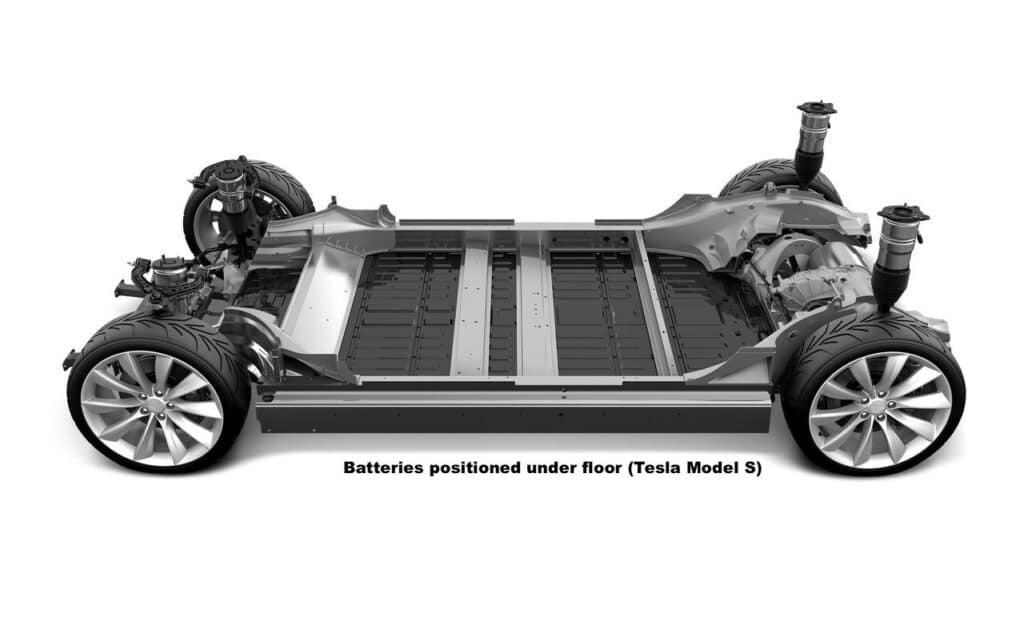 As electric vehicles have grown in popularity over the past decade, the term “range anxiety” has become an obsession in the auto industry.

In fact, you could say the race among electric car makers like Nissan, Tesla, BMW, and Chevy is the race to become the world champion of overcoming range anxiety. A big breakthrough in treating this “disorder” would be worth hundreds of billions of dollars.

Range anxiety is the fear drivers get from knowing the battery in their electric car could run of out of charge… and leave them stranded far away from a charging station.

Although electric cars have come a long way over the past decade, they are still light years behind internal combustion engines when it comes to fueling infrastructure. Batteries drain quickly and they must be recharged.  The popular 2016 Nissan Leaf electric car averages 107 miles per charge on its 30kWh battery. Most gasoline-powered cars enjoy ranges over 300 miles.

A limited number of miles per battery charge is a big deal because regular gas stations are much, much more common in most places than charging stations. In most areas, the guy leaving his driveway in an electric car has a lot less options for refueling than the guy in a Chevy Suburban.

You might want to do your part to save the Earth, but if doing that means constantly worrying about getting stranded with a low battery, you’ll probably choose the gas guzzler. Most folks choose not to deal with “range anxiety.”

This aspect of owning electric cars is one of the biggest obstacles to their widespread adoption.

Some of the smartest people in the world are working on overcoming this obstacle. They have access to billions of dollars in capital to further research and development.  After all, they know long driving ranges and abundant charging stations will create a huge boom in electric car adoption. Again, a big breakthrough in battery technology – something that massively increases the range of EVs – would be worth hundreds of billions of dollars.

Advancements in batteries have – and will continue to have – large effects on certain niche resource markets.

It’s estimated that that nearly 1 million new electric vehicles will be sold in 2017. Below is a chart that shows the enormous increase in EVs on the road since 2010. Note the explosion in Chinese sales. The world’s most populous country is adopting EVs in a big way. 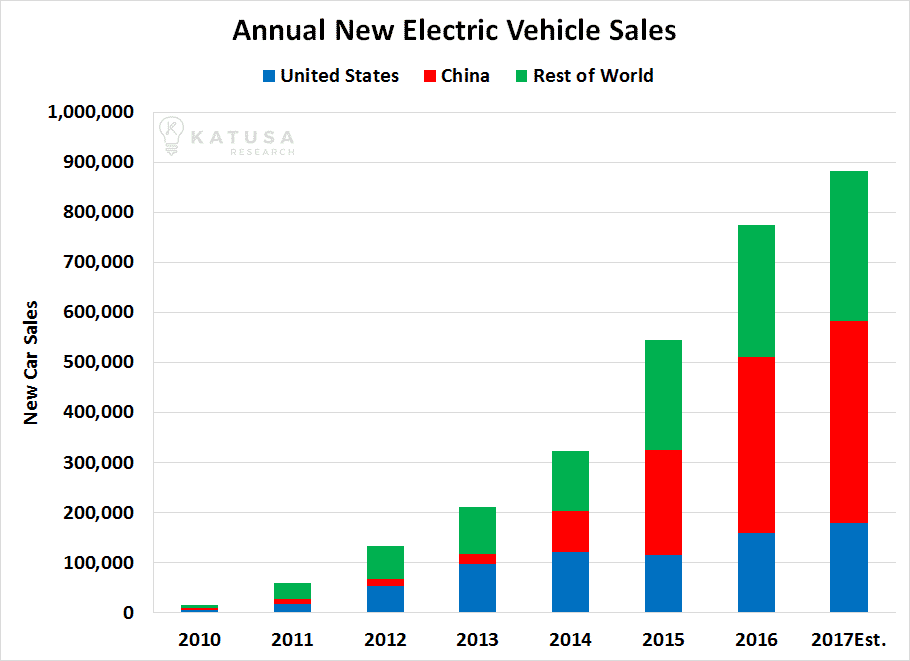 A driving factor in building and selling affordable electric vehicles is bringing down the cost of car batteries. Since 2008, the cost of an electric car battery has declined by 80%. Below is a chart that shows this dramatic decline: 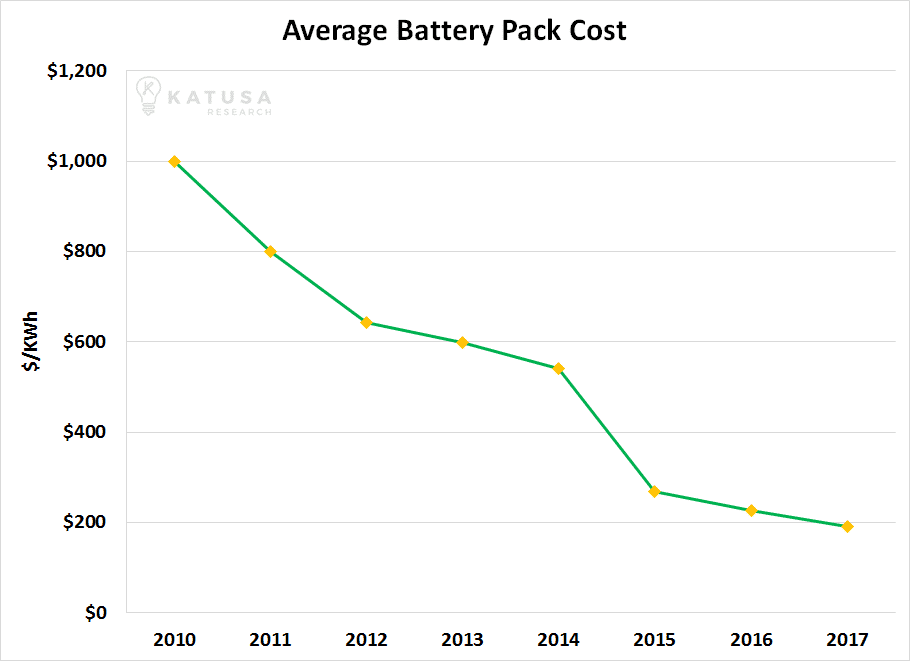 For the most part, electric car batteries have one of three different chemical compositions. One is called NCA (short for Lithium-Nickel-Cobalt-Aluminum and one is called NMC (short for Lithium-Nickel-Manganese-Cobalt. Both of these batteries are composed of lithium, cobalt and a few other trace metals such as manganese and iron. The third composition is called Lithium-Iron-Phosphate, this battery is quickly being phased out as it is less efficient than NMC and NCA batteries.

Because of those properties, lithium is the preferred ingredient for batteries that need to be as light and as powerful as possible.

Due to demand created by the electric vehicle boom, lithium has been an incredibly hot sector. Albemarle, considered by many to be the “ExxonMobil” of the lithium world, is up over 130% since January 2016. I have had more meetings than I can count with companies trying to get me to buy into their lithium projects.

While some lithium stocks may produce good returns for shareholders in the future, it’s not an undiscovered sector. There is a lot of money chasing returns in lithium. But that’s not the case with the little-known resource called cobalt.

How the EV Boom Will Create Increased Cobalt Demand

Cobalt is an element with the symbol Co. It’s a metal that is typically produced as a by-product in copper and nickel mines. Cobalt is a main component of both major battery types used by companies like Tesla in the United States and soon BYD in China. You know Tesla. But you might not know BYD, which is the world’s largest EV maker. (in 2016, Tesla sold around 76,000 vehicles while BYD sold over 100,000). It dominates the huge and growing Chinese EV market and even counts Warren Buffett as one of its prominent shareholders.

Tesla uses a battery similar to the NCA battery type. An average Tesla Model S battery of this composition will require nearly 30 pounds of cobalt. 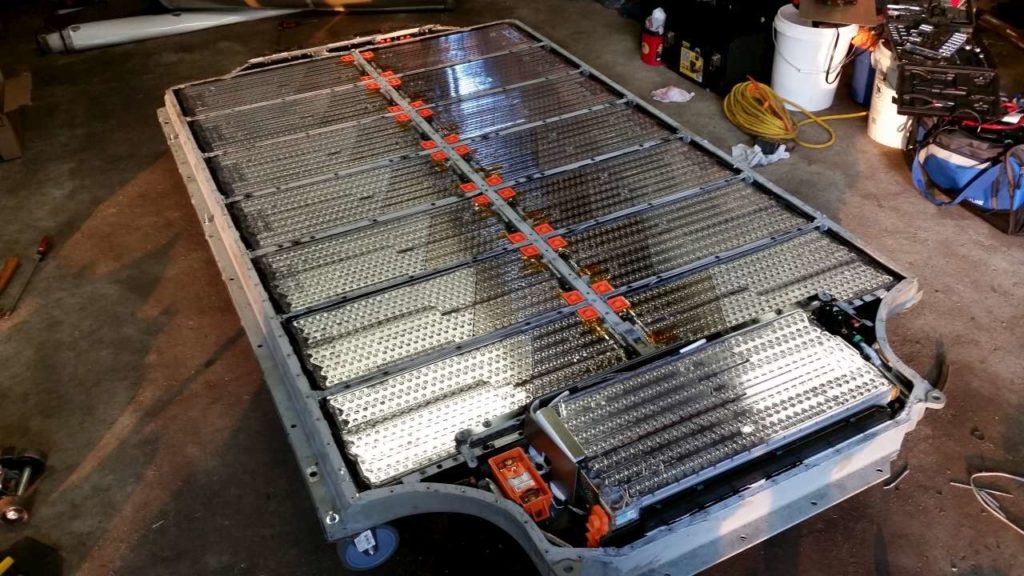 Until very recently, BYD used only the less efficient and cheap Lithium Iron Phosphate battery. Thanks to a change in how the Chinese government subsidizes its electric vehicles, I believe BYD will be making a big shift towards the NCA and NMC battery chemistries. Well known companies like Nissan and BMW use the NMC battery type. Depending on the exact battery chemistry, these NMC batteries require between 13 and 40 pounds of cobalt.

In 2016, there were roughly 2 million EVs on the road. This means that 10.9 million new EVs will require a battery that needs somewhere between 13 to 40 pounds of cobalt a piece. Based on market share for each battery type, this translates to 150,000 tonnes of new demand.

Aside from batteries, cobalt is used in items like magnets, steel, and super alloys. To call the cobalt market a niche market would be an understatement. In 2016, global cobalt production was 116,000 tonnes, while cobalt demand was approximately 94,000 tonnes.

To put this in perspective, the global demand for copper in 2016 was 23 million tonnes. To achieve the IEA’s 12.9 million EVs on the road by 2020, the supply of cobalt will go into deficit by 2019 and be 50% under supplied by 2020. This surge in demand will be very rewarding for shareholders of the right companies involved in this market. If you’re interested in profiting from the EV boom, consider owning cobalt suppliers.

P.S. My team and I are putting the finishing the touches on a full research report on a company that is by far the world’s best cobalt play. It goes out to members of Katusa’s Resource Opportunities very soon. To come on board as a subscriber, click here.