Dinner with a Billionaire Wine Connoisseur

Over an amazing 40+ career in the mining industry, Pierre Lassonde has pulled off a lot of incredible deals.

But just this month, I saw what might be his most impressive move yet: He got Rick Rule to pick up a big dinner check.

If you’ve invested in the mining sector for a while, you know who Pierre and Rick are. Pierre is the billionaire founder of the huge mining royalty firm Franco-Nevada. Pierre is a legend in the resource business. Rick Rule is the CEO of Sprott U.S. Holdings… and another resource investing legend. He’s also notoriously smart with his pennies. It’s tough to pin a big dinner check on him.

I’ve been on the road for most of the last seven weeks, and the grueling flight schedule involved with multiple site visits does take its toll. But a dinner with Pierre and Rick in Toronto made it worth it.

Pierre is a wine connoisseur. He picked out some very expensive and very good wines. Hearing firsthand over a great cabernet sauvignon how Pierre and his longtime partner took a struggling energy company with $2 million in cash and a market cap of less than $10 million and transformed that company into $15 billion mining powerhouse was a great experience. (And I loved it that Pierre got Rick to pick up the check.)

Pierre’s passion for life and business is contagious. He’s one of the most entertaining people I’ve ever had dinner with. Anyone could have taken away several valuable lessons. For example, regardless where you are in the world, make sure you get home for the weekend to be with your family—a new rule of mine.

I’ve been in the industry for 15 years, and this is one of the funniest stories I’ve ever heard.

Before our legend was a billionaire wine connoisseur, he was an ambitious young resource entrepreneur looking for his big score. And like most mining entrepreneurs, he organized a site visit to showcase the potential of his projects.

Well, not only was this his first mining site visit, the company did not have a lot of money left in the bank account… and really needed to impress its investors.

They wanted to impress one large fund manager in particular. He was out of Europe… and was considering the company as an investment. Pierre wanted to get him to invest in the company and help the struggling venture.

As this large fund manager checked into the hotel, Pierre had a full slate of two days with geologists and site tours planned.

As is customary on site visits, the group had dinner together before the next day’s activities.  The large fund manager didn’t show up to dinner.  Not a good start.

The next morning, the group waited for the big fund manager to come down from his room. He was one hour late. So, Pierre phoned the fund managers hotel room, and was told, in a European accent:

Pierre was really down, but since they already had the day’s trip organized, they proceeded with the site visit.

“I am sorry Pierre, I cannot go on today’s site visit, I am extremely busy”

Feeling deflated, our young entrepreneur moved forward with the planned site visit.  He wondered why a fund manager would travel all the way from Europe to Nevada for a two day site visit and not attend either day. He found out the next morning.

As a good host would do, Pierre wanted to say goodbye to the European fund manager who he intended on impressing and getting a lead order from.

Pierre used his last few moments to try to obtain a lead order from the fund manager. Pierre said it was unfortunate that the fund manager was too busy to make the site visits. They contained so much potential.

The fund manager said to him, “This was the most pleasant site visit, and very promising!”

After hearing all that from Pierre, I asked, “Did you get the lead order from him?”

Pierre responded “I did, and he made a fortune!”

That was one of many, many stories over a two hour dinner.

But the dinner got me thinking about our mining legend.  What more can he and his company do in the mining space?  Lots.

I’ve tracked the mining space for many years, but one space I’ve had a keen interest in has been the royalty and streaming business.

It is simply one of the best sectors to be in.

For example, since Jan 1, 2008, the royalty/streamers index I created have significantly outperformed both the gold mining index and the actual price performance of the yellow metal itself.

The chart below shows how the royalty index (in yellow) has delivered over 200% gains since Jan 2008, whereas the GLD (Gold ETF backed by “gold”) has returned just under 50% and the actual miners have delivered negative returns during the same time. 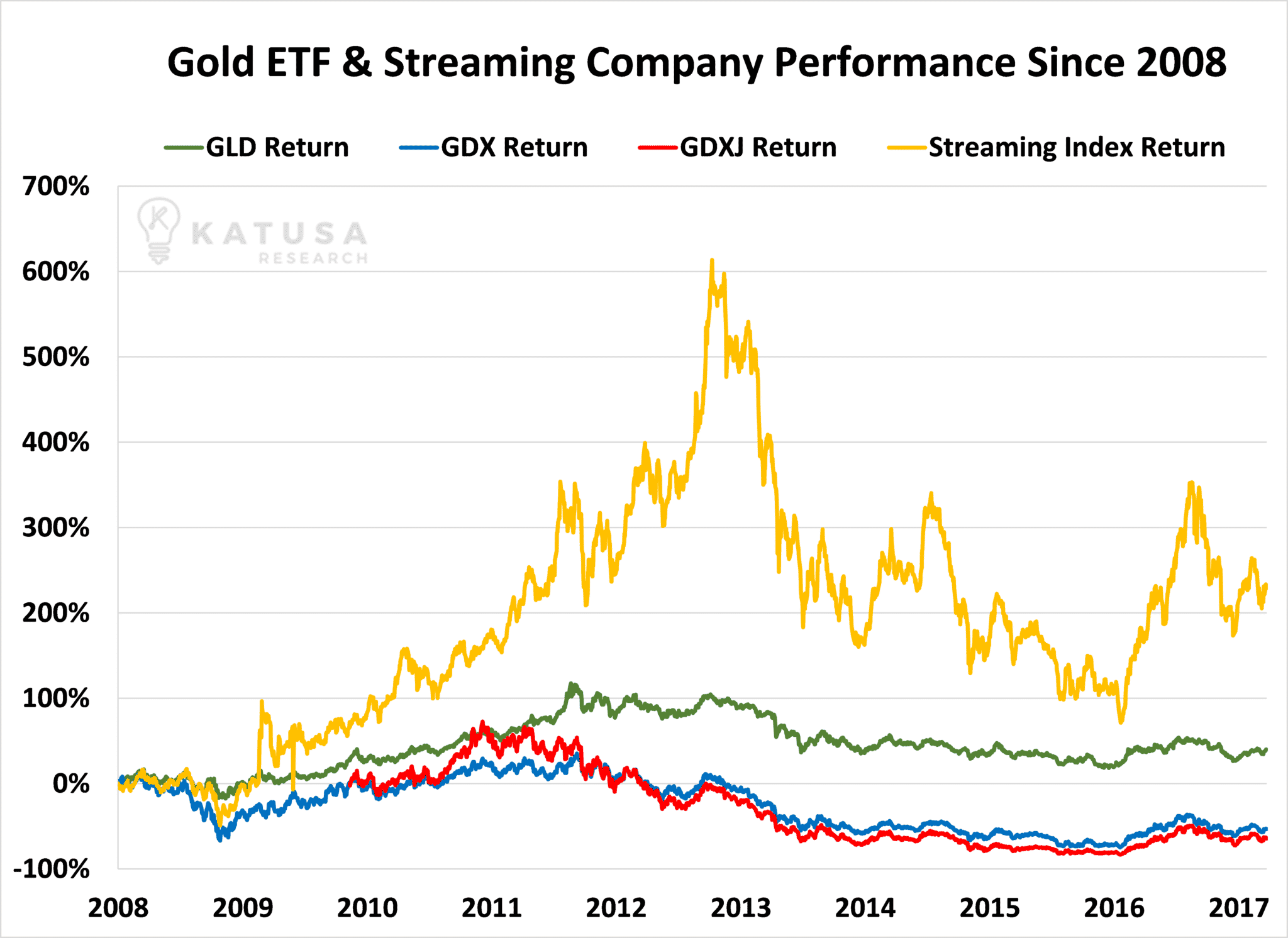 This one chart tells us that we need to be exposed to the royalty/streaming companies.

But many people have stayed away from the royalty/streaming companies because they appear to be expensive relative to the miners using traditional financial metrics.

Katusa Research has spent months working on our “Royalty Buyout Report” that we will publish on April 5, 2017.

In this report, we will break down all the different financial metrics you need to know about the sector. Most importantly, in this report we will highlight the one royalty company we believe will be bought out—and one I personally plan on buying.

And, you’ll find out who I believe will be the buyer.

I think the next time I have dinner with our Billionaire Wine Connoisseur, he will have another exciting story to share.

Please don’t miss this the April edition of Katusa Resource Opportunities, as I believe it will be the most important issue published to date.

You can learn more about becoming a member right here.

Blindfold Profits: The All Time Greatest Business to Make 10 to 20 Times Your Money