HomeResearchHow IoT is Disrupting Mining in a Major Way

How IoT is Disrupting Mining in a Major Way 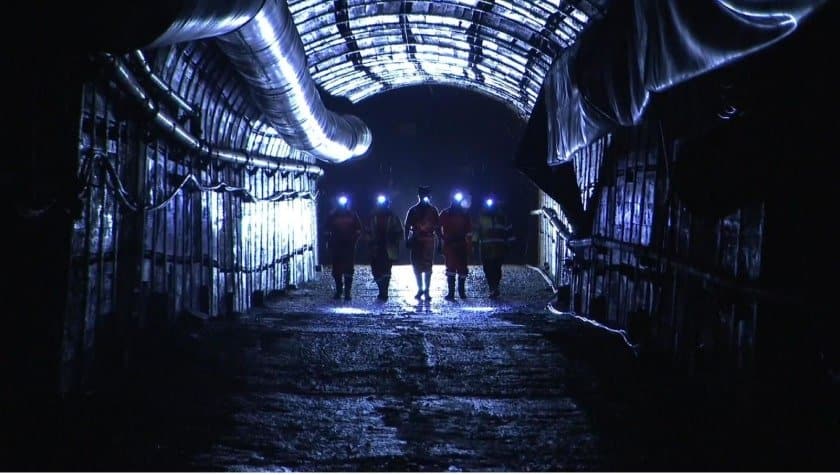 It’s one of the biggest themes in the investment world over the past 10 years.

Below is a chart which compares the share price returns from 2002 until 2011.

In the late 90s and early 2000s the Internet took the world by storm. Everyone wanted to be online.

Most businesses that were too afraid to adopt to the new world went the ways of Blockbuster and eventual bankruptcy. But where is the next big disruption on a global scale?

Is it Crypto? Cannabis? 5G?

Those manias have already come.

We have now entered Internet 2.0, “The Internet of Things”, or IoT for short.

The Internet of Things will give us more than just the ability to watch streaming shows on Netflix or Disney+.

Right down to the minutia and finer details, to reduce operational costs.

A well has pumps that are pumping oil two thousand feet below the earth’s surface and a mile away from the wellhead.

Now let’s say there’s only a trickle of oil coming out from the wellhead… Does it mean the well is dry and there’s no oil? Or does it mean the pump is malfunctioning?

Thanks to the internet 2.0, the pump can be fitted with a sensor that can monitor data points like:

Think of the sensor as a “Fitbit” for the oil well.

These sensors send information to the control center that determine (in real time) how best to optimize the operation.

If a part breaks, the pump can interact with the company’s database and send an order for a replacement part.

It may sound terrifying, but this is the future.

The rise of the internet and all the connected devices are generating another massive investment theme in the Internet of Things (IoT).

Currently, there are over 30 billion devices connected to the internet and this number is forecast to rise to 50 billion by 2030.

And according to the accounting firm PWC…

Between 2015 and 2020 businesses will invest $6 trillion into Internet of Things solutions.

The amount of info that will soon be available for data collection and analysis is profound.

Whomever can collect and process this data, will be a big winner.

Information is an Incredibly Valuable Asset

Prior to 2010, a jetliner used to collect information at 3 points from 30 sensors during the flight.

Today, a GE jet engine collects 5,000 pieces of information every second of every flight.

It’s estimated that within the next 5-10 years there will be well over 50 billion devices connected to the internet. And this is a conservative forecast… 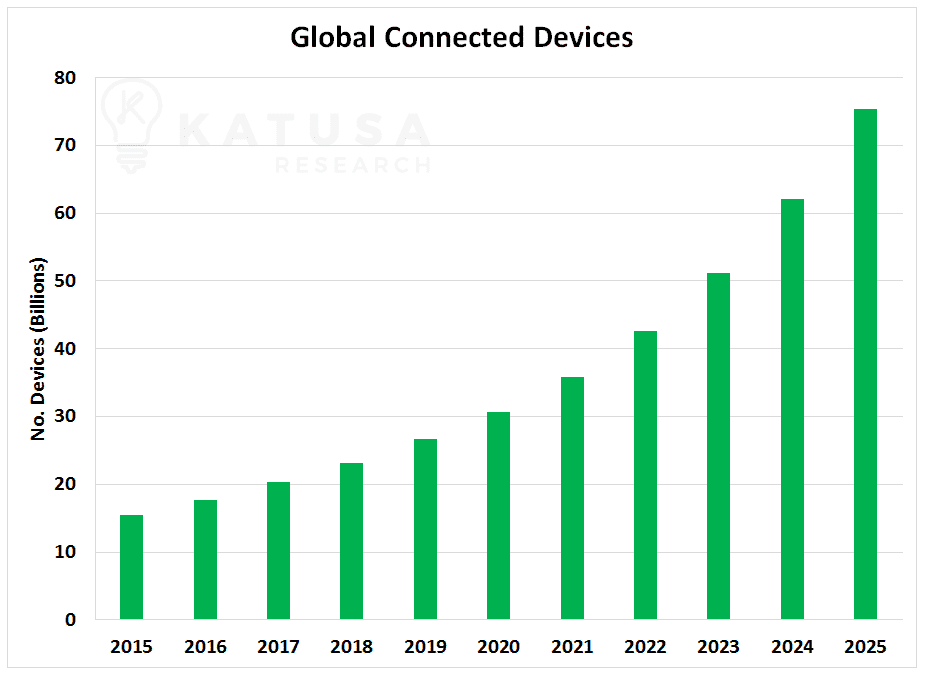 In 2020, consumers, governments and industries will invest $1.5 trillion in this space.

The most valuable commodity today is actionable information.

Spying on the Biggest Investors in the World

Every plane in the world has its activity tracked.

Take Quandl for example. It’s a company that specializes in harnessing alternative data sources. It showed the private jet of Occidental Petroleum fly around to all of Anadarko’s different oil fields.

And then it showed Occidental’s plane flying to Omaha, Nebraska.

Here’s why this data matters…

A few days later, Occidental and Berkshire Hathaway went public with a deal to buy Anadarko Petroleum for $38 billion.

That isn’t inside information. It’s the new playing field.

This is Next Level Intelligence

While the Occidental deal was a cool example on its own, it goes a lot deeper than that.

Right now, there are billions of devices connected to the internet.

It’s not just cell phones and computers that are connected. We’re talking devices in oil fields, manufacturing facilities and in warehouses like Amazon’s packaging centers.

Intel, one of the world’s largest technology firms, states that there could be up to 200 billion connected devices by 2020. 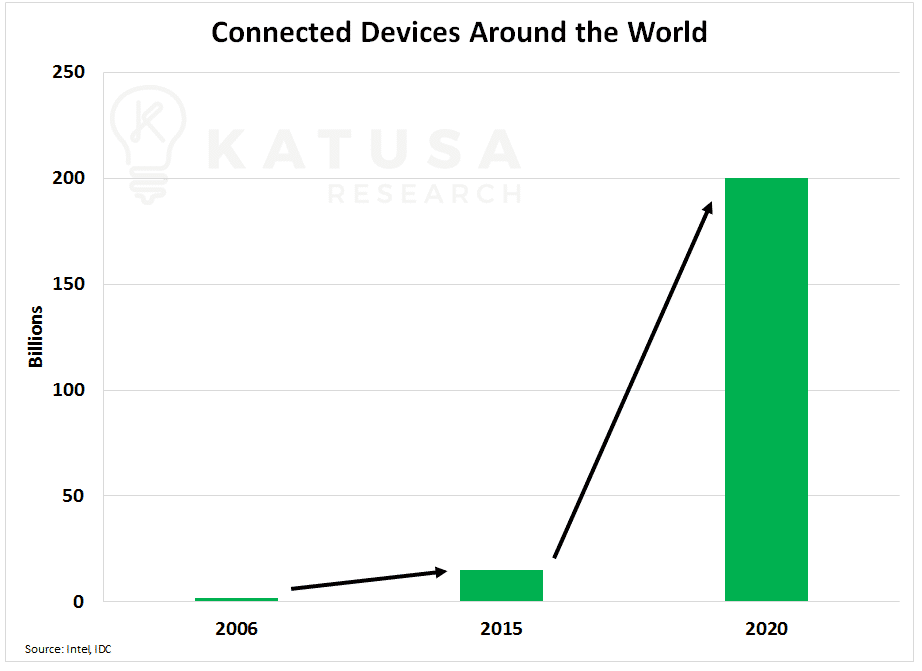 These connected devices have the potential to send and receive info on literally anything that can be measured.

In 2018, there were over 30 billion connected devices. Below is a chart which shows what industries are using the IoT (Internet of Things) the most. 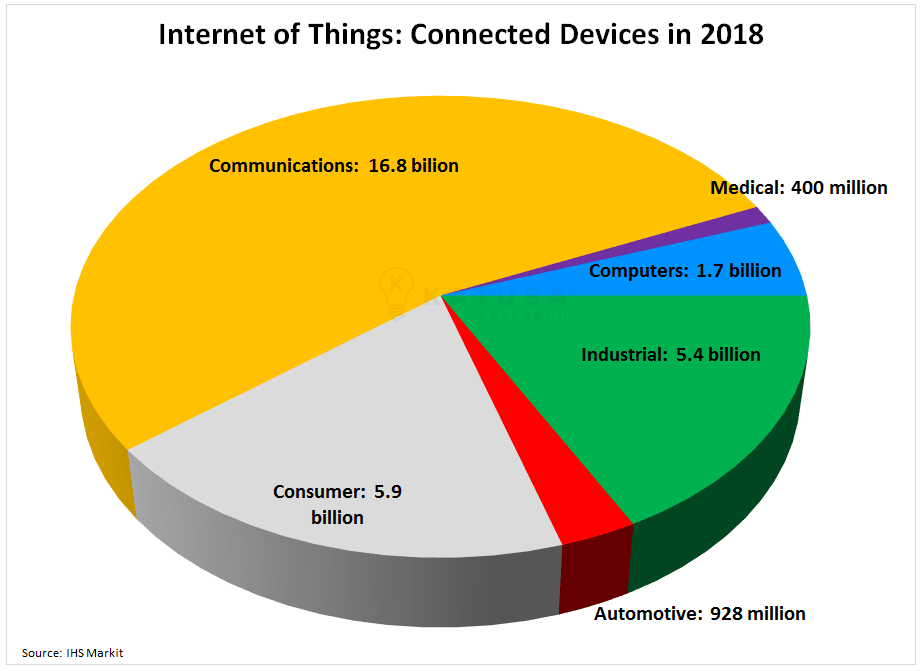 The Internet of Things is not just about using products like Roomba or a Google Nest in your home.

In the resource space especially… it’s about using predictive software to know not only when parts will break but why they break.

Did you know that in United States alone, 30% of energy consumed in commercial buildings is wasted?

I See a Big Opportunity in the IoT With Data Processors

These are the companies that can take massive quantities of data and process it intelligently into solutions that improve the way society and businesses operate.

Software will unlock massive savings for many companies.

I know that to some of you, today’s technologies maybe scary…

Even I regularly get Katusa Research’s full time in-house tech guru, Simon, to help me with issues with my computers on a regular basis.

But the key is to embrace the learning process.

…or at least be receptive to it.

Many mining companies are far ahead of their peers when it comes to finding a new edge in their operations.

And we’ve found one company that does that in spades for companies in the resource sector (and more).

We published our research and recommendation on this company to our subscribers recently. It focuses on improving efficiency and optimization of already operating equipment or facilities.

Its key assets are proprietary computer programs. Think of them as the “super brain” of the business.

These software programs help solve many of the world’s most important issues today, like:

Think of it as the ability to create an ultra-precise, virtual model of an oil pipeline, petrochemical facility or even a power plant.

(And to actual military grade specs — the U.S. military is a client).

And we get two additional upside lifts if the stock prices rises (and not by much from today’s levels).

That’s triple the upside for subscribers versus buying in the open market.

If you’re not a subscriber to Katusa’s Resource Opportunities – my premium newsletter – where I reveal the exact plays I’m putting a large part of my net worth… consider becoming one right here.

The Internet of Things is the real deal and I expect it to disrupt the way many industries operate today.

It’s my fiduciary duty to subscribers to find the best investments for us.

A Potential Fire Sale in High-Quality Oil and Gas Assets