But I root for financial disasters.

I root for stock crashes, government debt defaults, and currency crashes. I like to see chaos in commodities, debacles in the Dow, and bad times for bonds.

I know it’s not popular to say you root for chaos. I don’t wish ill on anyone. But the simple fact is that financial disasters produce the world’s greatest investment opportunities.

If you’re interested in making huge returns on your capital, never let a good crisis go to waste.

Most financial advisors will tell you that making 10% in the stock market is a good year. But if you play your cards right during a crisis, you can make 100%…even 1,000% in a year. I know because I’ve done it many times. I once made 1,850% on an investment thanks to a crisis.

Below, I explain why crisis and chaos can lead to triple- and quadruple-digit returns… and how you can make huge, politically incorrect profits as a result of them.

One of your ultimate goals as an investor is to buy assets for less than they are really worth. This goes for real estate, stocks, commodities, bonds, and every other investment. Put another way, our goal as investors is to buy bargains.

However, buying real bargains is difficult. You rarely see them.

This is because the financial market correctly prices most assets most of the time. Most of the time, stocks, bonds, and commodities trade for approximately what they are worth.

The key phrase in that last sentence is “most of the time.”

There are billions of dollars to be made in the difference between “most” of the time and “all” of the time.

Financial academics will tell you the market correctly prices assets all of the time. They’ll tell you people always make rational financial decisions.

But that’s hogwash. Academics don’t invest for a living. I do. And I can tell you that people tend to do crazy, emotional things…especially when it comes to money and investments. I can tell you that governments love to meddle in the financial markets. Most government bureaucrats don’t know anything about money and investments. (That’s why they are bureaucrats.)

Markets have a natural ebb and flow. They rise and fall as economies change. Throw in the actions of emotional people who do crazy things AND the meddling of financially ignorant governments, and you get a variety of things.

Most importantly for making huge investment returns, you get markets that go through booms, bubbles, panics, and crashes.

These examples are just from the past 20 years.

You also have the market crash that accompanied the start of the Great Depression. Stocks lost over 80% of their value.

A market crash produces huge opportunities because it introduces incredible amounts of emotion into the market.

During a crash, terrified investors sell first and ask questions later. They sell assets with no regard for their underlying values or ability to produce cash flow.

During crashes, the price of assets becomes “unhinged” from the value of assets.

This, of course, means you can buy bargains during a crash. If you can keep a level head while others are losing theirs, you can buy at fire sale prices.

Another great example is the well-known gold company NovaGold. At one point in 2007, NovaGold traded for $16 per share. It fell to under $0.50 a share during the financial crisis. As the crisis subsided, NovaGold soared past $14 per share (more than a 28-fold gain).

My personal favorite example of crisis creating opportunity is Copper Mountain Mining. It’s one of the largest copper producers in Canada. The company had a successful IPO in May 2007, but fell from over $2 a share to below $0.40 per share during the financial crisis. By 2011, the crisis was over, and the stock climbed over $7 per share. I personally made over 1,800% on that move 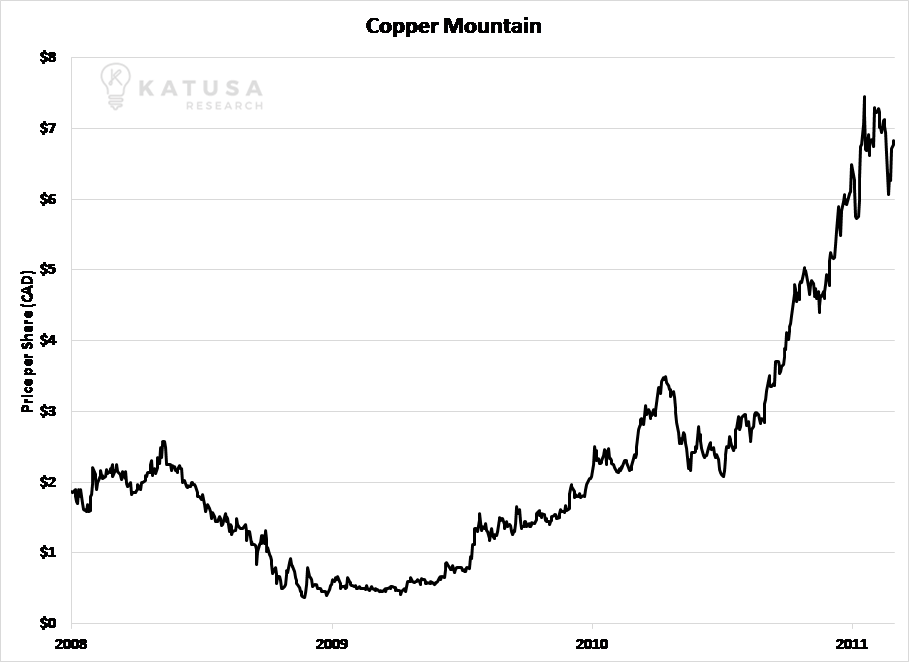 These examples show that when you buy assets at depressed prices, they can return hundreds–even thousands–of percent when the market returns to normal. Depressed assets can shoot higher like coiled springs.

Remember, when an asset sells for a 90% discount to its intrinsic value, it has to climb 900% in order to get back to normal.

When most investors hear about a crash in a market, their instinct is to sell or completely avoid that market. Great investors learn to develop an instinct to buy into those kinds of markets. They learn to run towards a crisis. They know it could present the rare opportunity to buy valuable assets at extreme bargain prices.

There’s a good reason legendary billionaire investor Warren Buffett says one of the secrets of success is to “be greedy when others are fearful.”

There’s a good reason a quote attributed to the legendary financier Nathaniel Rothschild is “buy when there is blood in the streets.”

We’re wise to follow the advice of these two legends.

It’s not politically correct to say you profit from financial disasters.

It’s not going to get you invited over for tea.

But I don’t make the rules. I just play by them. And those are the rules.

A crash introduces enormous levels of emotion in the market, which leads to indiscriminate selling, which “decouples” prices from values and creates investment bargains.

The sooner you start seeing financial disasters as the breeding ground of huge opportunity, the sooner you’ll make huge returns on your money. And you’ll never let a good crisis go to waste.

We use cookies to ensure that we give you the best experience on our website. If you continue to use this site we will assume that you are happy with it.Ok