HomeResearchOilWhy “Peak Oil” or “Peak Anything” is “Peak Nonsense”

Why “Peak Oil” or “Peak Anything” is “Peak Nonsense”

I’m sure you’re familiar with this serious problem…

The world is facing a supply shortage of crude oil, the lifeblood of the modern economy. Around the world, oil fields have reached “peak” production. Experts are in in the mainstream press, issuing grave warnings: We’re running out of oil. If we don’t find another fuel source, we’ll have a global calamity.

Your first thought of this story surely goes back to around 2006. Back then, big name experts like Matthew Simmons and T. Boone Pickens grabbed everyone’s attention with proclamations that we’d hit “Peak Oil,” and prices were set to rise dramatically, which could cripple the global economy.

Most people don’t realize it, but for generations, all kinds of “experts” have been claiming we’re about to run out of oil. Unless you know your oil history, you wouldn’t have known that Simmons and Pickens were whistling a very familiar tune.

You see, claims of “peak oil” and “peak this” and “peak that” have been around for a long time. Falling for them is one of the most common errors in the entire resource market. But if you brush up on your history, you’ll learn to associate terms like “peak oil” or “peak gold” with “peak nonsense.” Here’s why…

The Worst Bet in The World

You can say a lot of bad things about the human race. We pollute the environment. We fight wars over silly things. We created reality TV.

However, you can’t say we aren’t incredibly inventive and resourceful.

Human inventiveness and resourcefulness has produced manned space flight, computers, cars, artificial hearts, the telegraph, the smartphone, the microwave oven, and millions of other useful things. It is the driver of human progress.

If you take a few minutes and think about that progress, you’ll realize why betting on “peak anything” or a crisis brought on by a resource shortage is a very bad bet.

Betting on Substitution, Conservation, and Innovation is far more likely to pay off.

Frightening claims that we’re running out of resources is older than the internal combustion engine. In the late 1790s, an English cleric and scholar named Thomas Malthus claimed the world’s population was set to outgrow its ability to feed itself. The alternatives to the trend of the day were either reduced population or famine.

Mathus’ claims greatly influenced the thinking of the times. Yet today, his thinking is largely mocked. Instead of a shortage of food, we got more than we could eat.

The introduction of mechanized farm equipment, advanced seeds, and fertilizers have helped mankind create an abundance of food. In North America for example, these innovations have increased crop yields per acre by more than 400% over the past 80 years. These yields would be unbelievable to a farmer working in Malthus’s time. They would strike him as what we call science fiction.

The changes in farming happened slowly over the course of centuries. But when a natural resource experiences a short-term price spike, huge changes can happen in just months and avert major problems.

This is thanks to Substitution, Conservation, and Innovation.

You can see the power of substitution in your own life. When the price of a resource soars, we find cheaper alternatives. It’s our natural reaction to high prices.

When the price of a resource soars, people find ways around the prohibitively high prices, just like water finds its way to the lowest elevation.

You see this kind of conservation already in areas with limited water resources, like California. It’s an effective tool for preventing shortages. (To be clear, I’m not saying I support government intervention in markets, I’m simply pointing out it’s a fact of life.)

Lastly, we have the most powerful tool of all…

The story of mankind is a story of constantly finding better ways to do things. These progressions often leap over resource concerns and render them non-issues.

Instead of using candles to light our homes, we use electricity. Instead of riding around in horse-drawn buggies, we use cars. Instead of crossing oceans on ships, we fly over them in planes.

As for a very recent example of innovation alleviating a “resource shortage,” consider the innovations made in the horizontal drilling and hydraulic fracturing of shale fields.

In 2005, resource shortage concerns were high in the U.S. In the early 1970s, U.S. oil production reached nearly 10 million barrels per day. After that, most of America’s “easy oil” had been tapped and production entered a long decline. In 2005, U.S. oil production hit its lowest level in more than 50 years. Meanwhile U.S. oil demand was near all-time highs.

This meant the U.S. had to import more oil from foreign sources than ever… which left it more vulnerable to oil supply disruptions than ever. Access to oil was becoming America’s Achilles heel.

It was around this desperate time that a gift from the heavens landed in Uncle Sam’s lap. Or more accurately, a gift from innovation.

In the 90s, a small group of Texas oil drillers led by a man named George Mitchell pioneered the use of shale fracking technology. The technology allowed Mitchell to drill into oil-rich rock layers, fracture them, and extract large amounts of oil and gas. The technology showed signs of success back then, but it was in its early stages.

By 2005, the technology was advanced enough to be incredibly successful. Mitchell became a billionaire and fracking technology was applied across the country to great effect. Through the application of fracking, the bear market in U.S. oil production turned on a dime.

As the chart below shows, U.S. oil production went from its low of 5 million barrels of oil per day to 9.4 million barrels per day in just seven years. It was stunning production growth… the fastest growth a major producing country had seen in years. 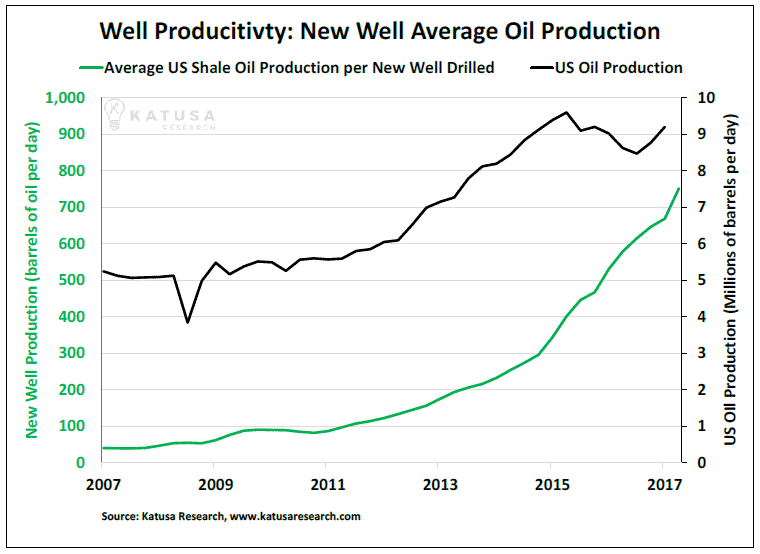 Most of this production growth came from new innovation. The green line in the chart above shows that production per well has increased 10 fold over that decade. You can thank massive increasing in drilling technology for this. The reasoning is simple, oil and gas companies are profit driven enterprises and will do whatever is necessary to add value to its share price.

Technological changes such as reservoir modeling, horizontal drilling, and hydraulic fracturing have completely redefined and improved oil and gas production, both in the United States and abroad.

This had profound impacts geopolitically as well. As U.S. production soared, its vulnerability to foreign sources plummeted. U.S. imports from OPEC (aka “the Middle East”) declined from 5.6 million barrels to 3.6 million barrels. This represents a 37% drop in foreign oil reliance from 2007 to 2017. 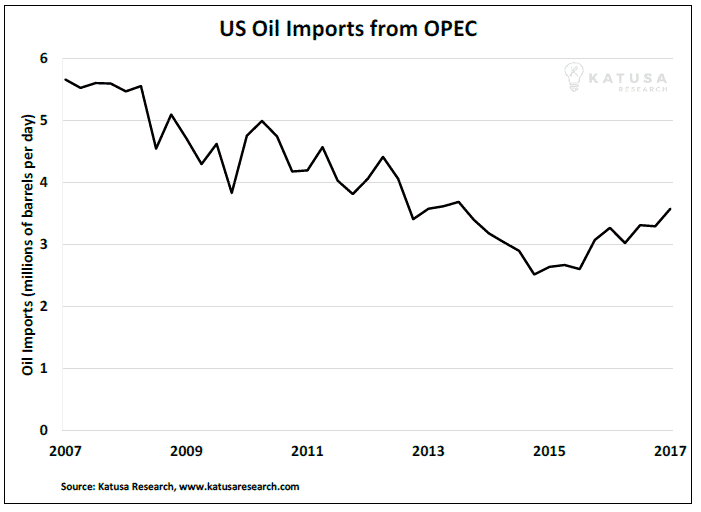 We are in the early innings of a major technological energy revolution. For example, just a decade ago, completing a 12 stage frac was science fiction. We are now completing over 10 times that amount, with 10 times more sand and pressure. Pin Point fracturing is the new catch phrase you will hear about in the coming months and years.

North American innovation is currently being adopted in China (4th largest oil producer in the world) and many Middle Eastern oil and gas rich producing nations. I track these developments closely.

My subscribers are familiar with these game-changing advances in technology because I recently brought a film crew with me on site to get a look at a company that is at the forefront of exactly this type of innovation.

When You Hear “Peak” Anything, Do This

The next time you hear claims of “peak this” or “peak that,” don’t fall for it. Someone is almost surely trying to sell you something you don’t want to buy. Protect your wallet and your portfolio and remember the driving force of human progress. A near-term or even long-term shortage of a resource is no reason to panic.

P.S. My subscribers are no strangers to the leading, innovative junior company in the North American oil and gas industry. This soon-to-be powerhouse stock partnered with one of the top well technology companies in the world and it’s poised for tremendous upside.

I’ve put millions of dollars in the market accumulating shares, and in this special report, I’ll show you why I’m so excited about making money from it.