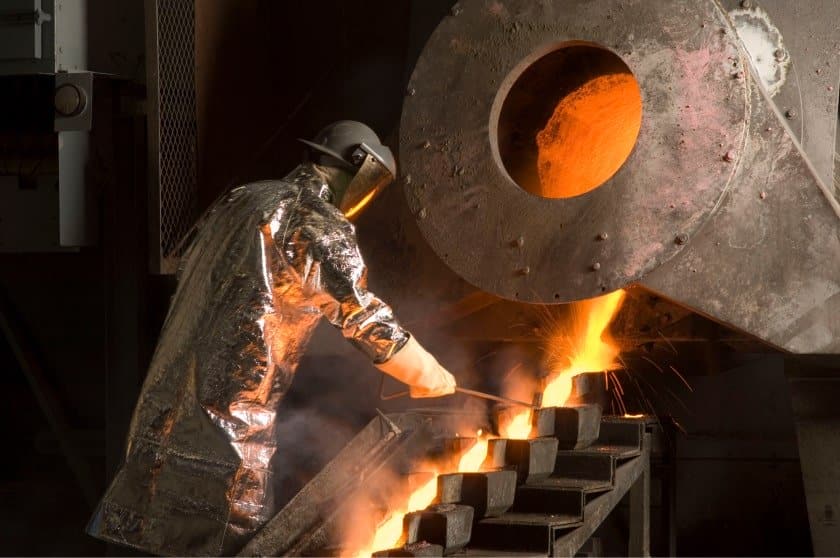 Even the gold bugs are getting rattled.

On the other hand, profit bugs are on the constant lookout for opportunity in echo markets. This is the time when the market is rewarding strong hands and shaking out weak ones.

So if you’re coming from a position of strength (loaded with cash, paying close attention) then your time to strike and cash out will arrive.

I know I sound like a broken record in saying I want to be an alligator and wait for prices to come to me.

But that record has moved my net worth more than a few times over the last 15 years.

I am a long term bull on copper. I think it’s a fantastic place to be if you have a 3 to 5 year time frame. But that doesn’t mean that the price of copper won’t experience near-term downward pressure.

On a side note…

After 12 years of being on the board of Canada’s third-largest copper producer, I have decided to retire from the board.

It was an incredible journey which provided firsthand experience in putting an asset into production. I am a big fan of CEO Gil Clausen and his team. Gil was surprised by my decision to retire from the board, considering I am only 40.

I was the longest serving independent director on the board. I have been a very loyal director and investor in the deal, and it was time for me to step down. I have no doubt Gil and the team at Copper Mountain will increase shareholder value over the coming years.

My full focus is on making big bets in the echo phase of the resource market.

The echo phase is the period of time where prices are flat- lining and only the best stories can make you multiples on your investment.

Most investors have the attention span of a goldfish.

But I have built my entire career and net worth off of being patient.

Everyone in my office, myself included, makes the majority of our money from investing, not this newsletter.

We are in a marathon, not a sprint.

Our strategy has proven to work.

Right now, there are a handful of companies I would love to own. But I am practicing discipline and waiting for lower share prices and flashing buy alerts for big entry points – as should you.

Right now, there are only two types of companies I want in my portfolio…

One major mistake I made in 2017 was selling Kirkland Lake (KL.T) too early.

Today it is by far the best performing North American-listed gold producer from a share price perspective, going from CAD$1.50 and CAD$7 – my first two recommendations – to CAD$45 per share today.  That is the one problem of being early to a great story.  You sell too early also.

Kirkland Lake Gold is a company that I am very familiar with, and I have owned it several times.

The first meeting the new management team (Newmarket Gold) taking over Crocodile Gold had in 2015 was with me in my office. After our due diligence, I bought just under 10 percent of the company. In fact, the first report published by Katusa Research when I opened up shop was on this company.

Newmarket Gold merged with Kirkland Lake Gold to become the CAD$9 billion powerhouse it is today.

While other companies have seen their share prices depreciate, Kirkland Lake shares have appreciated sharply.

I’ve said before that I believe Kirkland Lake should backfill their share price (yes, this is a polite way of saying their share price is expensive and they should use their expensive paper relative to the peer group) by taking out other producers or near-term producers.

But it’s not just Kirkland Lake that’s on the hunt to snipe their next buyout target.

Below, I detail my methodology for filtering and finding the next takeover targets.

My goal is to identify single producing projects that are:

There are over 600 producing gold mines in the world.

After running the criteria through my database, I came up with a list of 89 potential mines.

I then eliminated the following:

From the remaining list, qualitative digging was performed on each project.

By now you’re asking… does this actually work?

Atlantic Gold Gets Taken Out

In case you missed it, Atlantic Gold (AGB.V) was just purchased by the Australian gold producer, St Barbara Ltd for CAD$802 million.

I’ve spoken at length about how the outperforming Australian gold companies will be taking over underperforming assets and companies – and called it The Commonwealth Takeover.

I see this trend continuing so long as the Aussie companies continue making money hand over fist on $2,000 gold.

But back to Atlantic Gold…

I first put out my thoughts on Atlantic gold being a take-out target on May 19, 2017, just over two years ago. The stock was trading in the CAD$1.50 range.

And in the August 2018 issue of Katusa’s Resource Opportunities, I wrote:

Atlantic Gold is another gold producer that has recently achieved commercial production in a safe jurisdiction. The Canadian company will produce upwards of 80,000-100,000 ounces in 2018 and 2019 before ramping up to 200,000 ounces by 2022.

Atlantic’s gold mine is located in eastern Canada, in the province of Nova Scotia. While less documented than other areas of Canada, the eastern coast has been home to multiple historical producing base metal and precious metal mines.

Atlantic Gold has done an excellent job of hitting both its production and cost guidance. As I’ll explain below, the company has proved that this is not going to be a one-deposit company. This is becoming a district play with multiple deposits contributing to increased production and mine life. This type of scaling is what mid-tier gold producers are looking for.

The initial feasibility study in 2015 indicated production would average around 80,000 ounces per year for 9 years with cash costs of $480 per ounce. It’s a solid low-cost project. But that is too small to get me or a mid-tier gold producer excited enough to open a checkbook.

Today, the company is on track to produce between 82,000 and 90,000 ounces per year. Cash cost guidance for the year is expected to be between $400 and $450 per ounce. This makes Atlantic Gold one of the cheapest gold producers out there.

Based on the 2017 resource update, each satellite deposit hosts roughly 400,000 ounces of proven and probable reserves. At the time, the two deposits were open in multiple directions, making them ripe for additional drilling to increase the resource.

Since July 2017, the company has completed a drill program which focused on this expansion. Management expects to have a resource update out by the end of 2018. I could see the resource doubling in size without a lot of difficulties.

Below is the map for the Fifteen Mile Stream deposit. Fifteen Mile is one of the satellite deposits, which hosts 432,000 ounces of proven and probable gold. Outlined in orange is the current resource estimate, and all the dots indicate the expansion drilling. Drill results continue to show that mineralization extends well beyond the current resource estimate. This is why I think the deposit could easily double in size. 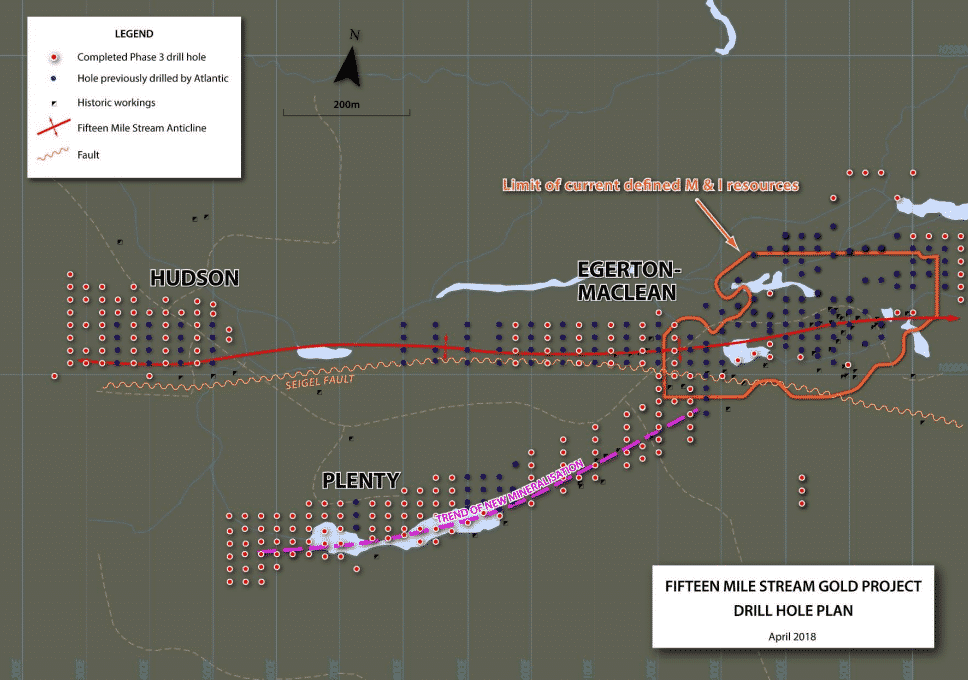 Is Atlantic Gold for sale? Yes.

Atlantic Gold has a lot of exploration upside. The company is now drilling 100,000 meters, focusing solely on exploration drilling, and I can see the multiple deposits cobbling together somewhere between 3-4 Million ounces of gold. The first target is 1 kilometer east of the Fifteen Mile Stream deposit. Initial drill results are encouraging and indicate a system like the Egerton-Maclean zone at Fifteen Mile Creek.

Atlantic Gold would fit well into any mid-tier miner that wants a low-risk asset which is capable of producing 200,000 ounces for 10 years. The recent exploration drill program has the potential to delineate another mineralized system, which would make the company even more valuable. This company would fit well into a mid-tier, like SSR Mining that needs another safe jurisdiction gold mine. At a CAD$400 million market capitalization, there’s a handful of companies that could take a run at Atlantic Gold.

And just like that another stock gets crossed off my gold buyout list… Which you could’ve accessed for free in our Market Intelligence Center.

To help narrow down your search and research, consider becoming a member to Katusa’s Resource Opportunities. With a membership, you’ll get immediate access to companies that I am personally investing millions of dollars into.

Gold buyout season is heating up. 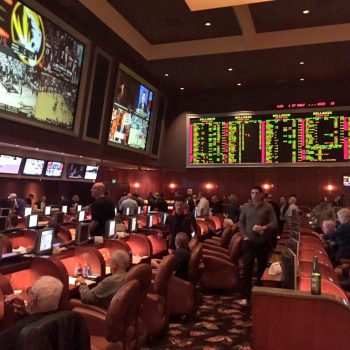 Rumor Has It – This Gold Company is Getting Bought Out