What if I were to tell you that gold is within earshot of all-time highs. You’d call me crazy. But I’m not.

Below is a chart which shows gold prices denominated in Canadian, Australian and U.S. dollars. 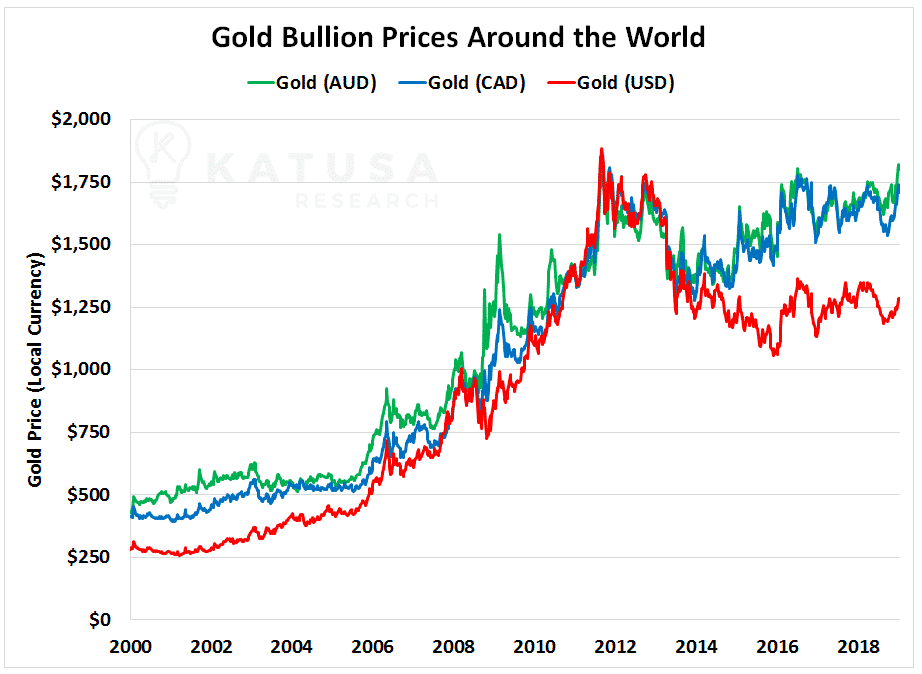 You’ll notice gold went on a tear in all currencies from 2000 to 2012. However, after that, gold priced in U.S. dollars has under-performed. Gold priced in Canadian and Australian dollars has been very strong and is within striking distance of all-time highs.

Below is a chart which shows gold performance in Canadian, Australian and U.S. dollars since 2012. 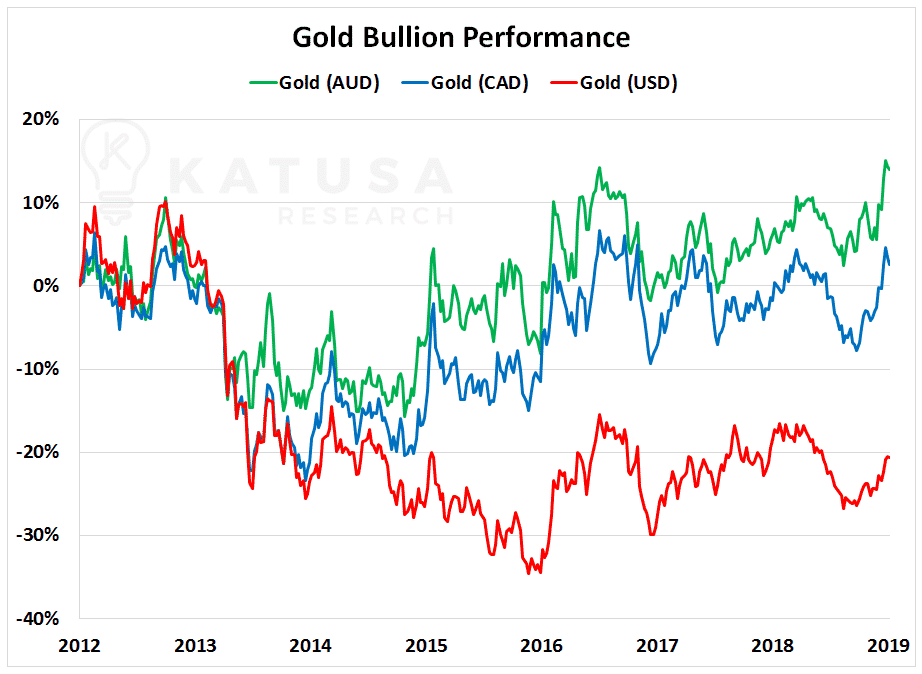 Lots of news outlets will lead you to believe there’s a race to the bottom in currencies. And while this may sound dire, it’s great for resource companies in the right jurisdiction.

Right now, there’s a small handful of companies that are making a killing and cashing in on “$2000 GOLD”.

Gold prices in Canada and Australia have risen faster than production costs. It creates a large windfall thanks to the currency depreciation.

Take a look at the chart below which shows the average free cash flow generated per ounce of production for Australian producers compared to North American senior producers.

Cash positions and valuations for Australian gold miners are the highest they’ve been in 5 years. It’s a far cry from the multi-year lows we are seeing in our North American gold markets.

And I’m not the only investor accumulating physical gold and gold shares.

This need for a safe haven… an escape from the dollar… and a hedge against the stock market is setting up gold for a massive run.

If the U.S. Fed continues to raise interest rates and pops the stock market bubble… investors are going to come fleeing into the one safe haven that’s stood guarding your wealth over the last 4,000 years: gold.

And if the system keeps chugging along…

Then the $7+ trillion that central banks around the globe have pumped into the markets over the last 6 years is almost certainly going to kick off a massive wave of inflation… sending gold prices soaring.

On top of that, emerging powers like China, India and Russia continue to be active buyers of gold bullion. 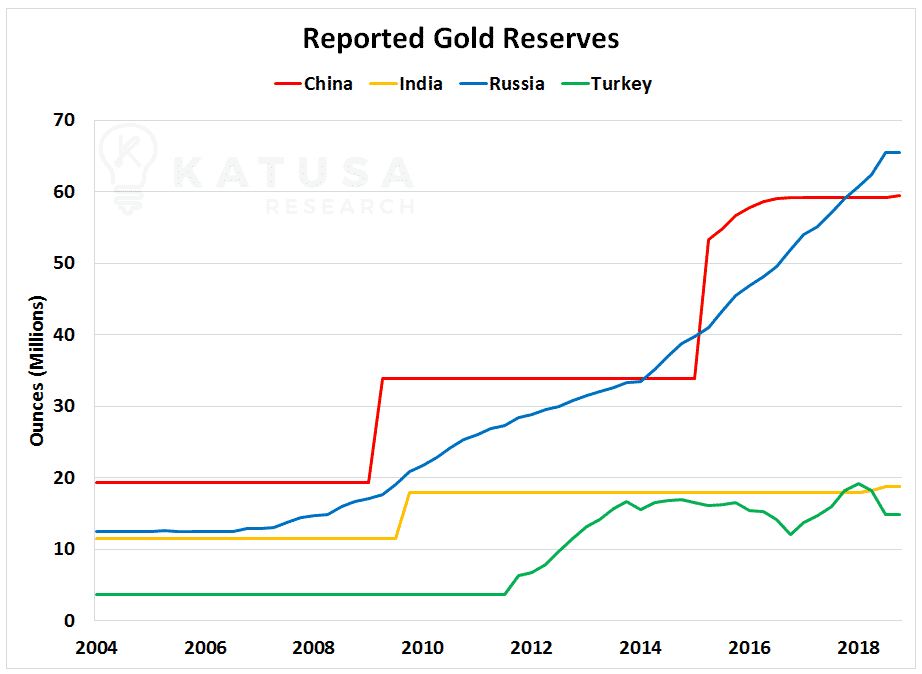 Not to mention the doomsday clock is closer than ever to midnight because of the growing instability of the Trump Presidency, the European Union and Middle East.

The way I see it, if there’s one investment that’s almost guaranteed to shoot to the moon over the next 10 years… it’s gold.

Gold Could Already Be on Its Way Up

Gold has actually been in a quiet rally for a while.

You’ll notice gold bull markets all follow a similar pattern where prices start a steady climb and then begin to rise faster and faster. Obviously, you want to get in as early as possible.

But most investors don’t understand when the switch from bear to bull actually happens.

If you don’t know what you’re doing, it’s easy for the start of a new rally to look like it’s still part of a downtrend.

One strategy to add to your arsenal is to use my Katusa Keys:

If you’re like most people (myself included), at some point you’ve partnered someone was unproven, dishonest, incompetent, or all three.

It’s easy to get caught up in a good story and invest without making sure you have solid partners.

But when you buy a stock, you become a business owner. That’s why you should treat your money with respect and only partner with proven winners.

Winners tend to keep on winning. 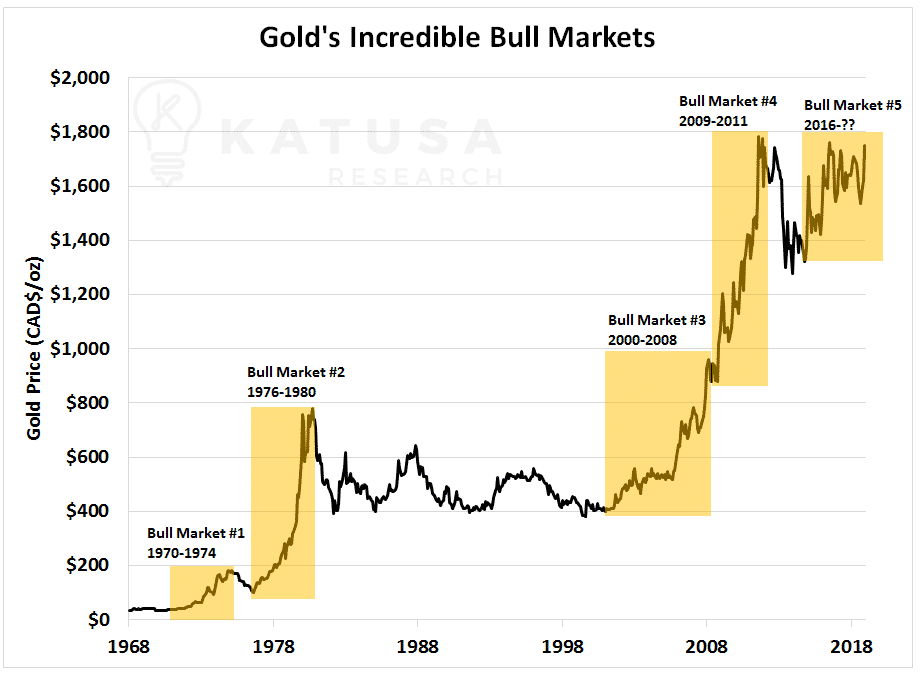 My strategy pinpoints companies that have large, high-quality, tier-one potential resources. You need to find projects that are attractive to large producers and funds.

…So that it can get bought out at large premiums.

You don’t want to overpay.

Yet, when it comes to investments, many people cast aside the idea of buying bargains.

They get excited about a company’s story and they just buy stock. They don’t pay any attention to the price they’re paying… or the value they’re getting for their investment dollars.

Even the best assets in the world need promotion by strong management teams.

If a company has great potential, the rest of the world needs to know about it.

If the world doesn’t know about it, there won’t be anybody around to buy shares and drive up the company’s value.

What is it about the company that will drive up the price?

Is it working on a big discovery?

Is it furthering the development of a high-quality asset?

These questions must be asked and answered before you make an investment. One or more catalysts must exist that will drive a company’s share price higher.

Katusa Key #6: The Numbers: Past, Present, and Future

It’s not just about the basics of a balance sheet you learn in a business class.

The key to picking a great stock is really understanding if a company can pull off their business plan.

You need to know things like head grades, recovery rates, off-site costs and hundreds of other bottom line items.

Normally, it takes investors months or years to dig through all the paperwork and find what they need.

We spent well over six figures having this technology developed by a team of brilliant programmers and analysts.

They brought several intelligence platforms and data vaults all together into one advanced computer engine that can analyze and compare thousands of investment variables.

The “Midas Code” can calculate any metric or value I need with a few clicks of the mouse.

If I wanted to find a gold company in Canada that has more than 2 million ounces of gold… a market cap of less than $1 billion… more than $10 million in cash… and less than $200 million in debt… this program will pull up every company that fits those criteria in seconds.

My six Katusa’s Keys along with the “Midas Code” is how I’ve succeeded in the gold and resource markets for almost two decades.

In the February edition of the newsletter, I am publishing my research on two producing Canadian gold stocks that I believe will be bought out in 2019 for exactly the reasons mentioned above.

And I intend on investing millions into both of this producers. Bet right, sit tight.

Do your portfolio a favor and find out why legends in the business like Doug Casey have me manage his resource portfolio at Katusa’s Resource Opportunities.

I hope you’ll consider joining me.