Gold has received a lot of fanfare this year, and for good reason.

The talking heads on Bloomberg, CNBC and other networks are even getting into the mix. Gold “gurus” are stepping over each other to deliver the next, great target price.

No one has made a John McAfee style, “Bitcoin is going to $100,000 or I’ll eat my genitals” prediction on gold yet. So there is an opportunity to get 15 minutes of fame for the right individual.

So, let’s do a realistic take on predictions…

My investments will be highly profitable at $1,500 and if a moon-shot price of $2,500 per ounce or higher gets hit, then they’ll be wildly so.

But that’s not what today’s missive is about.

Today’s missive is about something far more powerful. It’s a situation that is brewing in the background, going unnoticed by most.

China has been a significant buyer of gold since the year 2000. In 2000, Chinese gold reserves were 12.7 million ounces. Today, they are over 62 million. This is nearly a 5x increase in total holdings. 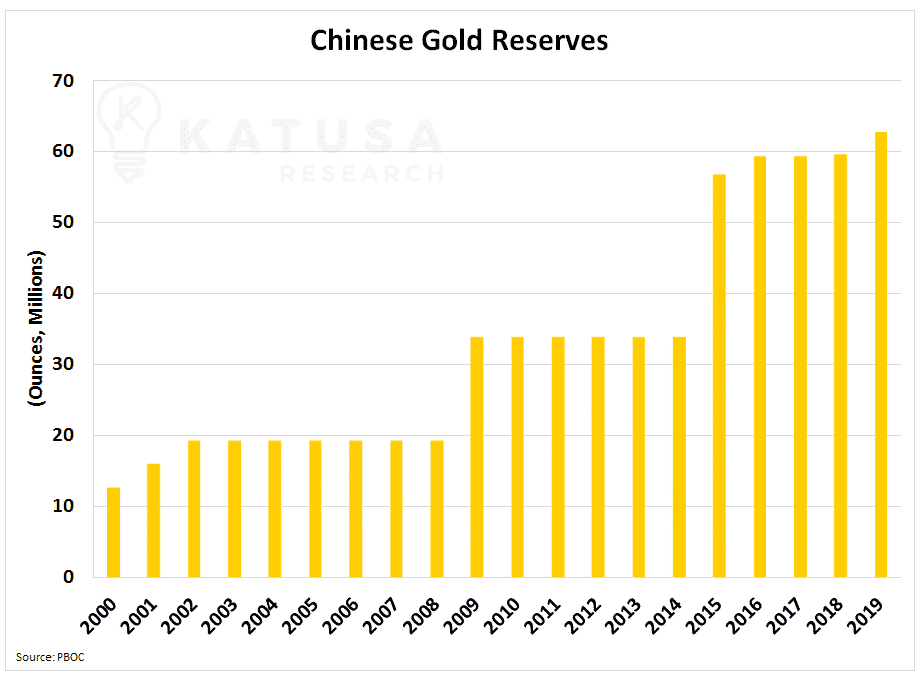 Looking at the chart above, Chinese gold buying has historically been lumpy. A large, rapid purchase followed by nothing for years at a time.

Today, it’s a different story. History is not repeating itself, take a look… 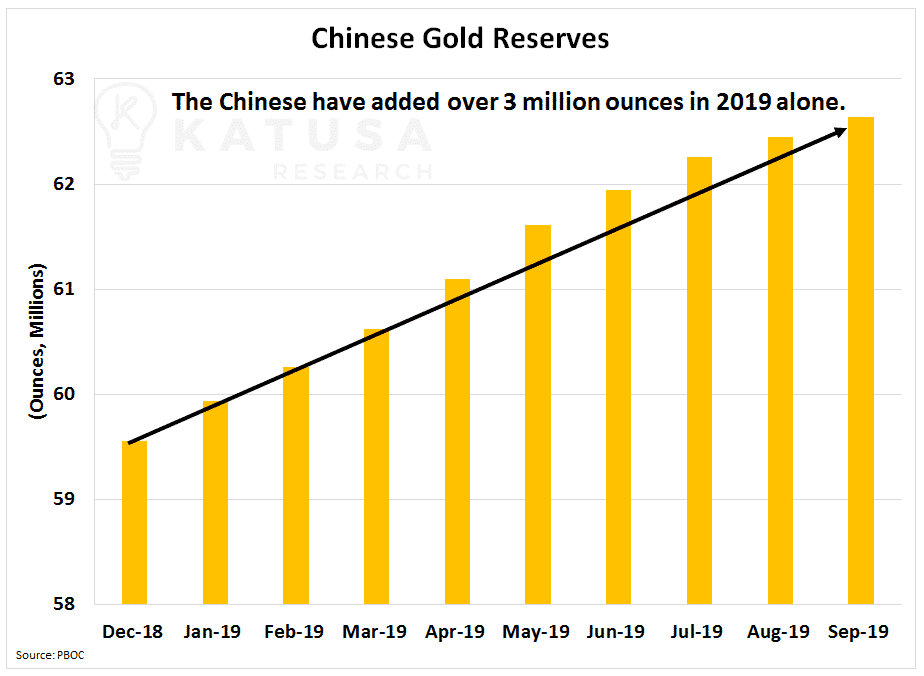 The Chinese have purchased over 3 million ounces so far this year, this represents just under 3% of global gold production.

One of gold’s allures is that it’s a store of value. It’s always been a solid hedge in times of recession and against inflation. 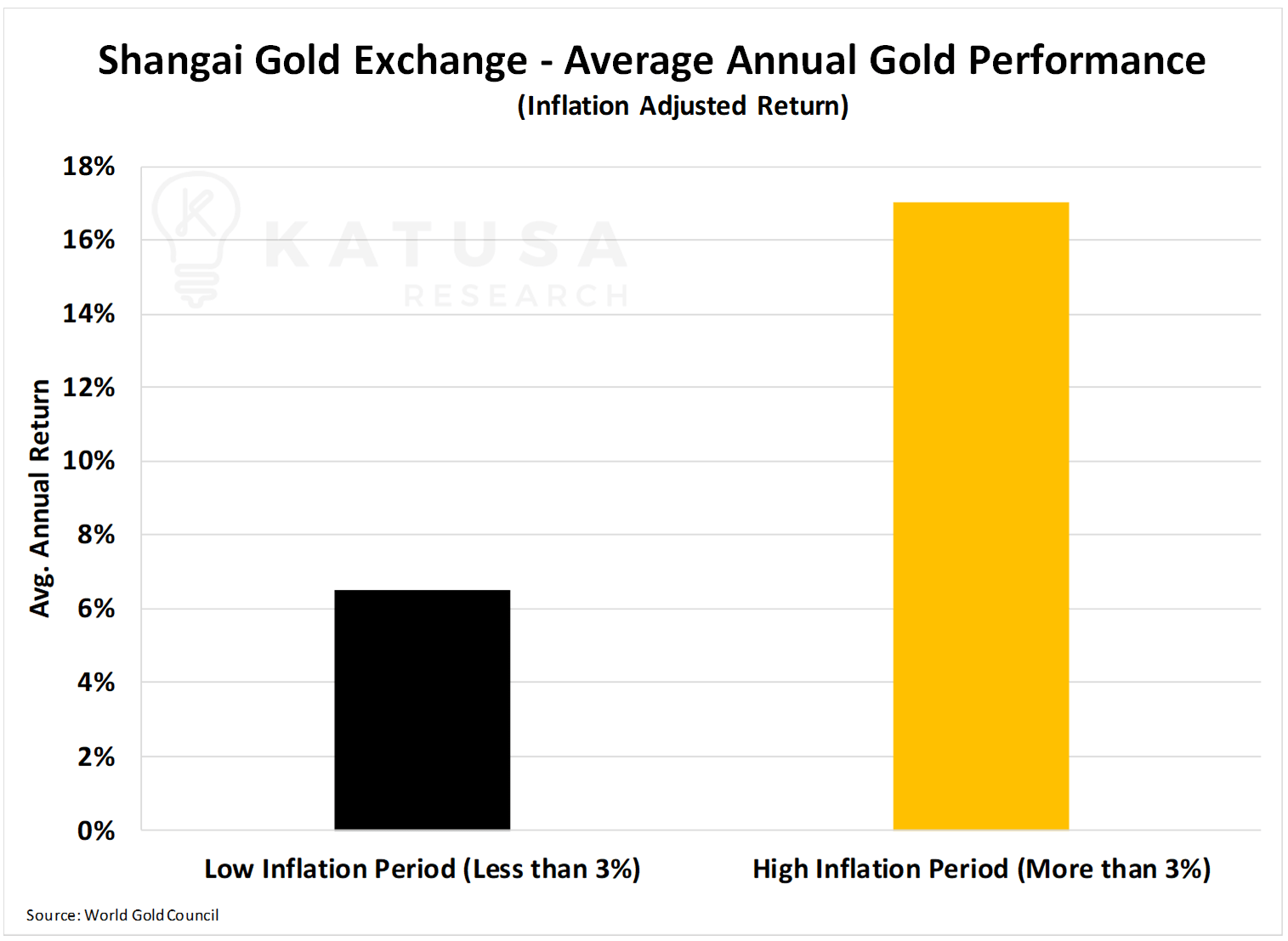 Inflation has been rising in China. Fueling the fire has been a lowering of the Chinese Central Bank’s reserve requirements. This will spur additional lending and increase the money supply.

Remember how I said gold was a store of value? This is a real-life experiment where you would want to protect your assets from currency devaluation.

We all know where Donald Trump stands on China’s currency situation.

What About Chinese Paper Gold?

In North America, you can buy an Exchange-Traded-Fund (ETF) that is backed by gold. The largest of which is the ‘GLD’ ETF, which has assets under management of over $40 billion.

At a gold price of $1,500 per ounce this works out to 26.7 million ounces of “paper gold” exposure. If you add up the holdings of all the major gold ETFs – the “ounces under management” is 81.7 million ounces.

Now, there are only 3 publicly traded gold funds in China.

The combined holdings of the ETFs is a paltry $2 billion. 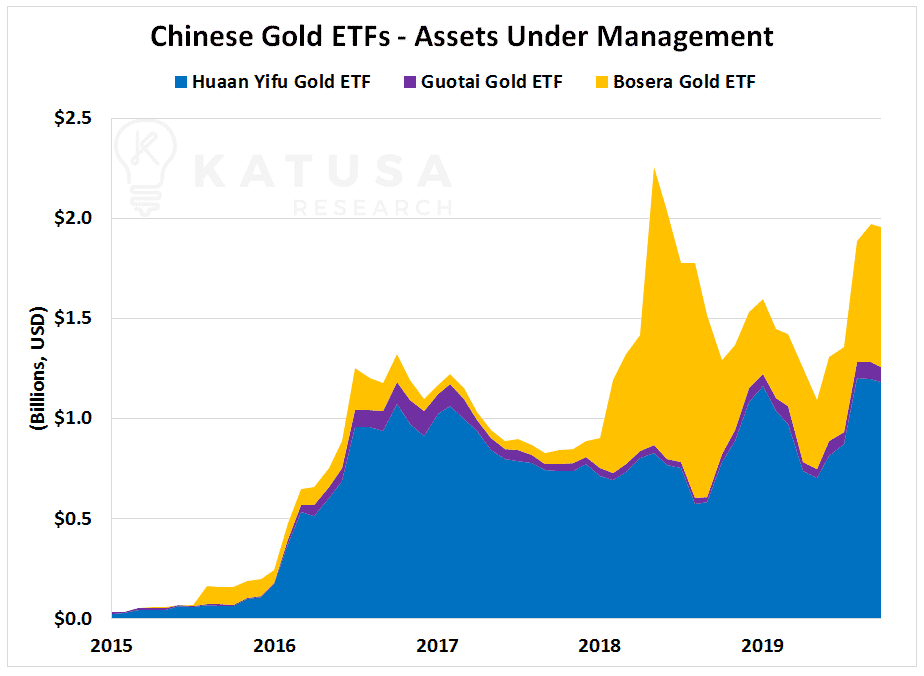 It’s safe to say, that the “paper” gold market is just getting started in China. Will it ever be as big as the North American paper gold market, maybe not. But it’s certainly going to grow, and faster than everyone thinks.

Here’s something you probably didn’t know…

Chinese Gold Companies Have Been on a Tear

Again, like the gold ETFs there aren’t that many yet, only 12 right now that are precious metals focused.

However, the returns of those companies has blown the developed world’s gold company’s out of the water.

Below is a custom built Katusa Chinese Gold Miner Index. For ease of comparison I have included the returns of the largest U.S. listed Gold Miner ETF, the ‘GDX’. 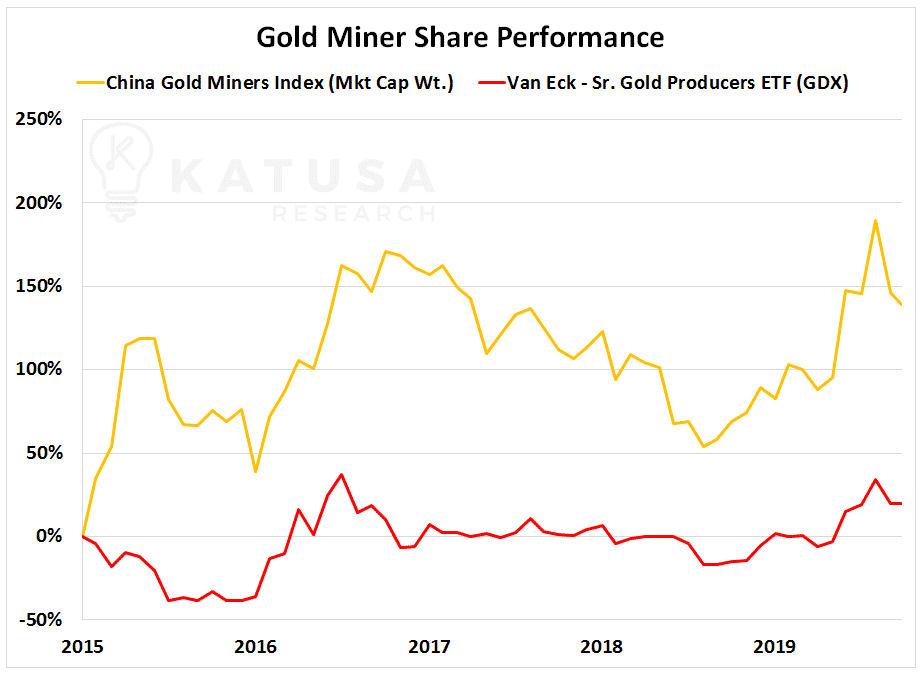 We have all heard stories about massive speculation that drives wild pricing in the Chinese markets.

If you were a speculator, wouldn’t you want to hedge some risk with gold? Knowing your country has been a continuous buyer?

To me, it makes a lot of sense that these speculators eventually trickle into the paper gold to hedge their risk… and then into the producer market for further speculative upside.

Closer to home, the Katusa’s Resource Opportunities gold portfolio has also been on a tear. We have had multiple holdings increase by 100% or more this year. We are even giving the Chinese Gold Miners Index a run for its money.

My team and I will be in San Francisco this weekend, co-hosting the Silver & Gold Summit. If you are in the area, do yourself and your portfolio a favor and come check out the show.