HomeResearchCannabisMarijuana Meltdown: The Next Chapter for Cannabis Investors
1535 seen

Marijuana Meltdown: The Next Chapter for Cannabis Investors 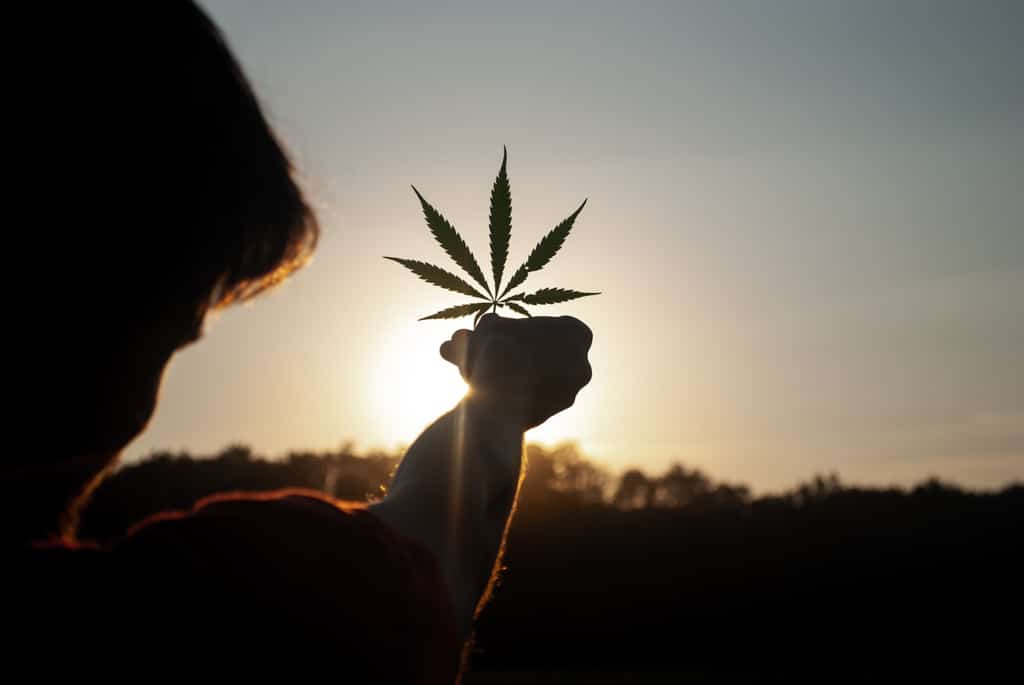 Since the Tulip Bubble, analysts and the media have focused on the cycle of Boom and Bust.

They love catchphrases: the bull and the bear, the long and the short.

A stock rises on the back of strong company results or a new sure-fire sector, and plummets when things turn sour.

Or investors simply tire of a stock. They come to see it as overbought and a selloff hammers the stock lower.

During a Boom, there is a general sense of euphoria, a feeling that the market will continue notching new highs forever. Everyone is an expert, and every stock in the sector gets priced to perfection.

Naturally, that’s a recipe for disaster.

Inevitably, a Bust shows its ugly head. Doom & Gloom set in. Investors begin to fret that it’s never going to turn around.

But, they’re just as wrong. However, patience is required.

There’s more to a cycle than just Boom and Bust, bull and bear.

This sideways market is an integral part of the process, with unique and definable features.

Understanding how the three cycles work can make the difference between succeeding in the markets and failing like most others do.

In the past, I’ve tried to explain this concept to others in the investment business.

I got the distinct feeling that my words were just bouncing off and returning to me, like an echo. That’s how I first got the idea and how Boom, Bust & EchoTM was named.

The Marijuana Meltdown – The Lesson of the Falling Safe

Before the Echo Phase, markets experience a bust. That’s when inflated share prices crater and enter freefall. These are often called “falling knives” or “falling safes.”

Just like in real life, trying to catch them can be extremely dangerous.

My buddy Rick Rule always says, “Those who try to pick bottoms usually have nothing to show for it but stinky fingers.” But that doesn’t stop many people from trying.

Many people see a decline and think, “It’s due for a big rebound… so I’m buying.”

Dead cat bounces do happen. But be careful of them. The very high levels of emotion create markets that wildly move up and down with very little concern for fundamentals. During these times, it doesn’t matter if an asset is overvalued or undervalued.

Trying to catch a falling safe at this time can be very risky.

There’s a much lower-risk way to play markets in crisis. Knowing how to do it will give you a huge edge over others. In the lucrative Echo Phase of a market you can just apply the following strategy:

You may not buy the exact bottom, but it sure beats being underwater in the position.

Gold and silver bugs – heck, even oil bugs are no stranger to cycles.

But in a virgin market like cannabis, a whole new generation of investors were sucked into a glorious bull market. And now they’re getting sucked into the hype trying to catch a falling safe.

Many investors continue to believe management teams that say their story is different. Some truly may be, but only time – and revenue numbers – will tell.

It’s easy to spot the time when a market has peaked. Like when one of our employees got a “hot cannabis stock tip” from his barber down the street back in the summer of 2019.

Around that same time, another Katusa Research employee was at a concert where the musician on stage actually told the crowd to go out and buy a certain cannabis company. If those aren’t the signs of everyone being an expert, I don’t know what is.

I just shake my head and see history rhyming.

So let’s take a look at what’s happening…

Pot Stock Volume is Down…

Many of the major companies are rolling over…

Below is a chart which shows an index of marijuana companies from 2017 to today. You’ll see at one point the index was up nearly 1,500%. 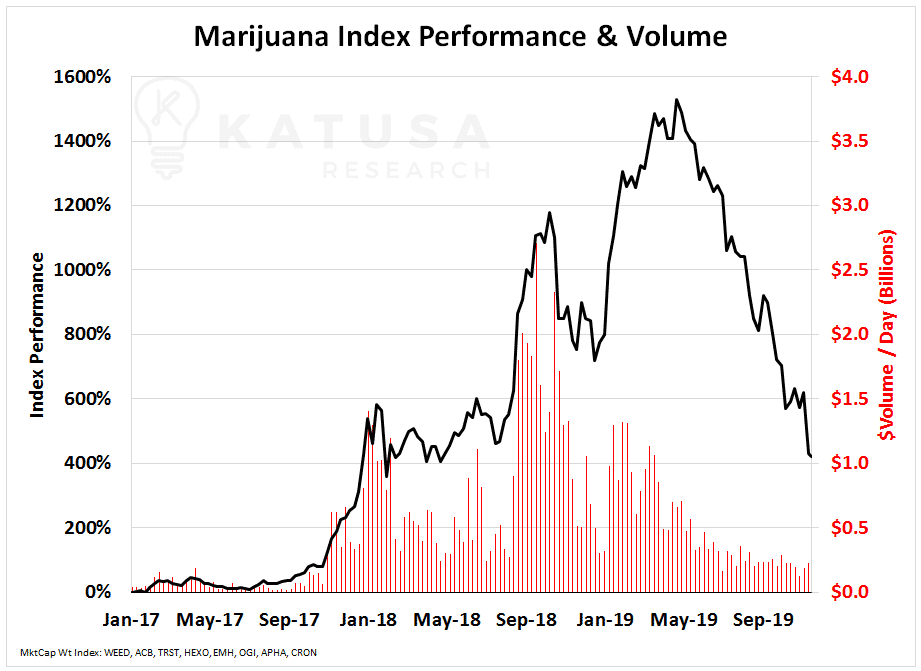 You can see from the chart that the marijuana company index surged in late 2017 through to early 2018. The volume of shares traded in the marijuana sector was nothing short of breathtaking. The sector was trading billions of dollars’ worth of stock every day.

What you’re seeing and maybe even experiencing firsthand is capital fleeing the sector… fast.

A tsunami of capital flowed into the cannabis sectors from 2017 to early 2019. After the first prelude to a crash in 2018 (followed by a V-recovery)… the bust is happening in earnest.

Cannabis investors have now seen that a rising tide lifts all boats and subsequently when the tide goes out…they’re all washed out to sea.

The big realization that’s happening right now in the marijuana sector is the concept of being priced to perfection.

Up until recently, companies were trading as if their facilities were fully constructed, revenues were at expectations and costs were on budget.

Few – if any – facilities came online on time and on budget, hitting pro forma revenues and costs out of the gate.

And if you’re not making money, investors will punish you.

After the tide recedes (and it always does)… capital leaves. At that point only the strong companies will stay afloat.

Funding has all but evaporated in the cannabis sector. Bonds are coming due or the terms are changing. And financings that filled up in minutes are getting filed back into the drawer.

There is no more capital being allocated to the fly-by-nighters.

Financing Activity is Drying Up

Below is a chart which shows the Life Sciences financing data from the Toronto Stock Exchange. It’s not a perfect data set, but it’s a reasonable bellwether for the sector. You’ll see that financings peaked at $9 billion last year. So far year to date, financings are touching $4 billion, a 55% decrease from 2018. 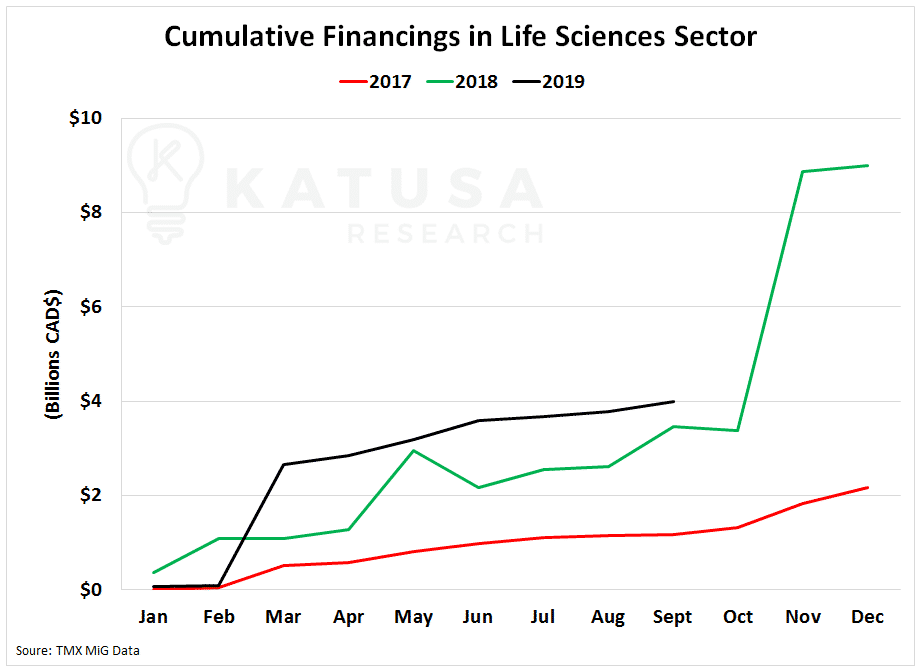 I’ll go out on a limb and say that financings next year will be even lower than 2019.

Many Junior Cannabis Companies Are Being Hit Hard…

In the chart below, you’ll see an index of small-cap marijuana stocks that have been absolutely decimated. Remember the majority of volume came from Jan 2018 to Jan 2019 pushing prices to mania levels (things are different this time!). They’ve since crashed 70% from their peak… 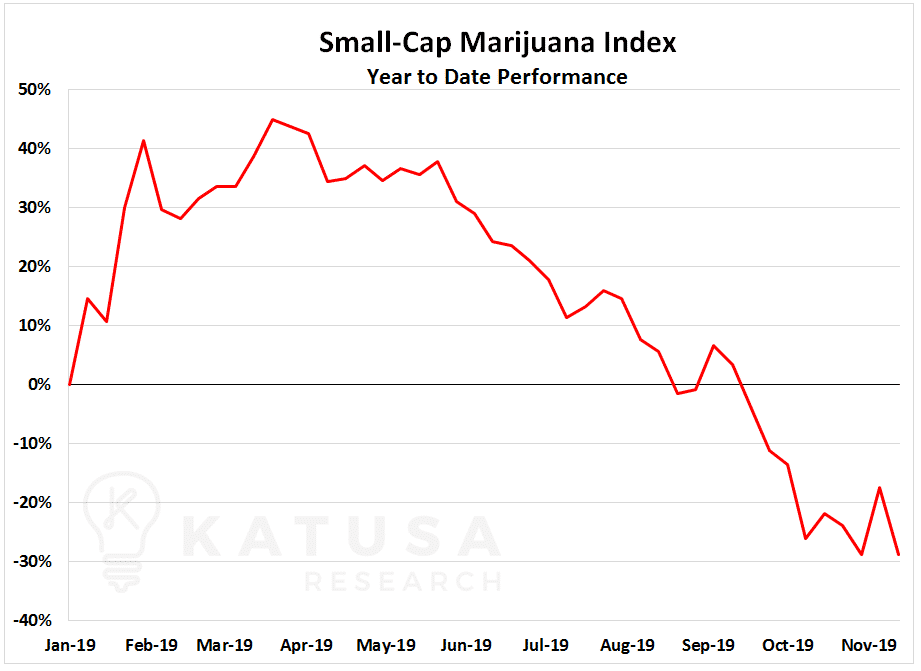 Tax loss selling in the cannabis space has and will continue to play a significant role in the market for the rest of the year.

Many investors are down 50% or more on their investments and it’s time to throw in the towel and take a tax loss.

The Echo Phase: The Next Chapter

These marijuana companies were more than priced to perfection. And now it’s time to separate the sheep from the goats. And there are A LOT of goats.

Gone are the days of easy money where a no-name company could switch its name to “Jim’s Cannabis Co.” and raise $25 million in 24 hours for a cannabis facility in Argentina, where, by the way, ‘dreams go to die’.

And those funds that invested heavily into cannabis are underwater. By quite a bit.

Now that those major funds are experiencing fund redemptions – you don’t want to be left holding the bag with shares of companies that don’t have revenue or any future.

Capital is fleeing and looking to find another home.

And we have our eye on select companies in a rapidly growing sector that’s in the early innings of a coming bull market. 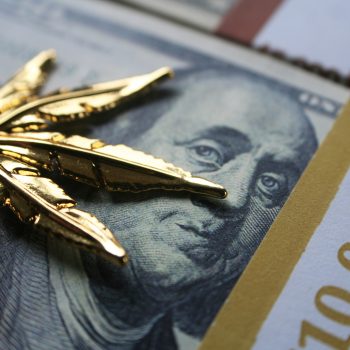