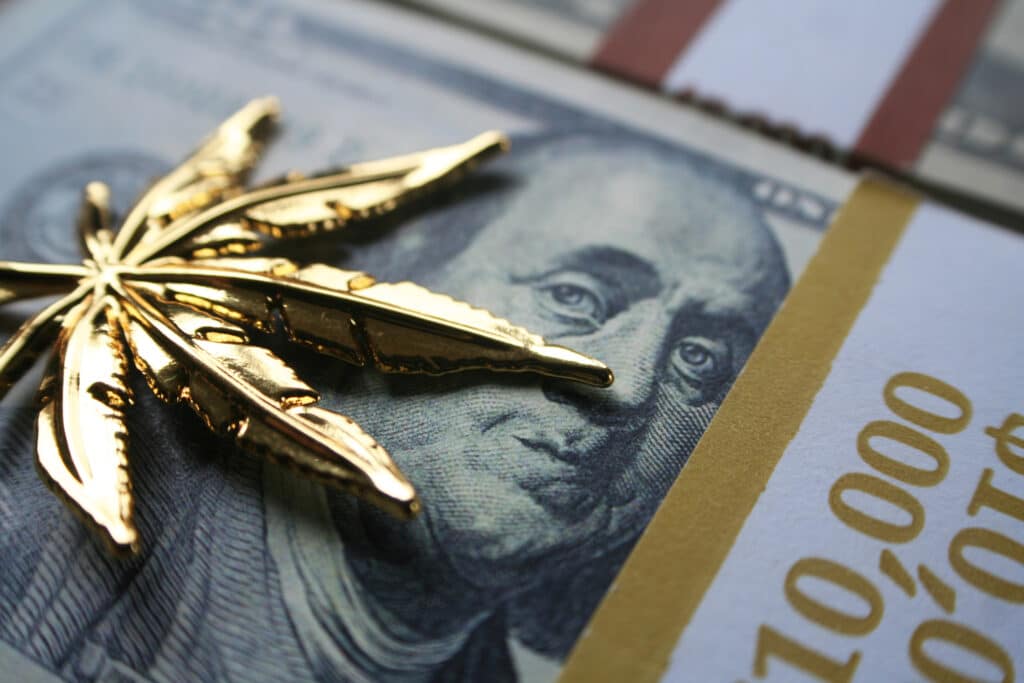 If you’re a cannabis investor then June 19, 2018 was probably one of the best days of your lifetime.

It was on this day that Prime Minister Justin Trudeau announced the legalization of marijuana across all of Canada.

After passing with a 52-29 vote, Canadian government officials agreed that October 17th would be the date that legalization would take place. This four-month time span produced extraordinary gains for investors.

Everyone is bidding for a piece of the pie to see if cannabis stocks will become the next big thing.

I’ve seen so many next big things, I’m immune. Or maybe I’m just getting on in years.

What is the Current State of Cannabis Legalization?

A larger look at North America as a whole indicates that Canada’s role in the legal cannabis industry is a huge one. Few states in the U.S. have made this move to date in comparison.

All green areas in the image below depict legal or decriminalized cannabis use. By volume alone, it’s clear that legalization in Canada could shape the market for the entire continent. 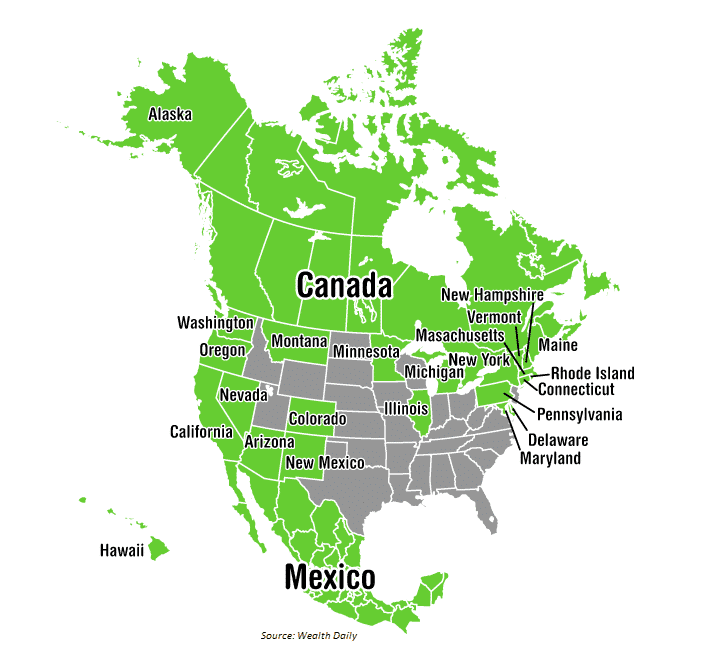 But you and I need to know if this major change is too good to be true.

Will cannabis stocks provide a windfall for those who saw this coming? Or are the gains largely baked into the cake?

Let’s explore some of the things to keep in mind as October 17th approaches.

Both investors and companies alike are turning their attention to unique areas of opportunity within the cannabis industry.

Large deals seem to be happening on a regular basis. There are individuals who want to diversify their portfolios. And there are major corporations looking to almost monopolize certain parts of the industry. Things are changing fast.

The cannabis sector is going through a wild transformation right now. Companies are vying for market share in legal markets that are opening up around the world. Companies like Canopy Growth and Aurora Cannabis are hell-bent on capturing market share. This is a trend that’s expected to continue.

Data and trends suggest that before long (even as soon as the year 2020) only four growers will be responsible for over 60% of Canada’s cannabis demand.

Are these the stocks to put your dollars in before they get too big to afford? Or is it the underdogs and IPOs that should be getting more attention?

According to Stats Canada, nearly 1.3 million people consumed cannabis at least once a week in 2017. Total expenditures were over CAD$5.5 billion last year. Below is a chart which shows cannabis consumption in Canada. 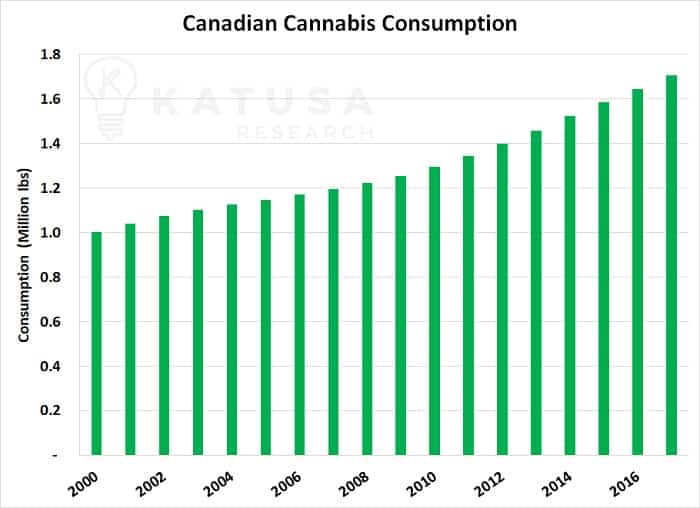 The 740 million person European market is the next region to be taken by storm. Many cannabis players are already setting up shop across the pond.

Cannabis is still illegal in many European countries. But, it’s estimated that over 10% of Europeans consume cannabis on a recreational or medical basis.

Let’s say that’s an exaggeration and it’s really 3% of the population which consumes cannabis. This works out to 25 million people.

Now let’s assume Europeans consume the same amount as Canadians. This works out to about $4,300 on an annual basis, per consumer.

This back of the napkin math indicates a potential market size of over $100 billion. That said, it’s going to take years for countries to get on board.

Germany is the most advanced when it comes to medical and cannabis regulation. We’ll likely see companies use the German regulations as a template for approval in other countries as the sector matures.

Below is a map which shows the likely path towards recreational cannabis in countries across Europe. 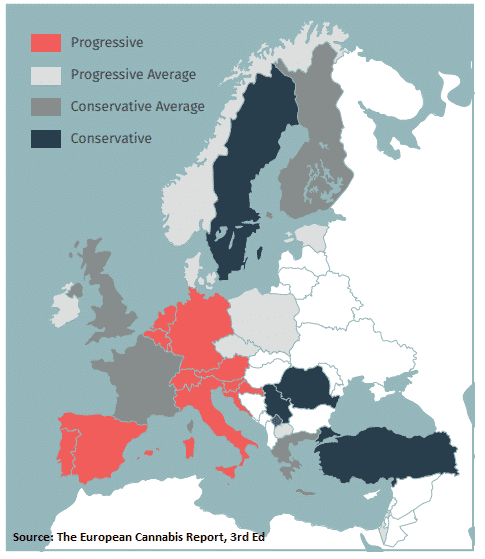 Most investors thinking about cannabis investments tend to stick to traditional opportunities like growing and dispensaries. However other budding niches are rapidly emerging.

The infused beverage market is a clear opportunity. Alcohol, sports recovery drinks, and cosmetics with CBD infusion are poised to enter the market.

However, the biggest potential market is the pharmaceutical market.

Sleep aids and anti-opioids are areas which could see cannabis breakthroughs. It makes sense in this context when we explore some of the larger deals that have hit the market as of late. Like CanniMed, a biopharmaceutical leader, which was acquired in early 2018 for CAD$1.1 billion.

Emerging sectors of technology could bring promising aspects to the industry as a whole.

Everything from lab testing equipment to growing procedures to roadside testing for police officers could be enhanced. This is akin to someone selling picks and shovels, or in the case of Levi Strauss – jeans to miners.

The medical side of cannabis has also shown immense promise in the last few years. And with new funding, even insurers may add cannabis to medical drug plans.

Options that are more user-friendly and that help bridge the gap for new adopters could also find themselves in a favorable position. Case in point, edibles and infused beverages have been shown to find more and more marketplace acceptance. Companies that can pivot into this niche could boom after October 17th.

The Ugly Side of Cannabis Company Valuation

So much of the movement in the cannabis stock market is happening at a rapid pace. And investors who are relatively new to the game may not be looking at all of the variables.

After hype, hope, and momentum die down, valuation is key. I’ve seen this countless times on the TSX and TSX-Venture where the most famous cannabis companies are listed.

The gold sector’s top 5 producers have a combined market capitalization of $50 billion.

This means that the top 5 producers make up 39% of the market.

Using the same math, the top 5 companies in the oil sector make up 48% of the global market.

The top 5 cannabis producers have a combined market capitalization of $34 billion. The Canadian market place is only $4.2 billion, which is 8 times the size of the market.

California is worth $3.7 billion, and Colorado is worth around $1.65 billion. According to a major Canadian bank the total US cannabis market both legal and illegal is $50 billion.

So, by this metric Canada plus the United States is $55 billion. Using this combined market, the top 5 cannabis producers make up less than 100% of the potential market.

So is the market as overvalued as you think? It is in the short term for sure. It’s going to take years for countries to get on board.

That’s why you need to know the ins and outs of your cannabis investment. GMP certification (Good Manufacturing Practices), export licenses, extract licenses, access to strains. These are just a handful of questions you need to be asking cannabis management teams.

Not to mention asking if companies are fully funded for multiple buildout stages. Or if they are going to need to go back to the capital markets for cash.

Many investors might be hazy and in dream world if they think 100x multiples of cash flow will last as stock price valuations. Anyone remember the crypto, silver, or uranium bubbles within the last decade?

Another element to consider is the government’s ability to roll out major changes to the law.

Justin Trudeau’s announcement included a time frame of roughly 8 to 12 weeks to implement adjustments across the nation. It was supposed to be complete by mid-September.

We’re now looking at the middle of October before legalization is actually here. But who’s to say if there will be any red tape in the way.

The longer the market has to wait, the more instability there could be.

If there is any change to the October 17th date, a sharp correction in cannabis stock prices could follow.

The stock market, and particularly investments in the cannabis industry, are still volatile. For a sector that’s still so young to see so many 9 and 10 figure deals has some investors excited and others frightened. And retail is now involved in a large way.

So be diligent and do your homework before you make a bold move at today’s prices.

There are still excellent companies that can make headway in these markets with 5x and 10x potential. But also plenty of others with obscene levels of froth.

There are plenty of upside opportunities in companies that are on the cusp of key catalysts if you know where to look. 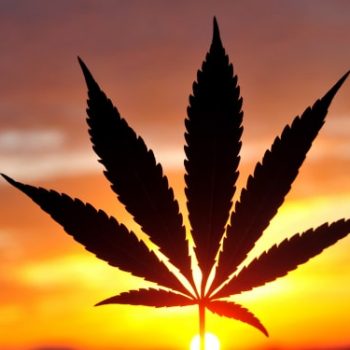 Marijuana Meltdown: The Next Chapter for Cannabis Investors