HomeResearchPrepare to Profit Series: Why I’m About to Make One of the Biggest Bets of My Career

Prepare to Profit Series: Why I’m About to Make One of the Biggest Bets of My Career

Publisher’s note: Last month, we mentioned the uranium market is sizing up to be a huge investment opportunity soon. That’s why it’s critical to know how the uranium market works… and why it could make you a lot of money over the next few years. Below, you’ll find our first installment in our “prepare to profit” series on uranium…

There’s an old saying in the news business, “If it bleeds, it leads.”

“If it bleeds, it leads” is a rule the media uses to decide what goes on the front page of newspapers and what kicks off the evening news. People are hardwired pay attention to reports of shootings, natural disasters, wars, and anything else that causes bloodshed. It’s rubbernecking from the comfort of your own home.

Ask any newsman and he’ll tell you: The average Joe is 10 times more likely to watch a story about 10-car pile up than he is to watch one about a medical breakthrough. The news business is like any other business. It must cater to its customers. So, the average Joe gets what he wants… and if it bleeds, it leads.

No recent event demonstrates this better than what followed Friday, March 11, 2011, when one of the biggest earthquakes in recorded history struck the east coast of Japan. The monster quake and the resulting tsunami killed more than 15,000 people and caused over $200 billion in damage.

In the weeks that followed, events at Japan’s Fukushima I Nuclear Power Plant dominated global headlines. The earthquake and tsunami caused structural damage to the power plant, which knocked out vital cooling systems. This caused reactor meltdowns and released radioactivity into the air. The name “Fukushima” is now etched in history alongside Chernobyl and Three Mile Island.

What went virtually unreported in the media is this: Fukushima I was not the closest nuclear power plant to the earthquake’s epicenter. That distinction belongs to the Onagawa Nuclear Power Plant. Onagawa was 60 kilometers closer to the epicenter than Fukushima.

Although the nearby town of Onagawa was largely destroyed by the tsunami, all three of the plant’s nuclear reactors withstood it without incident.

The Onagawa plant’s 46-foot tall seawall was large enough and strong enough to prevent extensive flooding. The construction of the Onagawa plant was solid enough to endure high levels of ground shaking. The facility’s staff was trained to handle problems.

Instead of evacuating the area like people did at Fukushima I, Onagawa locals sought refuge at the nuclear power station. It was the safest place around.

You probably didn’t hear this story on the news. It wasn’t sensational. But the fact remains that in 2011, a well-built nuclear power plant took a direct hit from one of the largest earthquakes in recorded history, without incident.

Yet, in the years that followed Fukushima, nuclear energy fell out of favor. News of the biggest nuclear disaster since Chernobyl sparked protests around the world. Japan shut down its nuclear reactors, which accounted for about 12% of global reactors. Germany vowed to phase out its nuclear power industry by 2022. Italy halted future nuclear power plans.

Before the earthquake, uranium traded for over $70 per pound. After the quake, Japan dumped its substantial above ground uranium supplies onto the market. This dumping, paired with reduced demand, sent uranium into a bear market that has taken prices down 69% to their current level of $21.63 . 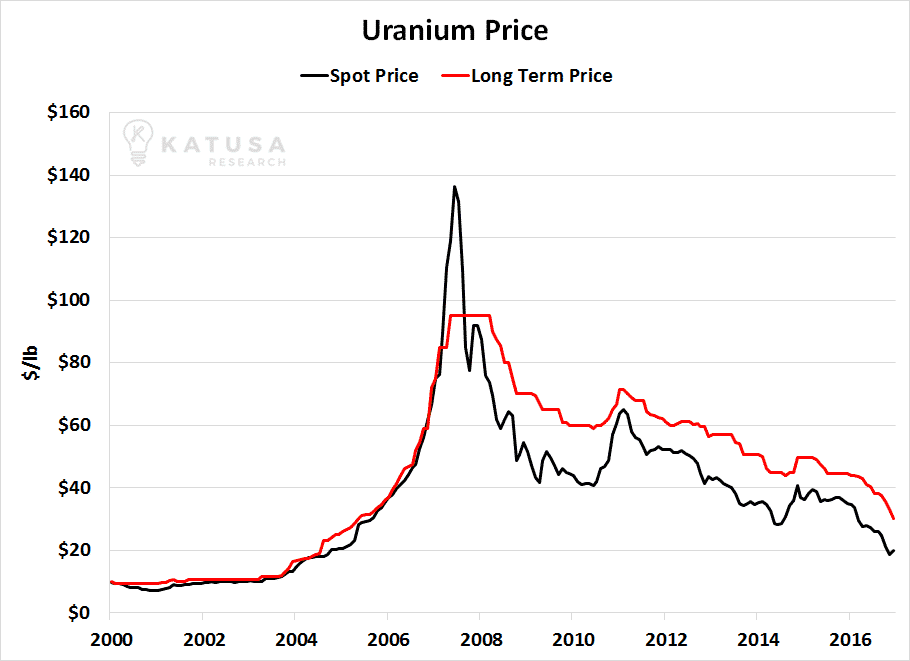 The $20 per pound range– is a crisis price for the uranium industry. Anything under $30 per pound will prevent any new mines from being built.

Statements like this scare most investors away from a market. But bargain hunting contrarian investors know these statements often mark the point of maximum pessimism… and signal major investment opportunities. Investment legends like Warren Buffett and Sir John Templeton built their fortunes and reputations on buying assets when it seems like “things can’t get any worse.” After all, when things can’t get any worse, they can only get better.

Risk is directly correlated for the price you pay for an asset.

I believe we are at such a point in the uranium sector. Taking a position in high-quality uranium stocks right now stands a very good chance of working out well for investors. In fact, a good case can be made that higher uranium prices are not a matter of “if,” but a matter of “when.”

That’s why I’m making this sector one of the biggest bets of my career.

The average citizen’s knowledge of nuclear power comes from disaster movies or soundbites about accidents like Japan and Chernobyl. It’s easy to paint nuclear energy as the boogeyman.

The reality is that nuclear energy has provided – and continues to provide – the world with stupendous amounts of clean, safe, emission-free electric power. Coal, which is also used to generate electricity, has killed far, far more people than uranium.

The average citizen also doesn’t know nuclear power’s vital role in the American economy. America gets 19.5% of its electricity from nuclear power. It powers about 23 million homes, or about twice the amount of homes in California. Without nuclear power, the lights would go off for many Americans.

Below is the breakdown of the major types of energy produced in the United States. You can see that nuclear is one of the top three. 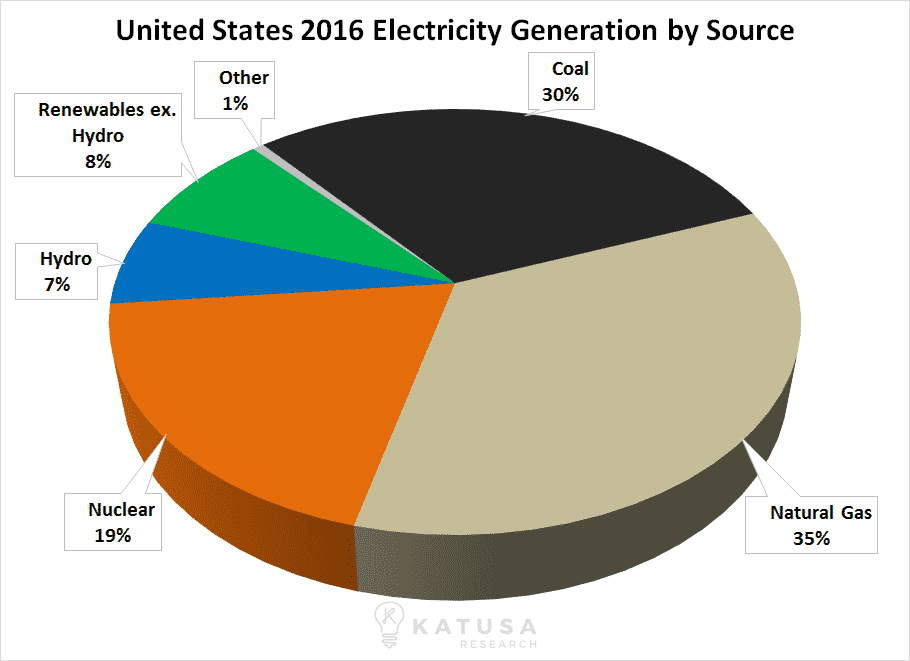 Nuclear energy is responsible for about 10% of global electricity production. If the world wants to cut carbon emissions and keep the lights on, nuclear energy’s share of production has to grow.

Nuclear energy provides “base load” power. Base load power is consistent, dependable power. It’s always there and always on. It is the foundation of a healthy electric power grid. Base load power is in contrast to power derived from solar and wind, which can fail to produce power during the night (in the case of solar) and during periods of calm (in the case of wind).

There are over a dozen radioactive elements, but uranium is far and away the best fuel for nuclear reactors. It offers the best combination of supply, ease of use, and ease of disposal.

Naturally-occurring uranium is not concentrated enough to be useful in today’s nuclear power plants and weapons. It must be “enriched,” which can happen through various processes. The most common enrichment process is with “centrifuges,” a term you’ve probably heard a TV talking head mention when talking about Iran’s nuclear program.

The energy content of uranium is approximately 3 million times greater than that of fossil fuels. To put it in perspective, realize that one tenth of an ounce of uranium contains the equivalent energy of 6,613,868 pounds of coal. If you’re a country with little fossil fuel resources like South Korea or Japan and you want safe, secure energy to keep your economy running, nothing beats uranium.

P.S. I don’t want to overwhelm you with information in one day… so please keep an eye out for Part 2 of our “Prepare to Profit” series on uranium. I believe it will be some of the most valuable information you read this year.

Prepare to Profit Series Part 2: A Clear Path to Much Greater Uranium Demand

A Huge Investment Opportunity is Setting Up in 2017