The Hottest Metal in the World Right Now – Vanadium

One of the trendiest metals on the tip of investors’ tongues right now is vanadium.

The metal is named after Vanadis, a Norse goddess. Vanadium is very ductile, malleable and corrosion-resistant.

It’s rare for vanadium to exist as a free element and it’s usually found in minerals such as vanadinite, carnotite and magnetite. Thus, metallurgy is the key question when you find a large amount of vanadium.

Vanadium has incredible properties which increase the strength of alloys containing it, such as rebar which is heavily used in construction. China has just raised their steel rebar limits (raised the bar—no pun intended). Vanadium is also used in everything from jet engines to dental implants.

This past weekend I was down at the Katusa/Cambridge House Gold and Silver Summit in San Francisco. The main theme was precious metals, but I couldn’t escape questions about vanadium.

Below is a chart which shows the price of vanadium over the past 3 years. 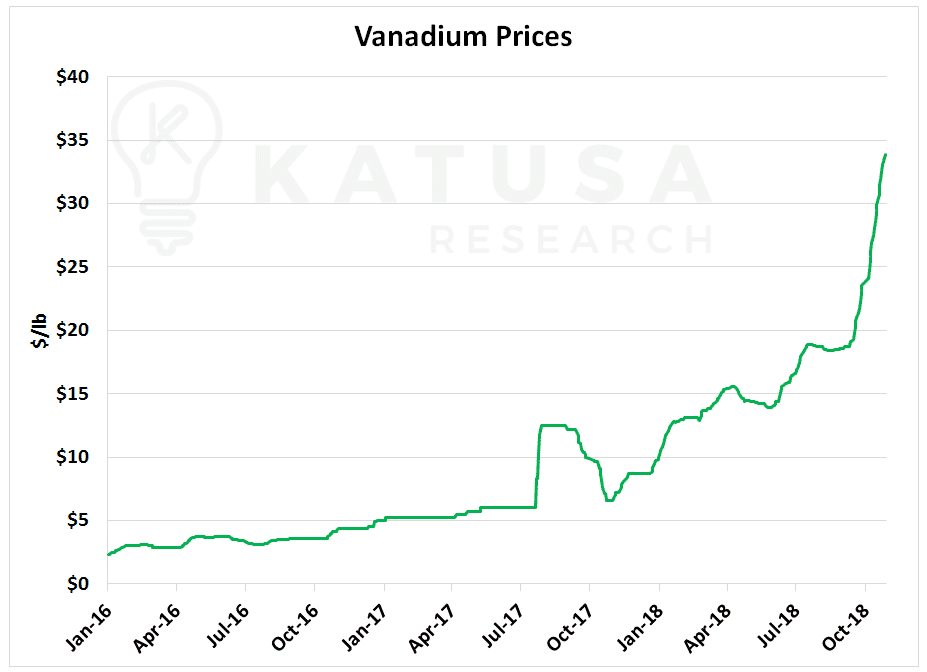 I’ve seen this type of small sector hype many times before. And so have you with lithium and cobalt.

Like those two niche metals, many “vanadium” stocks have spiked in price, returning doubles and triples in a short time. And some have even become 5 baggers in the month of October alone. Those kinds of gains are enough to hit everyone’s radar screens. Traders, investors and “me-too” companies alike will start piling on the momentum train.

Here’s what you need to know about Vanadium

For comparison, in 2017 the world consumed roughly 23 million tonnes of copper (50 billion pounds). Below is a chart which shows annual vanadium consumption since 2007.

Vanadium is mainly used as a stiffening agent in steel. Around 90% of annual vanadium production is sold to the steel sector. This makes the 2 industries highly correlated.

So why is everyone getting excited?

There are a few reasons why the vanadium sector has been exploding.

The steel sector itself is correlated to the health and strength of economies around the world.

As economies expand and develop they need vast amounts of new infrastructure. A lot of this infrastructure requires steel, which in turn requires vanadium.

One of the main catalysts that spiked interest in the metal is new steel regulations that China will be imposing in November 2018.

The new Chinese regulations are phasing out Grade 2 rebar which uses no vanadium in favour of grades 3, 4 and 5. Each of these new rebar grades requires vanadium. The higher the grade, the more vanadium that is required.

Renewable energy projects are springing up around the globe.

But the biggest issue with renewable power is that it is intermittent.

You can’t generate much in the way of solar electricity in the middle of the night. That’s why battery storage is so crucial to large scale renewable power. Think oil production before pipelines and rail takeaway. This is going to happen and will be a major game changer for electricity generation dynamics.

Vanadium flow batteries are now being pilot tested as a solution to industrial scale battery storage issues. But it is still very early stage.

If vanadium flow batteries do become a go to metal for utility size energy storage, it would open up a huge amount of new demand for vanadium.

Dirty Secrets in the Vanadium Sector

Just because the vanadium sector is small, doesn’t mean that vanadium is rare.

Vanadium is actually fairly common, and can be found as a secondary metal in many types of deposits.

Most of these secondary deposits contain low grade vanadium mineralization. But at current vanadium prices, those marginal deposits become economic. Which opens up a plethora of new potential supply. This is very similar to the crappy/low grade copper and nickel projects which magically turned into cobalt projects last year.

You will see many crappy uranium projects now be touted as vanadium stories.  It’s neither cheap nor easy to produce a radioactive material. Buyer beware.

The second dirty secret is that there is actually a sizable amount of production capacity which is currently offline.

Total production capacity in the vanadium market is around 150-160 thousand tonnes per year. But right now, production is only around 95,000 tonnes.

A large amount of vanadium is produced through Chinese co-production facilities, which produce both steel and vanadium. Some of these facilities are currently shutdown or operating at lower capacity rates.

It’s no secret China has a huge pollution problem. To curb some of these effects the government has forced the closure of several large steel and vanadium facilities.

I believe that both steel and battery manufacturers will want to secure a long-term supply of low cost, metallurgically recoverable (metallurgy that actually works) vanadium production in a non-AK47 nation that is friendly to mining.

I do like commodities that don’t just depend on continued growth in China.

Vanadium has the benefit of growth demand from China. But the reality is, 30-40% of global vanadium demand is directly correlated to the Chinese rebar market. If Chinese rebar demand slows down or contracts, vanadium prices will pull back significantly.

In these niche markets it’s important to not get too over exposed.

Be careful and invest only with speculative capital that you can truly afford to lose 100% of.

I’ve been looking for years for the right vanadium project. I have a database of every single deposit globally.

Do not invest in any projects that are using anywhere near current spot prices in their economics. I specifically asked a large producer of vanadium if he could get an off take at $25 per pound, while vanadium was $32 per pound and he couldn’t lock in a hedge or off-take.

So, if you are going to play a niche market like vanadium, make sure you are using say $15 per pound not the current $30+ per pound spot price.

Also, make sure you invest with a management team that not only understands the niche metal markets, but have direct success in the niche markets. Just because you know how to finance or build a mine, doesn’t mean you understand the complexities of the niche markets. Niche markets are very different than the large commodities such as copper or gold.

If you want the real deal – follow the link for details on my premium research service, Katusa’s Resource Opportunities.

Katusa’s Resource Opportunities is what I am doing with my own money for exposure to the vanadium market.