Over the last six months, it has become very apparent that our global economy is changing. Yet most investors seem entirely complacent.

FTD’s™, aka Financially Transmitted Diseases, will start to appear and be used more frequently.

And the policymakers at central banks globally will apply these FTD’s to combat everything you’re reading about in headlines today to battle recessions and a deflationary market.

The global economy is experiencing tailwinds, headwinds, and crosswinds like never before…

Trade wars have sent prices for copper, long the bellwether of economic activity, to 52-week lows at $2.50 per pound.

Safe-haven assets like gold have to come to the forefront as gold regained $1,500 per ounce for the first time in 5 years.

The main character in this new world is Financially Transmitted Disease known as NIRP.

This key topic that is moving today’s markets is the concept of Negative Interest Rate Policy (NIRP).

NIRP is the single biggest drug for an infected financial system. And it’s only getting started, right under your nose.

Want to borrow money? Sure no problem, give it back to me in 10 years with zero or even negative interest rates. That’s not cheap money, that’s free money.

But we all know there’s no such thing as a free lunch. And when the flow of capital eventually halts, the harsh reality of being infected with an FTD will become apparent.

There are always lessons to be learned from past crises.

A Crisis in the Safest Place on the Planet Unfolds

Known as the “Playground of Europe”, Switzerland is recognized for its beauty and safety.

It has low crime rates, a peaceful nature (literally and in international relations) and it’s a popular country where the rich park money.

It’s routinely voted as one of the best places to live. And it has one of the most prestigious passports and citizenship you can obtain.

What you may not know, is that Switzerland had a major recession in the 1970s.

It got so bad that Industrial production fell by 15% in 1975, while exports declined by nearly 10%.

Unionized workers went on strike every week. Who knew there could be such civil unrest in such a peaceful country?

So what makes the Swiss recession significant?

This recession was caused by negative interest rates and an ever-strengthening domestic currency.

After U.S. President Nixon lifted the gold standard in 1971, currencies began to float and valued themselves based on interest rates and economic conditions within each country.

The U.S. Dollar declined against many major currencies.

And as the dollar declined, the market sought refuge in safe-haven assets like gold and the Swiss Franc. Take a look… 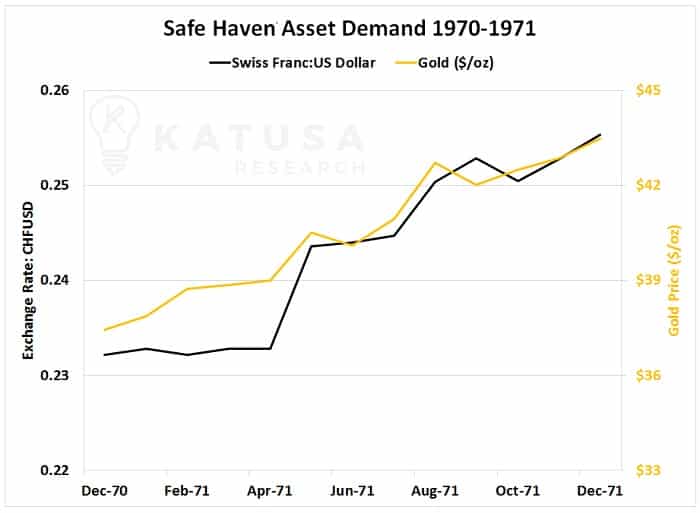 The value of the Swiss Franc began to soar, and Swiss exporters were angry. The business was suffering.

As a last resort, the Swiss enacted a 2% per quarter penalty on any non-resident holding Swiss Francs. This works out to a negative 8.24% annual interest rate. 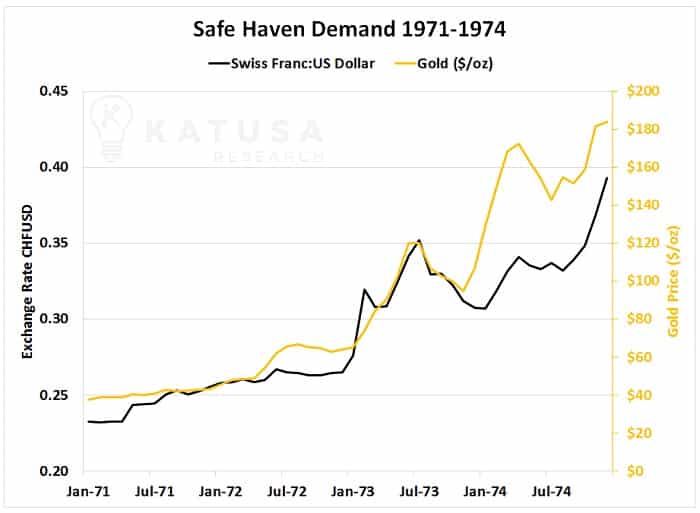 The Middle East oil embargo of 1973 once again pushed the demand for safe-haven assets sky high.

Even with negative capital controls in place, the Swiss Franc continued to soar.

In November 1974, the Swiss Government imposed a non-resident annual penalty on held deposits of -12%.

Things only got worse for the Swiss as the Franc continued to appreciate.

In January 1975, the Swiss government had an emergency meeting. The Swiss Central bank put a 41% annual penalty on foreign deposits.

And Then the Recession Hit Hard…

Pre-recession Switzerland had 81 unemployed people. Yes, 81 people. I had to triple check that stat on Bloomberg.

At the peak recession, over 30,000 Swiss citizens were unemployed. That’s an unemployment rate increase of 36,900%.

It took half a decade for Switzerland to crawl out from the depths of the recession. The Swiss economy didn’t regain its true strength until the early 1980s.

Now if that story doesn’t get your spidey sense tingling, I don’t know what will.

Most certainly, our current economic situation is different – we don’t have the same inflation setup. But we do have a very strong U.S. Dollar currency set up and a negative interest rate environment.

Could the United States and the USD become the Switzerland of the 1970s?

It’s very clear to me that we are entering a new global paradigm of negative interest rates (NIRP).

And I just published my thesis on Keynesian Quantum Economics™ to my subscribers this past week.

Make no mistake, these negative rates are the financial heroin.

It’s an FTD that will be difficult for your family, friends, and neighbors to not be affected by.

I believe this financial heroin is going to last longer than people think.

This is not a 6-12 month policy for Central Banks around the world to ‘kick start’ their economy till the next election.

Eventually, earnings and economic growth will slow. Transfer payments will slow, along with salaries.

As this plays out, people will try to save every penny they have.

Most of it will be used to make the next payment on that overpriced house they can’t afford and that they are significantly underwater on at current rates. The whole economy as a whole will slow.

And that’s when the bubble pops.

But, we are far from that right now.

Don’t get me wrong, I hate to be a doomsayer.

But I don’t feed my family or pay my office’s salaries by being a cheerleader. I’m a nice guy, but I’m also a realist.

NIRP is already having a massive impact on the prices of commodities across the board, and so few people are even aware of it. And I’m laying out exactly how it affects Gold, Oil, Uranium, Rare Earth Elements, Copper and other major commodities in my latest issue of Katusa’s Resource Opportunities.

I am positioning myself to take full advantage of the strong U.S. Dollar and rising precious metals prices.

And I think we’re just in the first leg of this multi-leg bull market on the best-run gold companies.

Do yourself a favor and be ahead of the crowd by joining me today. 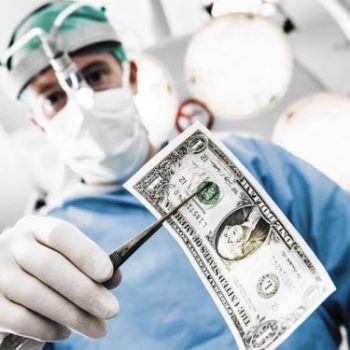 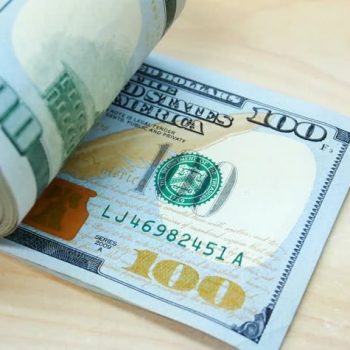 Throw Everything You Know Out the Window