HomeResearchGoldThrow Everything You Know Out the Window
4034 seen

Throw Everything You Know Out the Window

We’re on the precipice of a new adventure in the markets.

Never before has so much data and information been available to investors around the globe.

And yet, there’s no consensus on what’s going to happen.

China’s cracking down on Hong Kong.

Oil transport vessels are being seized.

On top of that, we have a very gloomy global economic environment.

A Signal for Coming Chaos?

All of this is fuelling the fear trade and sending gold to record prices in almost every currency.

And most important to your portfolio… the mighty U.S. Dollar is actually rising with the price of Gold.

Exactly what is going on?

Is the Rise in Gold Already Signalling a Recession?

Last week we talked about the negative yield from governments and corporates alike.

And one of the most talked about recession indicators, the 2 year vs 10 year treasury chart, actually inverted. 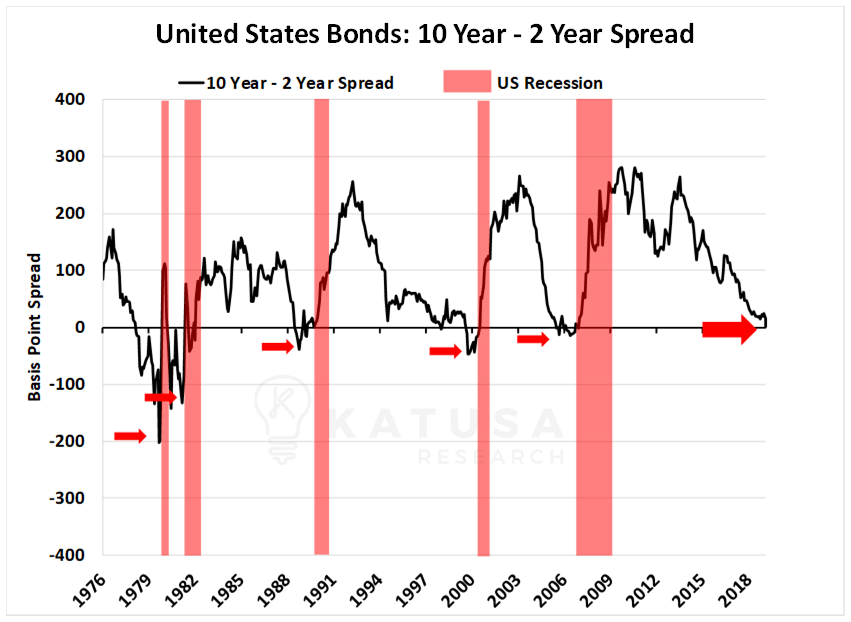 This had every analyst and talking head signalling a recession is around the corner.

Your friendly neighbourhood fear-mongering newsletters are likely all working on end-of-the-world campaigns, at this moment, to capitalize on this. (Fear sells better than greed in the newsletter world).

And many portfolio managers shun gold and provide valid reasons to confirm their bias.

It doesn’t pay interest. It costs you to store it.

Gold has been a safe haven in recession times going back to any one of your favourite roman emperors.

And I’ll show you the data in a moment.

Note: I’m not saying a recession is around the corner, but I will sure as hell prepare my portfolio for it if one comes, in two ways:

Again, one way to get bear market insurance is to buy physical gold.

In bear markets, gold tends to perform better than stocks. This is because investors see gold as a safe haven.

Pulling up historical data tells us that gold outperforms stocks in periods of recessions and market corrections.

One example is that gold spiked in 1980 at the start of the 80’s recession, when the price of the yellow metal soared to $850 per ounce.

In the table below, you can see how gold tends to perform against the S&P 500 during the most extreme corrections since 1976.

The data shows that gold will perform better than the S&P 500 if or when there is a recession in the future.

Below is a chart which compares the returns of the S&P 500 to gold. You’ll see during significant pullbacks in the S&P 500, gold performs very well. 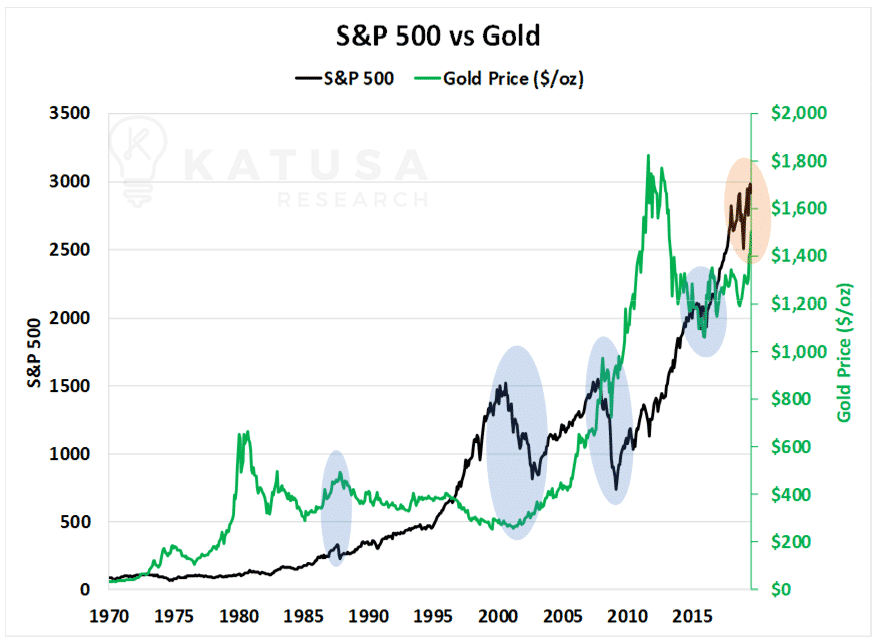 Owning physical gold makes a lot of sense. Just be careful where you store it.

The Race to Negative Yields

Negative yields have become a major talking point in the global bond market.

Yield reflects the return an investor can obtain holding the bond to maturity.

It seems crazy to lend someone $100 dollars and get back $99 in 2, 5 or even 10 years. But that is exactly what is happening in most of Europe and Japan.

Could you imagine loaning someone money for 30 years and getting back less?

Currently, the total value of negative yielding debt in the world is over $16.4 trillion. Corporate debt makes up roughly $1.4 trillion, and government debt makes up the residual.

Below is a chart which shows the skyrocketing quantity of negative yielding debt. 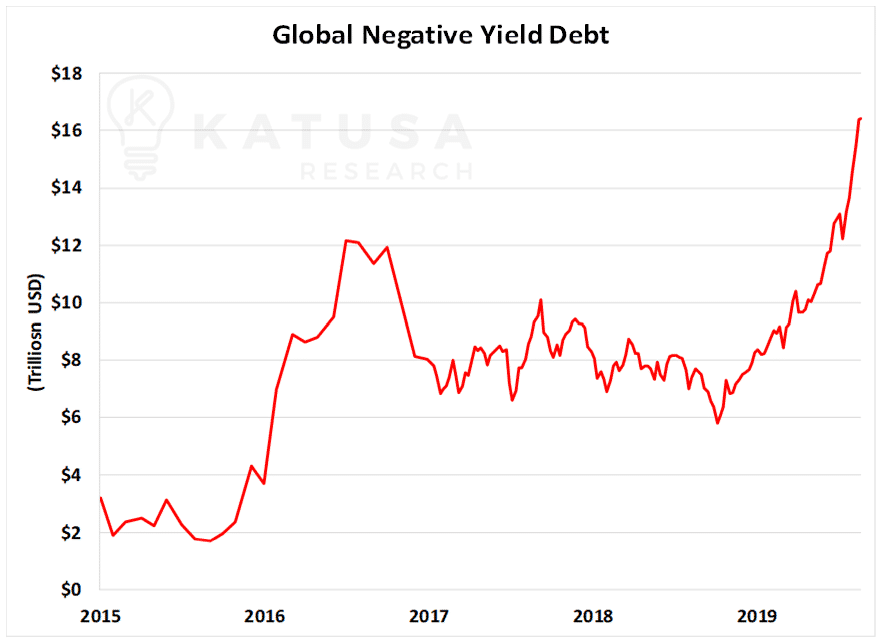 The questions you should be asking yourself are these:

“Will the U.S. Fed continue on the path of cutting rates with a recently spooked stock market?”

“Is Quantitative Easing 4 about to flood markets?”

For generations, it was established that…

And in this game, you were either Team USD or Team Gold… unless you were Marin Katusa and on Team Profit.

I’ve stated for several years now that the U.S. dollar will be very strong.

Ironically, it’s the most hated currency of gold bugs. But yet, what other currency would you rather own?

USD’s are accepted everywhere I travel. It’s in demand, no matter how much the Fed prints (because let’s be real, all other governments are printing just as much, if not more).

I also own physical gold as my financial disaster insurance. And as we’ve shown, it’s recession insurance.

In addition, I have invested millions of my own money into the best gold producers and developers. This gives me extra leverage to rising gold prices.

And what’s happened in the last year is blowing economists’ and Twitter financial gurus’ minds, but I’ve repeated this over and over to my subscribers… We have U.S. Dollar strength AND a rising gold price. 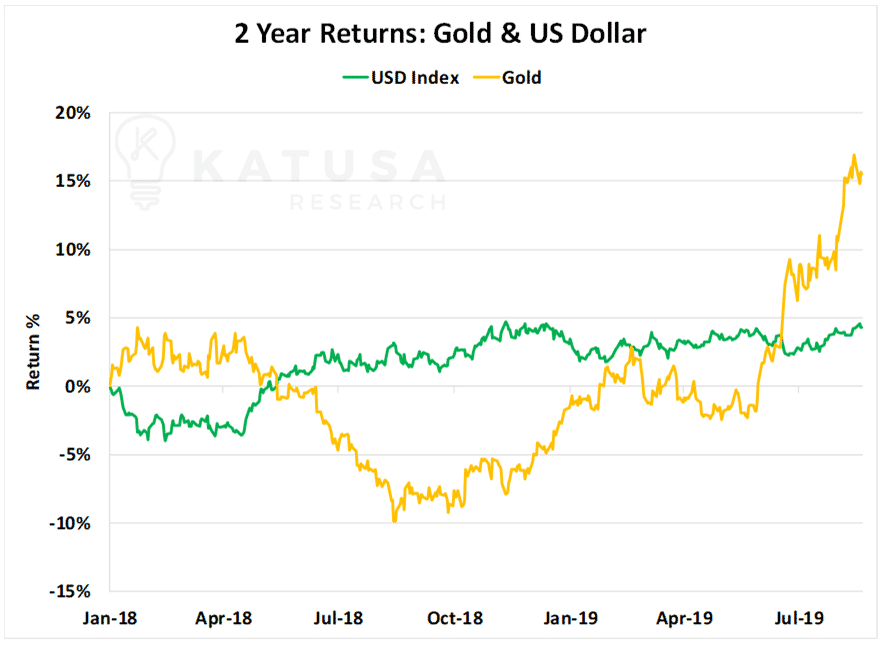 This goes contrary to almost every article and piece of research on the matter. Up to now, it was conventional wisdom that when the USD rises, gold falls.

Welcome to the new normal.

I get this question a lot.

How many stocks should I own?

What currency should be my base currency, what other currencies should I hold?

How much should I allocate to each position?

All of these are fundamental questions that need addressing.

Contrary to many in the industry, I am very open with my positions and investment thesis. Here is a snippet of what you can find in my free report on how to become a Resource Market Millionaire.

Cash: I remain bullish on the U.S. dollar relative to other major currencies. Even if the U.S. Federal Reserve cuts rates, other countries are going to continue to cut rates also. NIRP is not an anomaly that will be ending very soon.

It’s the new normal and will be around for at least a few years, maybe even much longer.

This means that the U.S. dollar will remain strong relative to these other currencies. I don’t see another currency I’d rather own at this point.

Gold: Across the world interest rates are falling and heading for negative territory. This is bullish for gold.

In addition to my physical holdings, I remain long the best managed and leveraged gold producers and gold developers that are run by management with skin in the game. These leveraged plays provide significant upside to rising gold prices.

I expect the volatility in the markets to continue for the foreseeable future. This provides both increased risk and increased reward. It’s a fine balance we must play as speculators and investors.

I am very excited about our holdings, which are proving to be big winners in this market.

To see all the stocks that I’m watching, buying and selling for a profit in this current gold market, consider becoming a subscriber to Katusa’s Resource Opportunities today.