Of all the things people can say about a stock market, a country, or a commodity, few indicate huge potential profits ahead as much as the five magic words of despair. They are as follows…

If you read my work for some time, you know why those words should interest you as a speculator.

Speculating during a crisis can put your wealth creation plans on steroids (read my full educational piece on the subject here).

The reality is that nuclear energy has provided – and continues to provide – the world with stupendous amounts of clean, safe, emission-free electric power that is base load, meaning its reliable all the time. Coal, which is also used to generate electricity, has killed far, far more people than uranium.

The average citizen also doesn’t know the vital role that nuclear power plays in the American economy. America gets 20% of its electricity from nuclear power.

Nuclear power provides electricity for over 20 million homes, almost twice the number of homes as there are in California. Without nuclear power, the lights would go off for one in five American homes. Below is a chart that shows where the U.S. gets its electricity from. 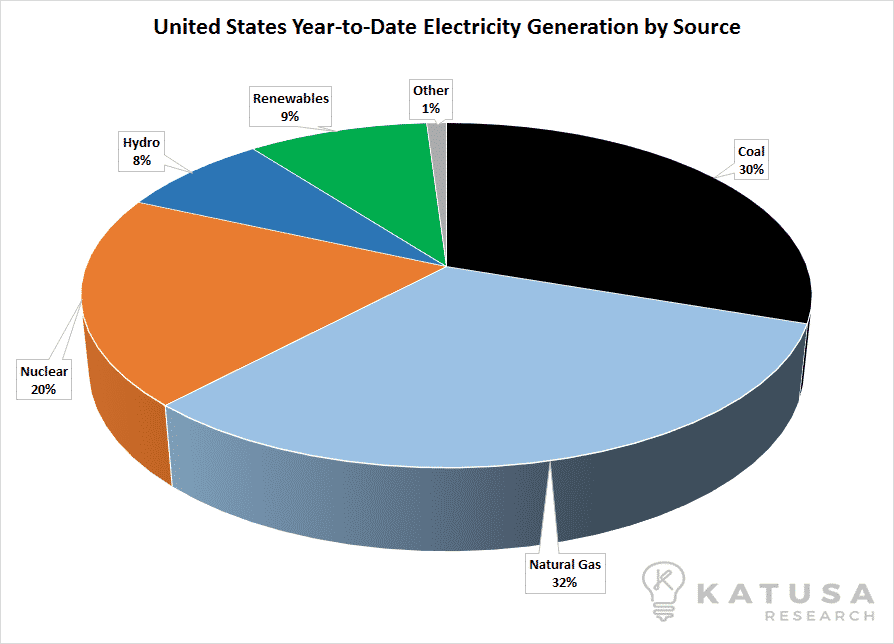 Over the past few years, many people have said those five magic words – “Can it get any worse?” while discussing the deeply depressed uranium market.

Conditions have been so bad that people who know it the best have given up on the sector and now love it the least. That is a good sign for a speculator.

I believe those words indicate we have passed the worst in the uranium downturn. When all give up all hope, and only expect more pain, it’s a sign we have reached the bottom.

Which gives you – the would be speculator – limited investment downside and huge upside. But as any seasoned speculator would tell you, we needed to see some particular catalysts to turn fully bullish on the sector.

And just recently, we got two major catalysts.

To put this into perspective, shutting down McArthur River, which is a high-grade uranium mine in the Athabasca basin in northern Canada, would be the equivalent of shutting down all of Saudi Arabia’s or Russia’s oil production (each contributes around 10% of the global supply).

McArthur River is a tier-one world-class asset that is a low-cost producer. Shutting down the mine is a bullish development for the uranium speculators.

You probably know the uranium sector has been a terrible place for investors since March 11, 2011. On that day, one of the biggest earthquakes in recorded history struck the east coast of Japan. The quake and the resulting tsunami killed more than 15,000 people and caused over $200 billion in damage.

In the weeks that followed, events at Japan’s Fukushima I Nuclear Power Plant dominated global headlines. The earthquake and tsunami caused structural damage to the power plant, which knocked out vital cooling systems. This caused reactor meltdowns and released radioactivity into the air. The disaster turned entire nations against nuclear power and its fuel source, uranium.

Before the earthquake, uranium traded for over $70 per pound. After the quake, Japan dumped its substantial above-ground uranium supplies onto the market. This dumping, paired with reduced demand, sent uranium into a bear market that took prices below $20 per pound. 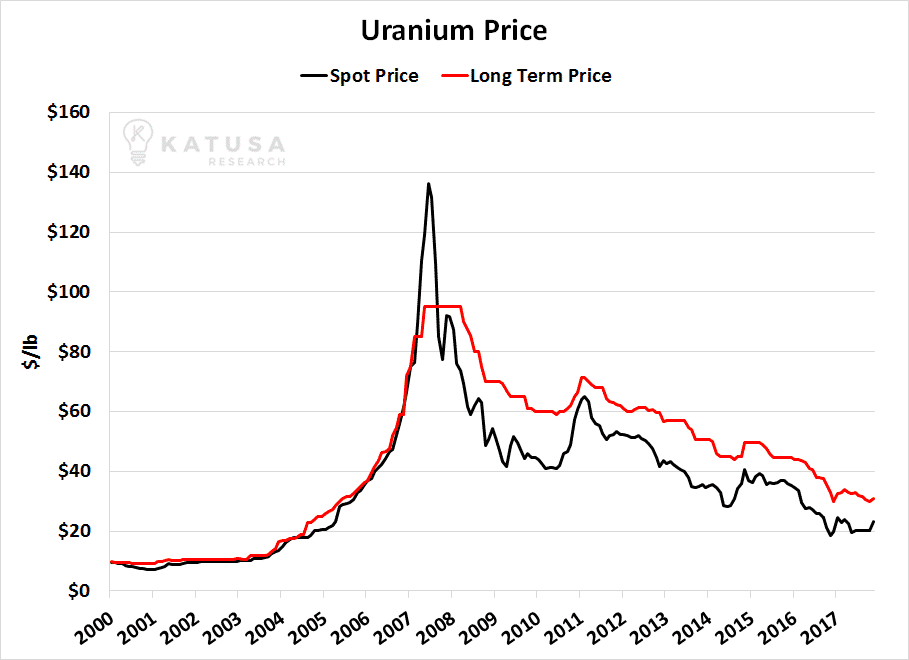 However, as I detailed in January, the world still needs a lot of nuclear energy.

That demand will not be satisfied with spot uranium prices under $20 per pound. It costs the mining industry more than that to get it out of the ground. That’s why Cameco and other producers are shutting down production.

Seasoned resource investors know one of the ultimate signs of a market bottom is when an industry’s lowest cost of production is below the current market price. When this situation occurs, either the price of the resource goes up or the producers go out of business and the world goes without the resource. In the case of energy resources, the world always chooses to keep the cars running and the lights on. That’s why the saying goes, “The cure for low prices is low prices.”

In 2015 and 2016, I didn’t turn very bullish on the uranium sector because I wanted to see low prices cause major production shutdowns like the one at McArthur lake and one we’ve seen this year in Kazakhstan (the world’s largest uranium producer).

I believe the McArthur shutdown is a major step forward towards restricting uranium supply and even moving towards a global supply deficit soon.

The second major catalyst was the world’s largest producer of uranium, Kazatomprom, which produces 40% of the global primary uranium production, that just announced a 20% reduction of production over the next three years.

Can we trust the Kazatomprom reductions?

The sound answer to that is no more and no less than we can trust the oil markets given the announced OPEC cuts. Below is a chart that shows how the cuts affect the overall uranium supply. 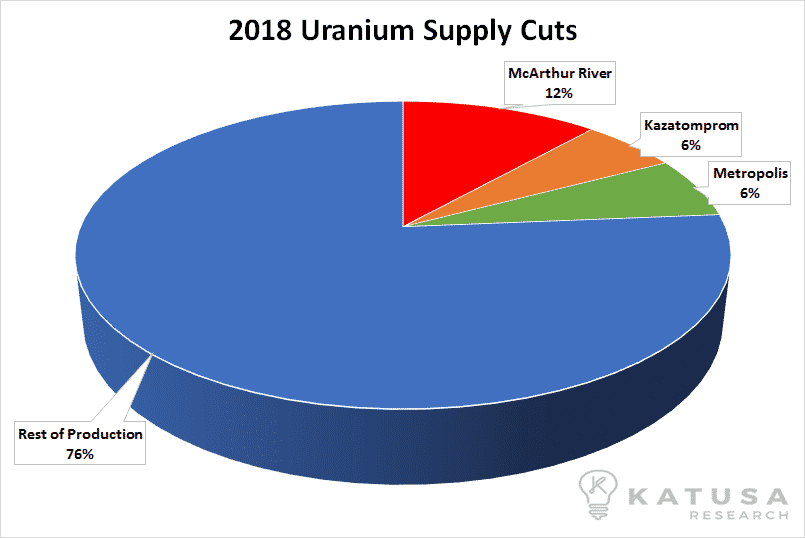 Some market participants are of the same mind. Since Cameco’s announcement, uranium stocks have rallied strongly. However, they are still deeply depressed, very cheap, and far, far below their 2011 levels.

As of this writing, uranium is trading at $25 per pound. I think it’s very realistic to expect spot prices to increase 20% to reach $30 per pound in 2018.

It will take over 25 nuclear reactors (whether new and/or restarts in Japan) combined to get the spot price of uranium above $40 per pound unless a major cut in production happens in Kazakhstan.

There will be no shortage of uranium at $40 per pound. The Kazakhs and Cameco (60% of the global primary uranium production combined) can make decent returns at $40 per pound uranium.

At the same time, the utilities don’t really care whether uranium is $20 or $40 per pound because once a reactor is up and running, the price of uranium makes up less than 3% of the operating costs. Unlike natural gas or coal which make up over 35% of the final cost.

Where I Put My Money in the Uranium Sector

The key factor for a utility is securing stable secure supply to keep its reactors operating. We have seen the low for uranium prices.

I will continue with my prudent approach towards the uranium sector, which is only speculating inworld class assets and getting exposure to the lowest-cost producers in politically-stable jurisdictions.

Ps. Subscribers have enjoyed quick swing trades on a low-risk uranium producer that netted 15% and 36% gains on two separate trades. One of those trades took less than 10 days to come to fruition and we locked in our gains. To find out my two favorite uranium companies that are ripe to double with any rise in the uranium price, consider becoming a member to Katusa’s Resource Opportunities right here.