Did you know only one of the original Seven Wonders of the World exist today?

Although there is considerable debate on who originally created the ‘Seven Wonders of the World’—something no one can debate is what I am going to talk about next.

There are three incredible quotes Albert Einstein made regarding compound interest.

The first two you have probably heard, the third is not known as well and leads towards his secret investment formula.

But the third and lesser known one, from Einstein, is the quote I think is undebatable.

Let me differentiate between compound interest and simple interest.

With simple interest you only make money on the principal. There is no “interest on interest” factor.

Compound interest grows your money faster because growth applies on two items – the Principal and the Interest.

If you are a low risk investor, stick to compound interest because it’s better than simple interest.

However, things are different in a low interest rate world. The investors with cash who have been conservative, prudent and safe have been punished because of the low interest rates paid to exactly those who should be getting better rates. The savers have become the prey. But there is a solution to this predicament that I will get to shortly.

For example, savings accounts have interest rates so low they might as well be nonexistent.

The actual real interest rate being loaned to companies is considerably higher than what we are getting paid by the banks.

This is a Tale of Two Interest Rates – the bank rate and the street rate.

I will be featuring this reality in groundbreaking detail per sector for subscribers in the upcoming May issue of Katusa’s Resource Opportunities. It will truly be an epic report.

Investors have ventured into paying up for yield, which means paying more for the underlying asset. This is risky, because the yield might be 2.5%, but now there is risk to your principal.

As Warren Buffett said, there are two main rules in investing:

Buffett is a great investor, and his words above are ones to live by.

But what if I’m able to take the math behind compound interest and combine it with value investing that Buffett has preached his whole life?

What I am about to share is 9th Wonder of the World.

Katusa’s Investment Trifecta is based on the concept Einstein so correctly stated was the Eighth Wonder of the World. By combing through years of historical data, we would like to present one of the most powerful investment concepts known.

(Side Note: Because we have downloaded so much data from our expensive data sources, we actually hit the data cap – twice! – trying to get a complete picture that I’ll detail in the May KRO. This is one of the largest research projects we have ever completed!).

Katusa’s Investment Trifecta explains a consistent pattern of making extraordinary gains over the long term with:

This method isn’t advertised much because frankly, there aren’t very many ways to execute it in real life.

That’s because – usually – either the balance sheet of a company isn’t bullet proof, or the share price is overvalued because investors are chasing yield.

But it does work.

For example, Exxon did just that for 100 years.

If you bought 200 shares of Exxon back in 1980, this $876 investment would be worth $1,220,215 before taxes and broker commissions using Katusa’s Investment Trifecta strategy.

If you invested $160 in 1980 into Exxon using Katusa’s Investment Trifecta, you would have just over $219,000 before taxes. Yes, the math works. Do I have your attention now?

Let’s say you are old like Doug Casey and you were buying stocks in 1962, what would the returns look like? Below is the green line that shows using Katusa’s Investment Trifecta vs just buying and holding on the same stock. 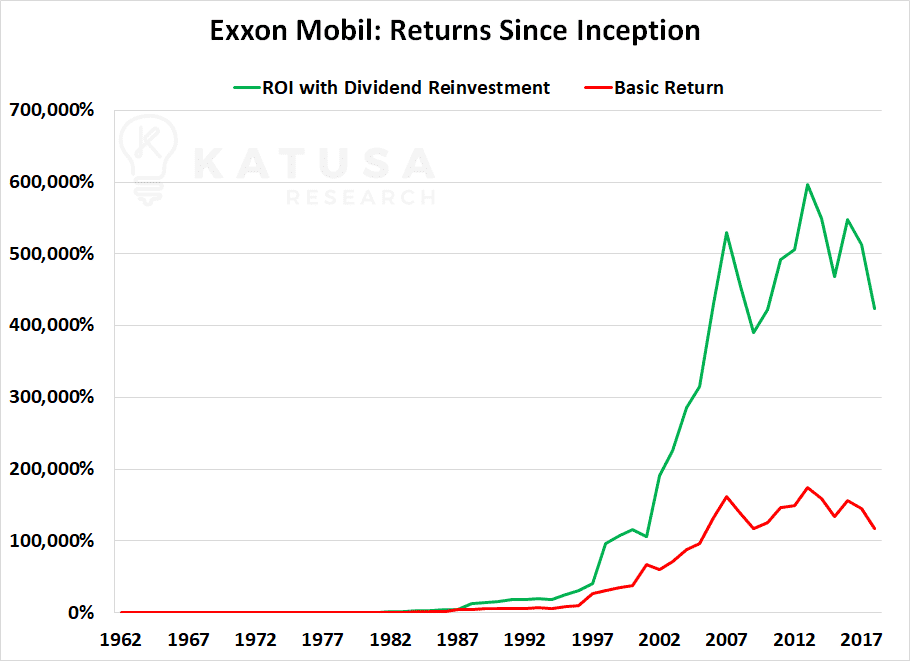 Here is the best part of this. You aren’t buying some speculative exploration company with no revenue in the middle of some shit hole where the locals hate you.

With Katusa’s Investment Trifecta, you are buying industry peer producing low risk stocks, that pay dividends and are the top producer in their sector.

If you are a millennial today who has very little money, rather than buying the next gadget or wardrobe to look like you are from the 1980’s, buy stocks that meet the Katusa’s Investment Trifecta criteria. Plan for your future now.

This the power of Einstein’s 8th Wonder of the World, compound interest.

But it’s the 9th Wonder of the World, Katusa’s Investment Trifecta that will make you and your estate millions with only $1000 invested today.

It’s not just Exxon. If you bought Chevron, you get an even better result. It’s not just the oil sector. We can prove Katusa’s Investment Trifecta works for the banking, tech and medical sector. Now, of course, this data is based on historical data. But the math works. And the formula works. Now is the time for your money to work for you.

Because of my background in mathematics, this is something I have toyed with for years—and I’ve decided to publish the strategy to all, for free.

You don’t need to pay thousands to sign up to my premium newsletter. But to find out which stocks I am personally buying, at what price and when… you need to subscribe.

I have found two stocks that are cheap and not followed by main stream media and investors. They have a clean balance sheet, a moat around their business (aka Buffett approved) and pay above industry average yield (interest paid to shareholders) on the stock.

Not only will we make interest on both the principal and interest, but the share price will go up – so we are going to have what I call the Investment Trifecta.

One of the world’s most successful value investors (one of Warren Buffett’s disciples) is buying the stock. This Buffett prodigy is now one of the largest investors in the company. This company has:

I will have a complete update on the stock in this coming month’s issue of Katusa’s Resource Opportunities.

This company is one I am looking to buy more of. It should be in the portfolio of all serious resource investors.

Not only has one of the wealthiest people in the world bought lots of stock – at a higher price – so have his family members and close friends. And other Billionaires use their products and want the company shares also. This story is better right now than it has been at any time in its past.

This company also has:

In both of my Investment Trifecta stocks—we are buying at prices lower than what the insiders who run the company have paid for their own shares. We get to buy the stock cheaper than the billionaires who paid higher prices.

These are stocks with real FREE CASH FLOW. I know most analysts don’t understand this concept in the resource sector, because Free Cash Flow is the unicorn metric in the mining business.

In theory… they know about it, but it’s rarely seen. Free Cash Flow is the unicorn of mining.

Free Cash Flow is one of the most important metrics for shareholders to understand. For mining to become in vogue again with the big generalist funds, Free Cash Flow will be a must.

Without Free Cash Flow, you – the shareholder – do not get paid.

I cannot emphasize the importance of Free Cash Flow.

Just remember what Einstein said himself,

Compound your wealth with Katusa’s Investment Trifecta stocks. These aren’t speculations. These are realities.

I plan on adding more companies to the Katusa Investment Trifecta portfolio when their metrics meet my criteria.

I’ve already put thousands of hours into doing just that. So, if you want to save yourself the time, and do your portfolio and family a favor – by taking the step to becoming a member of Katusa’s Resource Opportunities.