A surprise event with a major impact is known as a Black Swan.

The theory was made famous by Nassim Taleb in his books Fooled by Randomness and later in The Black Swan. In his books, Nassim argues that many of the world’s greatest feats are in fact black swan events.

A relatively unknown piece of US legislation from the year 1890 has the potential to derail the global oil industry in what many would consider as a black swan event.

The Oil Producing and Exporting Cartel (OPEC) is a group of 14 countries that produce one-third of global oil production. The countries in OPEC are: Algeria, Angola, Ecuador, Guinea, Gabon, Iran, Iraq, Kuwait, Libya, Nigeria, Republic of Congo, Saudi Arabia, United Arab Emirates and Venezuela. While not officially included in the group, Russia now plays an active role and is present at major OPEC meetings. Coining the new groups name “OPEC+”.

Below is a chart which shows the most recent monthly production for each country in OPEC+. 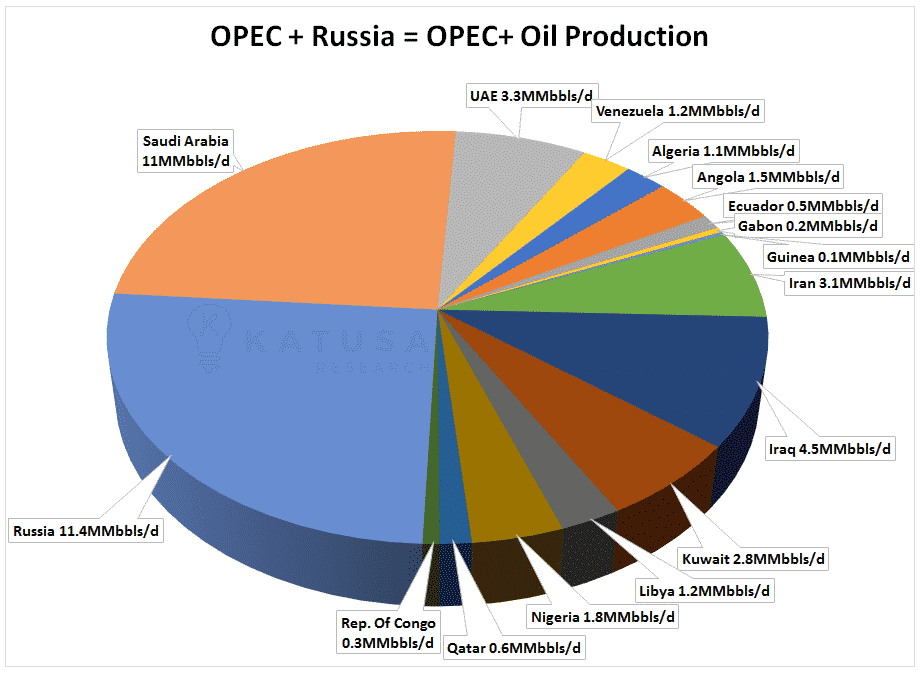 On December 7th, OPEC+ announced a combined production cut of 1.2 million barrels per day of crude oil based on October 2018 production levels.

The deal implies a reduction of 800,000 barrels per day from OPEC nations, and a 400,000 barrel per day reduction from the “Plus” group, namely Russia. All told, it works out to 1% of total global production coming offline. The supply reduction was felt immediately as oil prices rose 6% on the news.

This came much to the dismay of President Trump. Trump is never shy of sharing his opinion, especially when it comes to oil prices, which he has stated many times are “artificially to high”.

President Trump has made it his number one goal to put American interests above all others at seemingly whatever the cost.

If he really feels so strongly about OPEC+’s decision-making process, then there’s a tool that he could use to dissolve the cartel.

The Sherman Antitrust Act of 1890 was passed by Congress and signed into law by US President Benjamin Harrison. The law attempts to prevent the artificial raising of prices by restriction of trade or supply. The goal of the act is to protect consumers from single producers controlling the price of a product and gauging the consumer.

Trump and the Sherman Act

There’s a little-known amendment to the Sherman Act which President Trump could use to derail the cartel and lower oil prices. The amendment removes what is known as the “state immunity shield”.

Ironically, both Senator Barack Obama and Senator Hilary Clinton both voted in favor of this amendment in 2007 but the bill died in Congress.

At the heart of the bill, it allows state owned organizations to be treated as companies, rather than as a part of the state. It means national oil producing companies like Saudi Aramco could be sued under US antitrust law for anti-competitive attempts to limit global petroleum supply, and the consequent impact on oil prices. With almost certainty these state-owned producers would be found guilty of price manipulation and limiting supply to increase profit.

Signing something like this bill into law could be something right up President Trump’s alley, or at least the threat of using the Sherman Act to protect America’s interests.

It would effectively put in motion dissolving the big bad OPEC, “the bullies who have been gauging American consumers”, as Trump puts it. It fits his America first mantra and would be a feather in his cap heading into the 2020 presidential election.

Pulling the trigger on a bill like this would definitely sour relationships between the US and OPEC nations. But, from an oil reliance perspective, the Black Swan potential of the Sherman Act has never been better. Since 2008, American reliance on OPEC crude oil has fallen by over 50%. Most of the crude that the US imports now comes from Canada. The chart below shows American crude oil imports by destination since 2000. 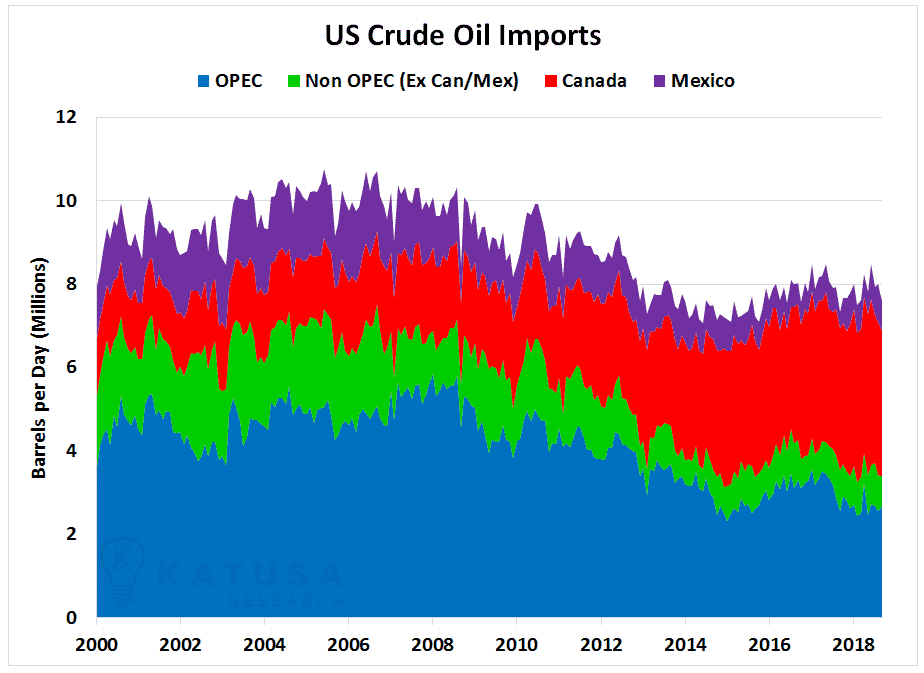 The United States produces significant quantities of light oil, which it blends with imports of heavy crude oil to make refined products like gasoline. Historically Venezuela was a key supplier of heavy crude oil to the United States. Venezuela used to supply 1.5 million barrels per day but today only supplies 650 thousand barrels per day. Over the past 5 years, the Canadian oil sands have become the dominant supplier of heavy oil for American refineries.

If Trump pushed through the Keystone XL pipeline expansion, it would more than make up for the Venezuelan heavy crude imports. The Keystone XL expansion pipeline from Alberta to the Mid-West United States has the capability itself to supply 830,000 barrels per day. Canadian heavy oil producers would happily sign up for 20-year commitments to supply crude oil to the United States.

Safe and secure crude oil supply, lower gas prices and dissolving the price gauging OPEC nations. It’s almost a layup for Trump and his band of “America First” staffers. All it takes is a little creativity and the oil market would have one heck of a black swan event.

Savvy investors don’t outperform the markets by following the herd. The savvy investors think outside the box and look for opportunities where others cannot see them.