HomeResearchAgricultureThe Most Important Resource on the Planet
3016 seen

What do you think the world’s most important commodity is? Is it copper? Is it gold?

No, it’s water. Water truly is a commodity we cannot live without.

Gigantic quantities of water are used in almost every food and drink we consume.

If you are from the west coast of the United States you may have heard of Kern County, nestled in the San Joaquin Valley.

If you’re just driving by, it may just seem like a dusty valley with rolling tumbleweeds.

In reality, it hosts some of America’s most prestigious ground for growing pistachios, almonds, and pomegranates.

For comparison, the entire city of Los Angeles with a population of 4 million requires less than 600,000 acre feet per year.

One acre-foot of water is the amount of water needed to cover one acre in one foot of water. It represents 325,851 liquid gallons.

For those that don’t want to visualize gallons of milk – and want barrels of oil instead, let’s divide by 42 gallons for every standard barrel of oil. This means Kern County requires over 3.1 billion barrels (130 billion gallons) of water every year.

Amazingly, nearly all of the water in the Kern County region is controlled by a single family. You may have heard of the Resnick’s empire. If you haven’t their backstory is truly fascinating.

Since 1970, Stewart and Lynda Resnick have grown their original 2,500-acre plot into a sprawling 180,000 acres. That’s 281 square miles. They are the largest private landholders in California.

Stewart Resnick didn’t come from money. In fact, his is a classic tale of a penniless Jewish immigrant family from Ukraine. Stewart’s family immigrated to the U.S. when he was a child, settling in New Jersey.

His father, a degenerate gambler, ran the neighborhood bar. He won and lost the bar several times over the years.

Eventually, Stewart made his way to the West Coast, destined for law school at UCLA.

He had a strong entrepreneurial spirit. Stewart and another Jewish frat brother bought a mechanical waxing machine and started a floor-waxing business.

He waxed floors in the evenings, when businesses were closed. He noticed there were no security guards around, and spotted a business opportunity. So he sold the cleaning business and started a security guard business.

Inflation took off in the 1970s, and with all that cash on hand, Stewart was looking for a hedge against inflation. He found 2,500 acres with oranges and lemon plantations. The assessed value was $27 million.

But Stewart was a shrewd negotiator, he paid just $9 million. A farming magnate was born.

Over the coming decades, Stewart would continue to acquire land.

He struck deals with Mobil, Texaco, and Prudential Life, all of which completely ignored the coming agriculture boom and sold tens of thousands of acres for pennies on the dollar. By 2008, Stewart owned 100,000 acres of San Joaquin Valley farmland. His company grew 65% of the nation’s pistachio crop.

Today, The Resnick Empire is Enormous

The Resnicks own not only the farmland, but also well-known brands such as Fiji Water, POM Wonderful and Get Crackin’ Pistachios.

The empire is estimated to be worth more than $4.5 billion.

All that power – and all that profit – are the direct result of Stewart Resnick’s savvy control of the most precious resource in Kern County: Water.

One of Stewart’s best trades was trading junior water rights for a share of the Kern County Water Bank. He gave up $30 million in water rights for virtually complete control of a $90 million, taxpayer funded water bank in Kern County, California. In years of drought, he’s been known to sell water back to the city of Los Angeles for 600% profits.

So it’s obvious that if you know what you are doing, there are some big gains to be made in controlling the right water resources in the right jurisdictions.

The major water resources are currently controlled by a handful of very secretive, private companies.

It’s a big money game, home to the who’s who of private equity and hedge funds.

At the same time, water is probably the most “emotionally” influenced resource on the planet.

The World Health Organization (WHO) passed a bill stating that every human on the planet has the right to clean water.

From a humanity perspective, this is a good thing.

From a corporate perspective, this will pose a problem for companies expecting to sell their water to the “people.”

But I don’t think the government will care about oil companies having to pay high prices for water to continue their production.

You probably see where I’m going with this now…

I think the next big play for water is over 1,000 miles east of Kern County, in the dusty fields of Lea, Eddy, and Reeves counties.

That’s the epicenter of the Permian Basin, the most important shale oil formation in the world.

Water is very important in the oil and gas world.

Water is used as the carrier of proppant which after the fracking process, keeps the formation open for the oil and gas to “escape up the well”. Water is also a major by-product of oil production. In fact, more water comes out of the well than goes into it.

Every year, oil and gas companies are spending billions of dollars to transport and treat water that is a by-product of the oil and gas production. These costs are only set to increase as production increases.

Last year in the oil and gas sector, over $30 billion was spent on water. Below is a chart which shows the capital spent in 2018 on water for each major U.S. shale field. 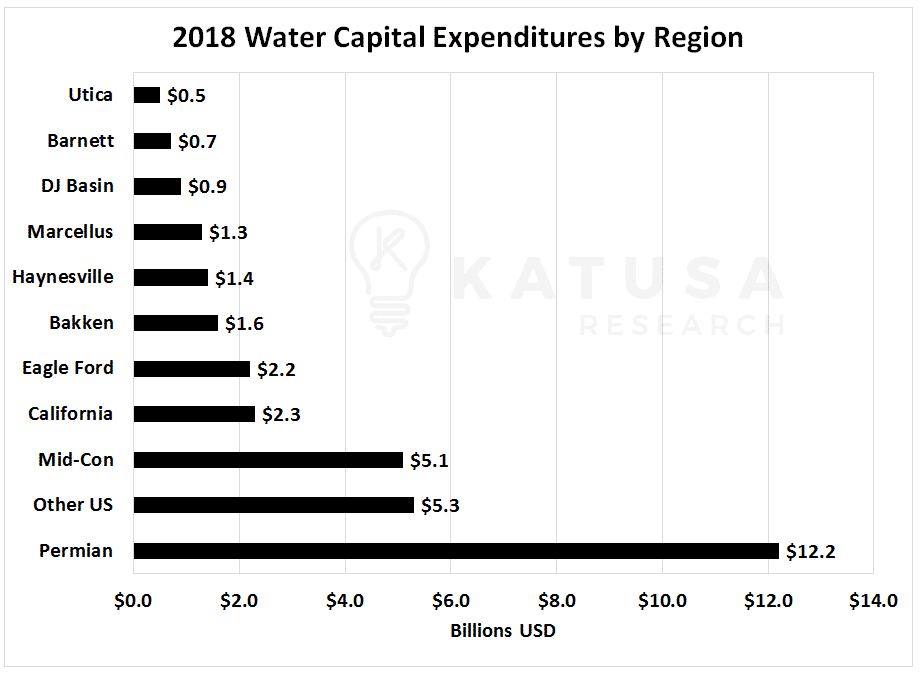 Water usage in the oil & gas sector can be broken down into four main categories:

The water sector is crucial for the next decade of U.S. oil production.

Below is a single well production chart for the Permian Basin, showing oil and water produced along with the water-to-oil ratio.

In a recent report, Morgan Stanley stated there were over 5,000 shale wells yet to be drilled in the Permian Basin. If each well requires 500,000 barrels of water to drill and complete, that’s 2.5 billion barrels of water.

If you apply this same math to areas like the Bakken or Eagleford, the amount of water that needs attention is staggering.

Clearly there’s an angle to be played here.

How I Want to Play Water in the Oil & Gas Sector

With all of this in mind…

I only want exposure to a company that generates revenue from each of the major water segments I outlined earlier: sourcing, gathering and transportation, recycling and treatment, and disposal.

Controlling the entire vertical is key. It makes the company invaluable to the oil & gas producers.

Think about it. Why deal with a company in each segment when you could deal with just one company for the entire process?

Almost all the companies that have significant pure-play exposure to water in the oil & gas sector are private.

In fact, right now there is only one public company which has pure play exposure to this rapidly growing sector. I’ve already talked to management and completed my due diligence on the company. My subscribers and I are just about to pounce on the opportunity which I think could be a big winner.