***As we entered the summer months, many investors wanted to believe a terrible time for oil and gas stocks was nearing an end. Now that we’re six weeks into summer, we see that’s not the case.

During the first half of 2017, oil and gas stocks were among the market’s worst performers. The Dow Jones US Oil & Gas Index declined 17%. Some of the more highly levered oil and gas stocks fell twice that much. After such a big fall, value-hunting investors began buying. But last week, we saw that oil and gas stocks are still vulnerable to waves of selling that send them to 52- week lows.

Take Pioneer Natural Resources for example. In the mutual fund and hedge fund world, it’s considered one of the premier independent oil and gas companies… a “go to” stock for getting exposure to the oil sector. After reporting second quarter earnings and stating it would delay drilling projects, Pioneer stock was crushed 17% in the following two days and hit its lowest level of the year. A true wipeout… in one of the sector’s best operators. 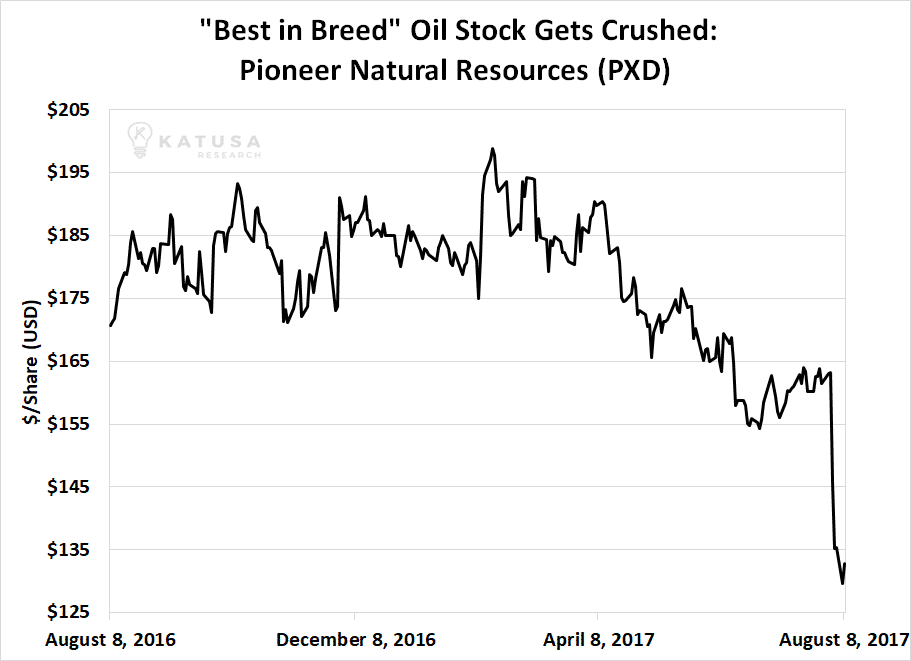 An especially notable loser last week was Canadian producer Seven Generations Energy. It’s a major player in one of my favorite areas for investment, Canada’s prolific Montney shale. It has exceptional assets. However, quality was no sanctuary last week. After reporting second quarter earnings, “Seven Gen” dropped as much as 18% and reached a fresh yearly low. 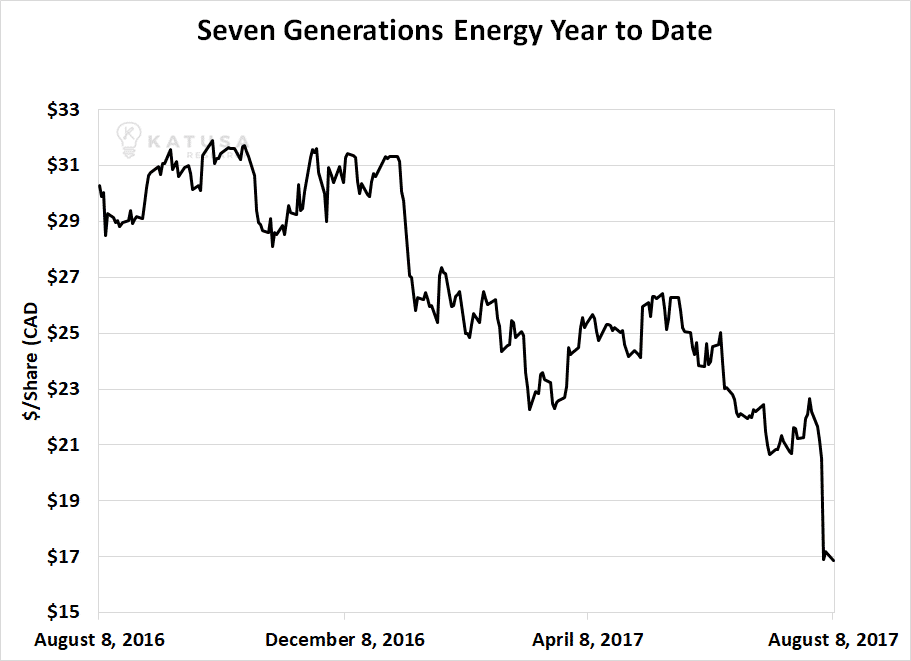 ***Regular readers will recall my writings on the oil patch back in June. At the time, I stated that although the oil and gas sector had suffered massively in 2017, more pain was on the way. Last week’s declines show that my expectations are being met. They are also moving us closer to a significant bottom in the oil sector. I’m getting closer and closer to pulling the trigger on high-quality names marked down to discount prices. More on this to come.

How Index Funds Are Impacting the Gold Sector

Over the past seven years, index funds and exchange-traded funds (ETFs) have dominant forces in the market. Typically, these funds don’t try to beat the market. They are the market. They own broad indexes (like the S&P 500) or sector groups (like retail or energy). And they’ve become widely popular with investors.

Index funds are so popular that many investors are warning about the effects index funds are having on the overall stock market. Since index funds buy stocks based on an index – not good old fashioned fundamental analysis – they have the potential to make popular, overvalued stocks even more overvalued… and warp the market.

What you may not have heard however, is how ETFs are influencing returns in the gold stock sector. Since spring, the smaller mid-tiers (sub 400,000 ounces of gold production annually) have experienced significant selling which we will explain later.  This significant selling of the smaller mid-tiers has lowered the overall mid-tier index relative to its performance to the senior index in past years.

And still true today, as a group, the mid-tiers overall are cheaper than the senior gold producers. 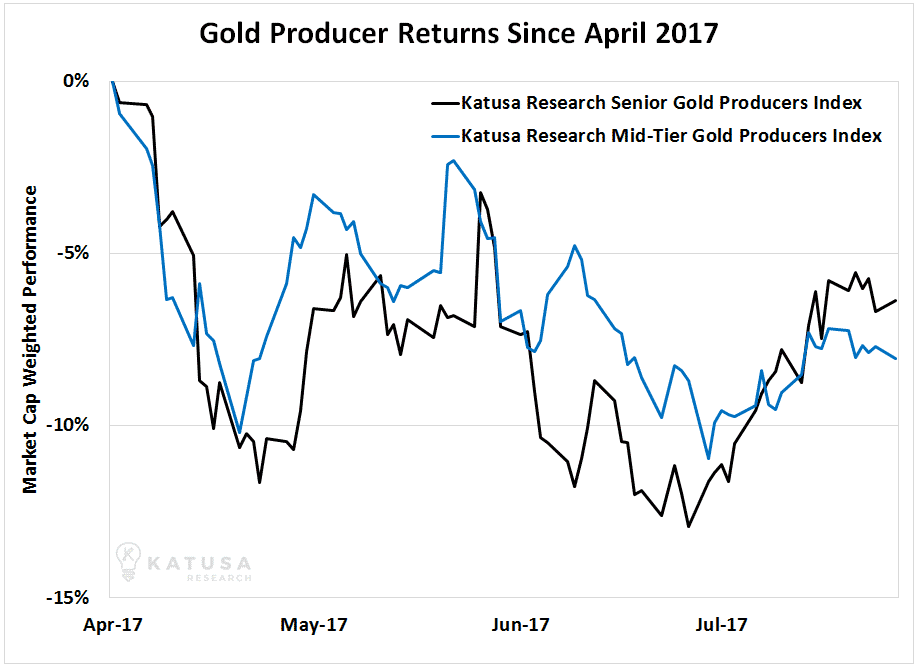 There are 15 primary gold companies that are publicly listed that produce over 1 million ounces annually.

There are 25 publicly listed mid-tier gold companies (on all global stock exchanges) that produce between 250,000 to 1 million ounces annually.

The mid-tier gold producers have a more disciplined balance sheet than the seniors, as seen by the data above.

But then why are senior gold producers outperforming the mid-tiers?

Created in 2009, GDXJ has become a big hit with gold stock investors. For years, it was a one click way to buy a basket of small and mid-tier gold exploration, development, and production companies. Investors reckoned that by holding GDXJ, they get “juice” on the upside, but not the downside risk associated with owning just one or two gold juniors. At one point this year, the fund had amassed more than $5 billion in assets.

This tremendous growth was a problem for VanEck. GDXJ grew too large to own many of the smaller stocks in its universe. GDXJ took in more cash than it could place in small and mid-tier gold stocks. Rather than turn money away, VanEck restructured the fund this year. It sold off some of its smaller holdings and expanded its universe to some larger gold stocks.

In a few cases, GDXJ owned up to 19.9% of many of the producing mid-tier companies. When the GDXJ decided to rebalance, it reduced its exposure in mid-tiers and increased exposure in senior gold names. The resulting selling pressure directly affected the share price of the mid-tier companies (in the short term).

Lesson: Know who the other shareholders of the company you invest in because their decision to sell can directly affect your portfolio.

P.S. In the July issue of Katusa’s Resource Opportunities, my team and I put together a watch list of oil companies to buy at alligator prices. The correction we foresaw in these companies is happening at a rapid rate which means they’re becoming very attractive. Subscribers will have the chance to buy these great companies at fantastic valuations. To come on board as a subscriber and get the names of these companies on our target list, click here.

Neither Katusa Research nor Marin Katusa own shares in the companies mentioned in this article.

No members of the Katusa Research Team have received any commission or other compensation to feature any company mentioned in this newsletter nor are they party to any financial arrangement regarding the securities of such companies or any person who has any interest in such securities. The information contained in this publication is not intended and does not constitute individual investment advice and is not designed to meet your personal financial or investment situation or needs. Neither Marin Katusa nor Katusa Research are registered broker-dealers or financial advisors. Never make an investment based solely on what you read in an online newsletter, including this newsletter, especially if the investment involves a small, thinly-traded company that is not well known. Past performance is not indicative of future results. You should independently investigate and fully understand all risks before investing. When investing in speculative stocks, it is possible to lose your entire investment. Information contained in such publications is obtained from public sources believed to be reliable, but its accuracy cannot be guaranteed. Further, the views expressed herein are of Katusa Research as of the date hereof, are subject to change and the Katusa Research Team does not undertake any obligation to update such information or views. None of the members of the Katusa Research Team shall be liable for any damages, losses, or costs of any kind or type arising out of or in any way connected with the use of this newsletter. The information in this publication reflects the current opinion of the publisher, is subject to change, and may become outdated. The publisher undertakes no obligation to update any such information.

Unauthorized Disclosure Prohibited. The information provided in this publication is private, privileged, and confidential information, licensed for your sole individual use as a subscriber. Katusa Research reserves all rights to the content of this publication and related materials. Forwarding, copying, disseminating, or distributing this report in whole or in part, including substantial quotation of any portion the publication or any release of specific investment recommendations, is strictly prohibited.