Connecting the China Syndrome with Bubbles 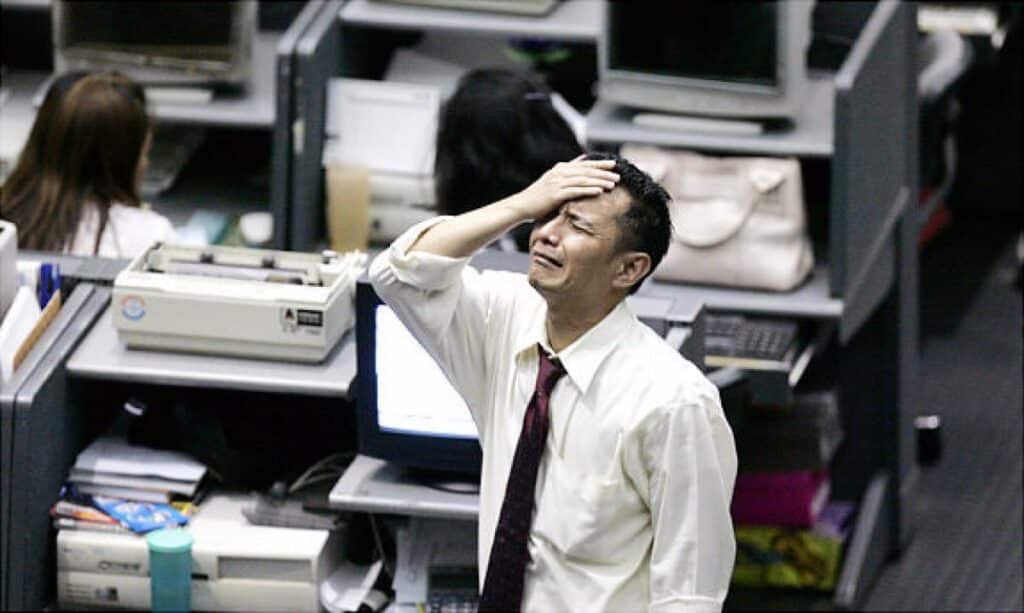 I regularly meet with investors in my hedge fund.  It’s fun.  Even though I am a very large investor in my own fund, I work for my investors.

I recently met with a large investor, with whom I meet once a quarter, to talk ideas and catch up.  He has made his millions in the resource sector and now resides in Beijing.

Our most recent meeting was the inspiration for this research project.

There is an old saying in the market that, “A bubble is invisible when you’re in it”.  He had the bug, but not a gold bug, full on, China syndrome for the Chinese stock market.

In fairness to my friend and investor, he did tell me, in fact he begged me to put some of my hedge funds cash into the Chinese markets a year ago.  Unfortunately, it’s not in the mandate of my fund, and I didn’t try to push it, as I like to play in a pond I know.

So, I spent my Sunday pondering if my friend and investor, whom I respect immensely, is onto a mega trend, or if he is just one of many who are suffering from the China Syndrome.

Is China in its Biggest Bubble yet?

The world’s largest fund manager, Ray Dalio, has said that the success of his $169 billion fund is partially attributable to history repeating itself and learning what went wrong. Well, there is currently a Chinese stock market boom very similar to past booms and we suggest investors take heed of Mr. Dalio’s advice. If the success of the world’s largest hedge fund rests on history, investors may want to pay close attention to our explanation of the Chinese stock rally. 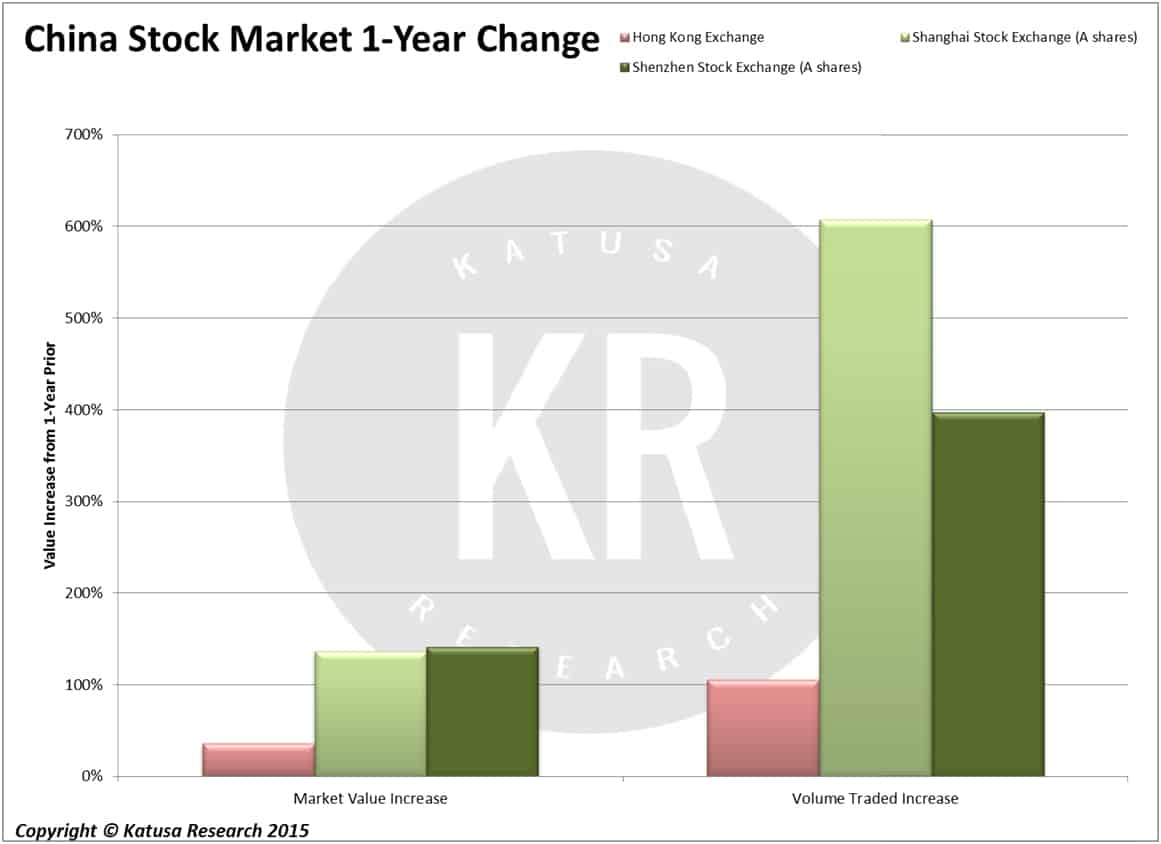 The performance of the Chinese stock market has been superb over the past year and that must mean that the Chinese economy is doing great, right?

China’s retail and industrial sector are seeing declining growth and housing prices continue to fall; meanwhile, the stock market has more than doubled over the past year. 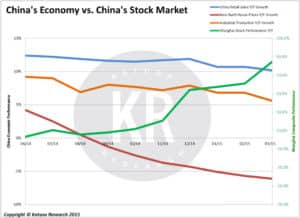 If the Chinese economy isn’t performing like its stock market, maybe outside factors are affecting its growth. Like its largest importer of goods: the US. Over the last year US stock market gains have been dwarfed by Chinese gains. 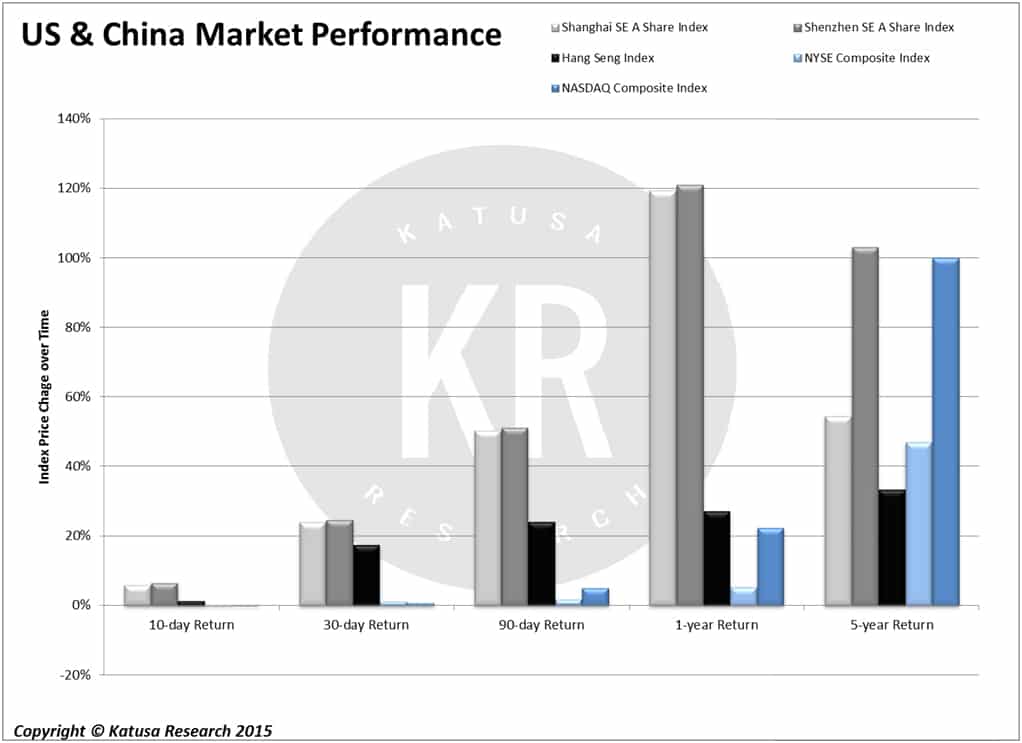 If the economic performance doesn’t justify the stock market rise, could we be in a bubble similar to the internet, housing, and European bond bubble?  Or might it mean something worse? 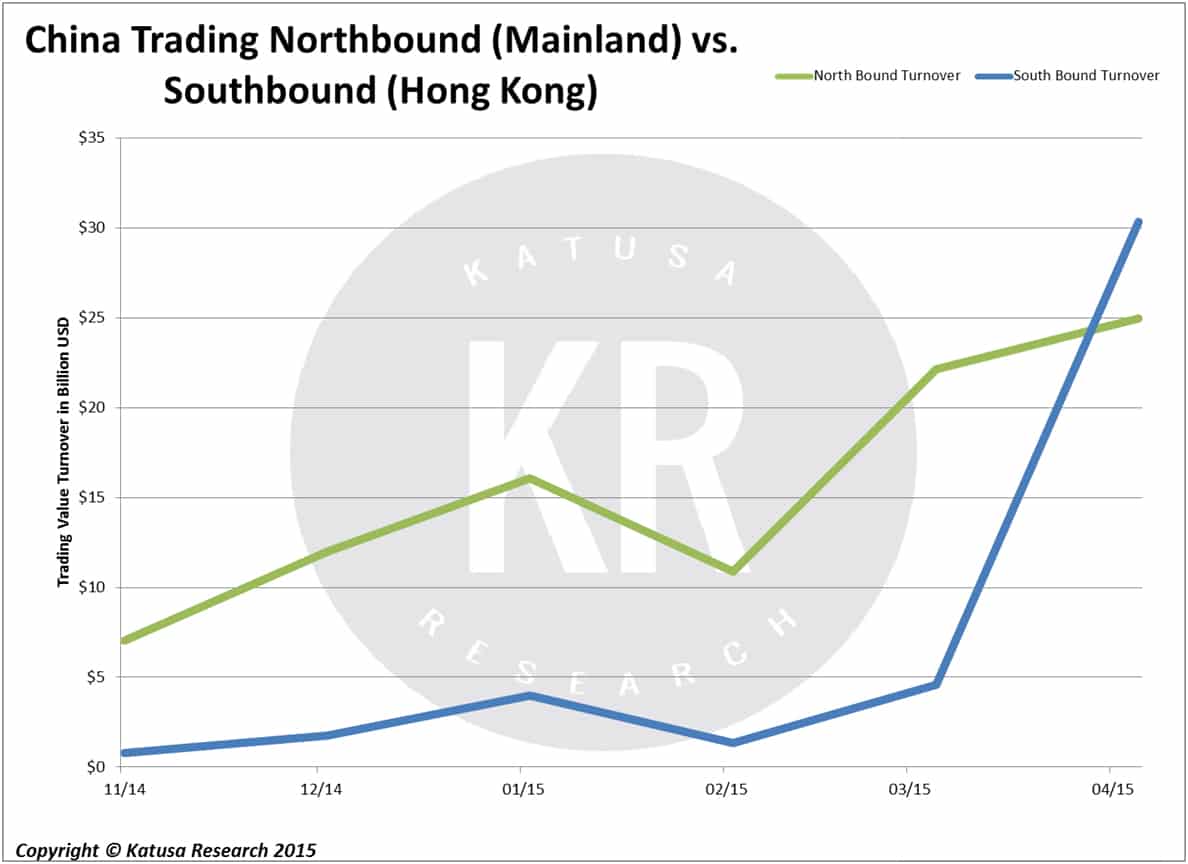 The beginnings of the Shanghai-Hong Kong Stock connect program caused a shopping spree by mainland Chinese investors inflating the market. In one year the Shenzhen Stock Exchange A shares’ price to earnings ratio doubled to a 50 times valuation; over 2x higher than the NYSE composite index.

The value between dual listed Chinese stocks on the Shanghai and Hong Kong exchanges has become distorted. This is partially attributable to more international investors in Hong Kong markets, as well as to less restrictions on balancing the market with short sellers who put downward pressure on stock prices. 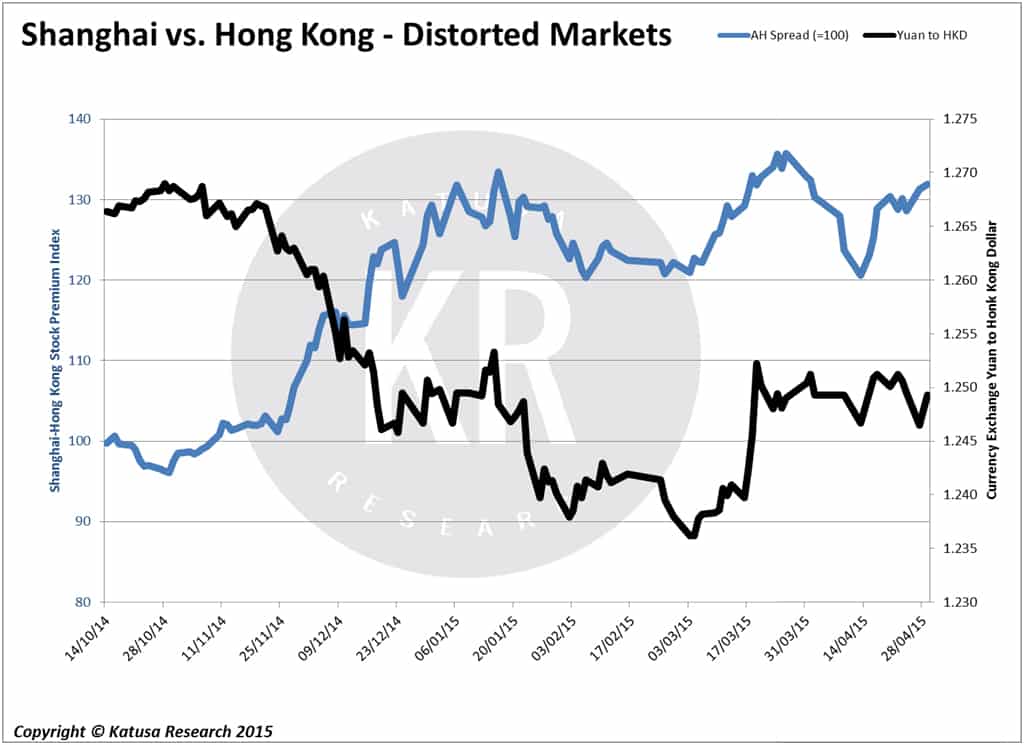 As of April the two distorted markets have caused more money to flow into Hong Kong markets, as mainland and international investors attempt to re-establish even pricing between dual listed companies at a record pace, filling the daily money flow quota restriction of $1.7 billion.

Money from Shanghai will flow to Hong Kong, and then expect the money to go offshore.  Vancouver housing prices is an example of what will happen elsewhere when wealthy Asians want to hide money outside of China. 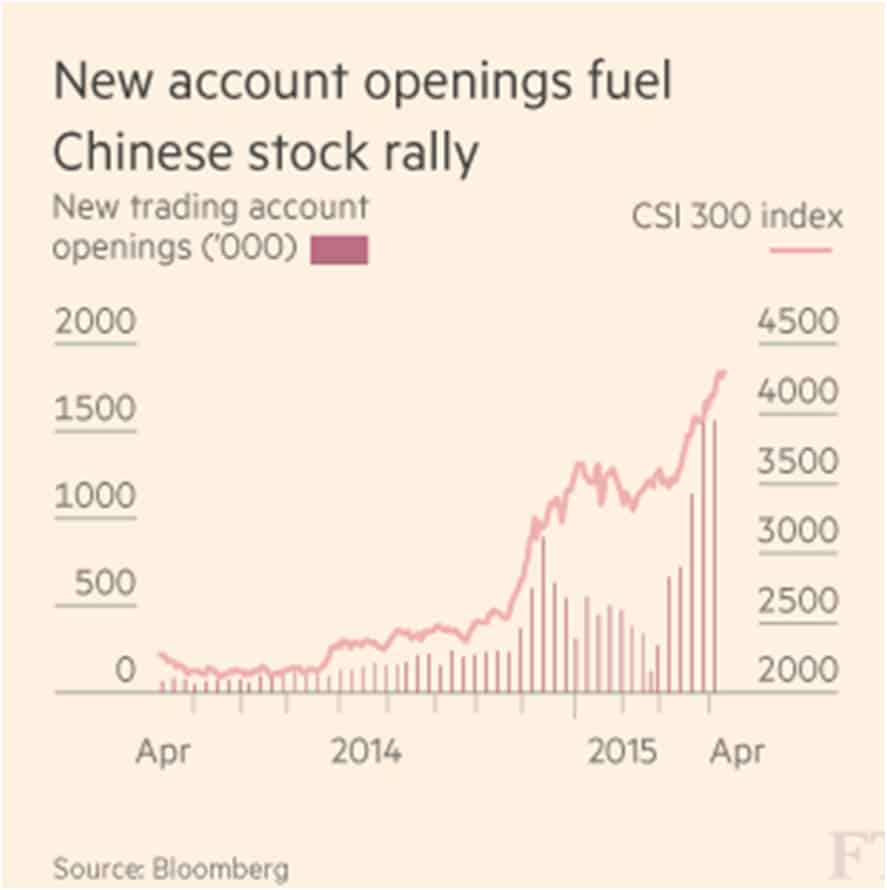 We all know about China’s One Child Policy.  There is no such Policy when it comes to brokerage accounts in China.  Mainland accounts are being opened by the millions every week, something I tweeted about a few weeks ago. More mainland Chinese are able to open several accounts each in order to maximize their involvement in the market.  And, if your first child is a girl (like mine is), you get to have another child, and both will eventually be allowed many brokerage accounts.  Ah, the magic of multiplicity.

Additionally, the Chinese government has reduced borrowing costs. We know where this is going…

Since announcing the Shanghai-Hong Kong stock connect program, the prime lending rate in China fell to 5.35% from 6% and lending to purchase stocks in China has exploded. China now uses over 3 times more leverage to borrow stocks on margin than the US.

Could there be more upside in China’s stock market?

But if you’re wondering whether you should participate in the Chinese rally, I suggest you take a look at what the big investors in the US have done thus far in 2015. 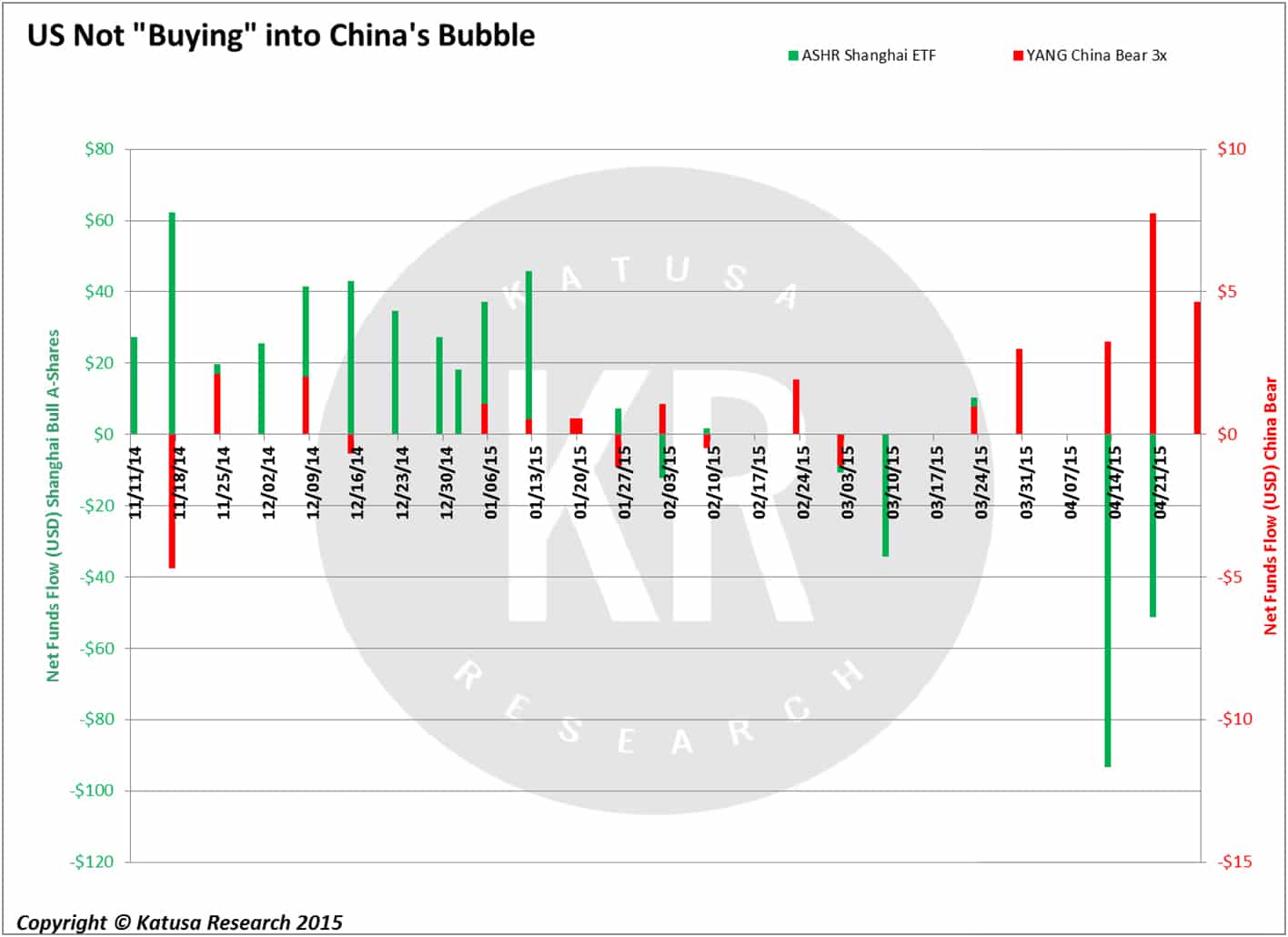 So, the big funds in the US aren’t buying the Chinese Miracle. 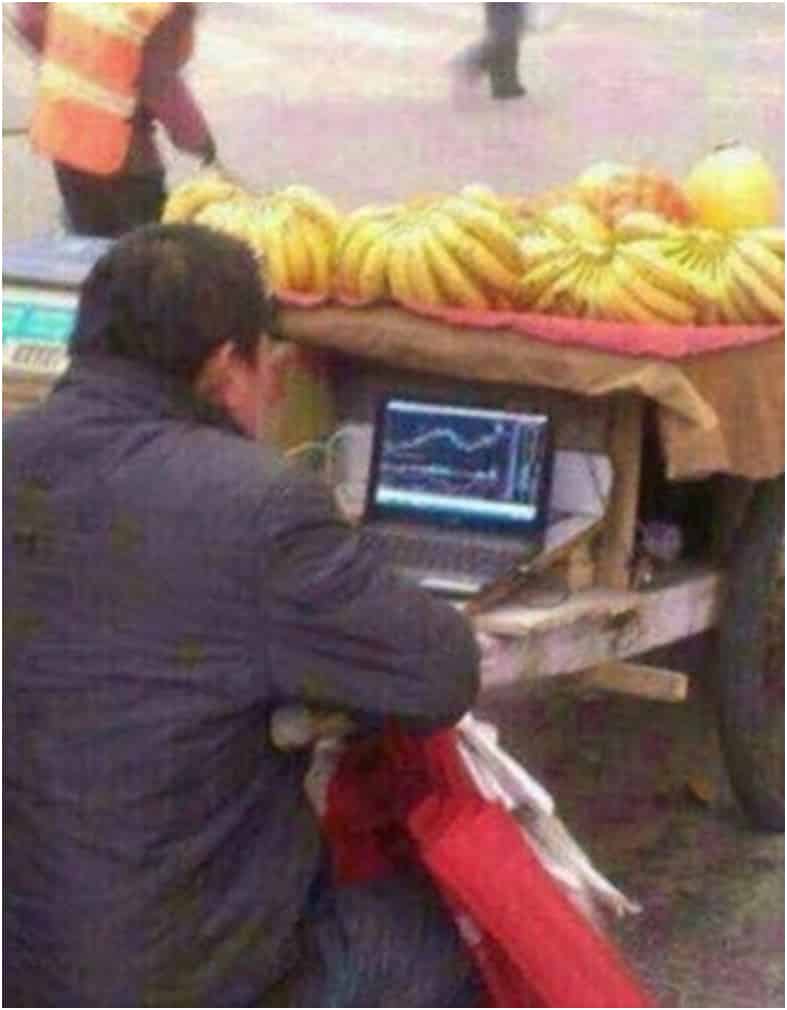 So, would you rather follow someone like a Ray Dalio who has decades of experience, or a Chinese retail investor who has never
really participated in the stock market. Now that everyone and their mothers (and street vendors selling bananas) are
participating in the Chinese market rally, US investors are wary of the sustainability of the Chinese Bull, or as the say in China, the Dragon. 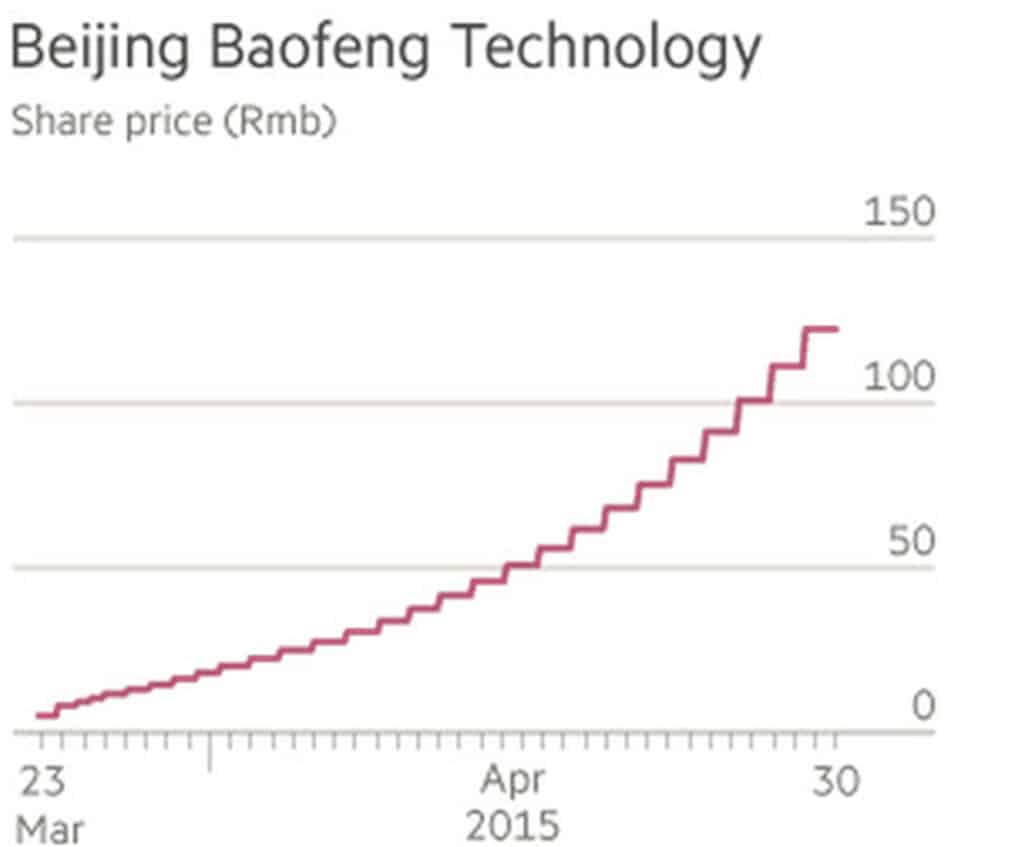 Am I being fair?  I hate to be a close-minded analyst, so I decided to compare some of the equivalent peers between China and North America.  I’m a numbers guy, and the numbers don’t lie (as long as the numbers are real).

So after running many screens and a lot of number crunching, the conclusion is inescapable: The “irrational exuberance” of the Shanghai and Shenzhen market has led to overvaluations relative to the US exchanges.

Taking all companies with a market capitalization over $12 billion USD, we see that US-listed companies are a much better investment on a relative valuation and yield comparison. Here is a chart you won’t see anywhere else.  I am breaking down sector by sector the comparable valuations. 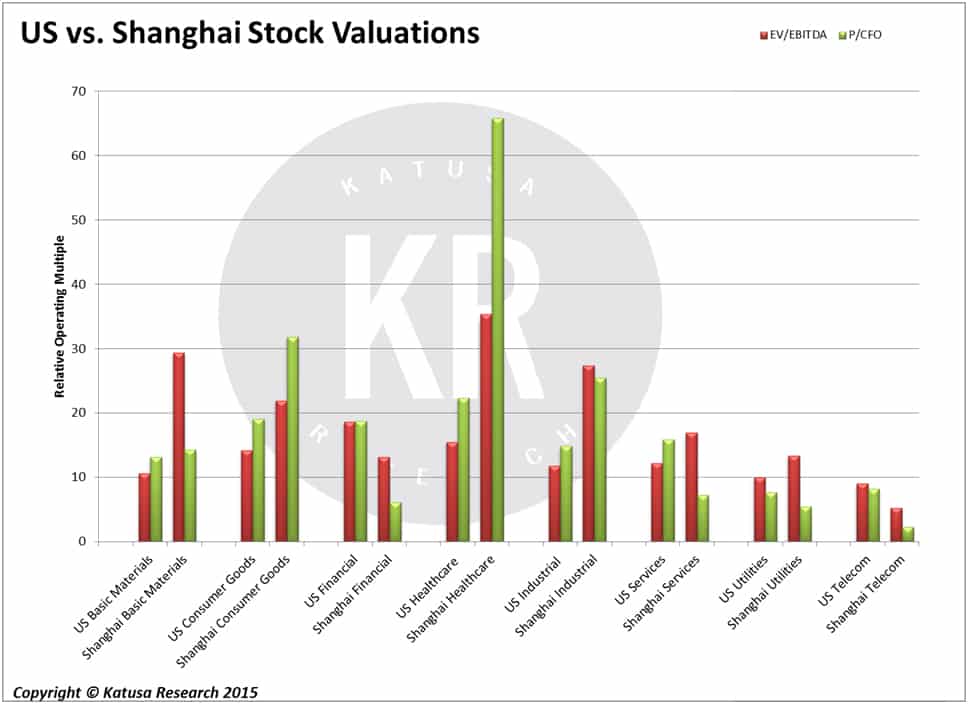 US Market vs. Chinese Market: Who Pays a Better Yield?

This was where the alarms start sounding to tell the Chinese Speculators: BUYER BEWARE.

In every single sector, the US companies pay a bigger yield than the Chinese.  This is not good. 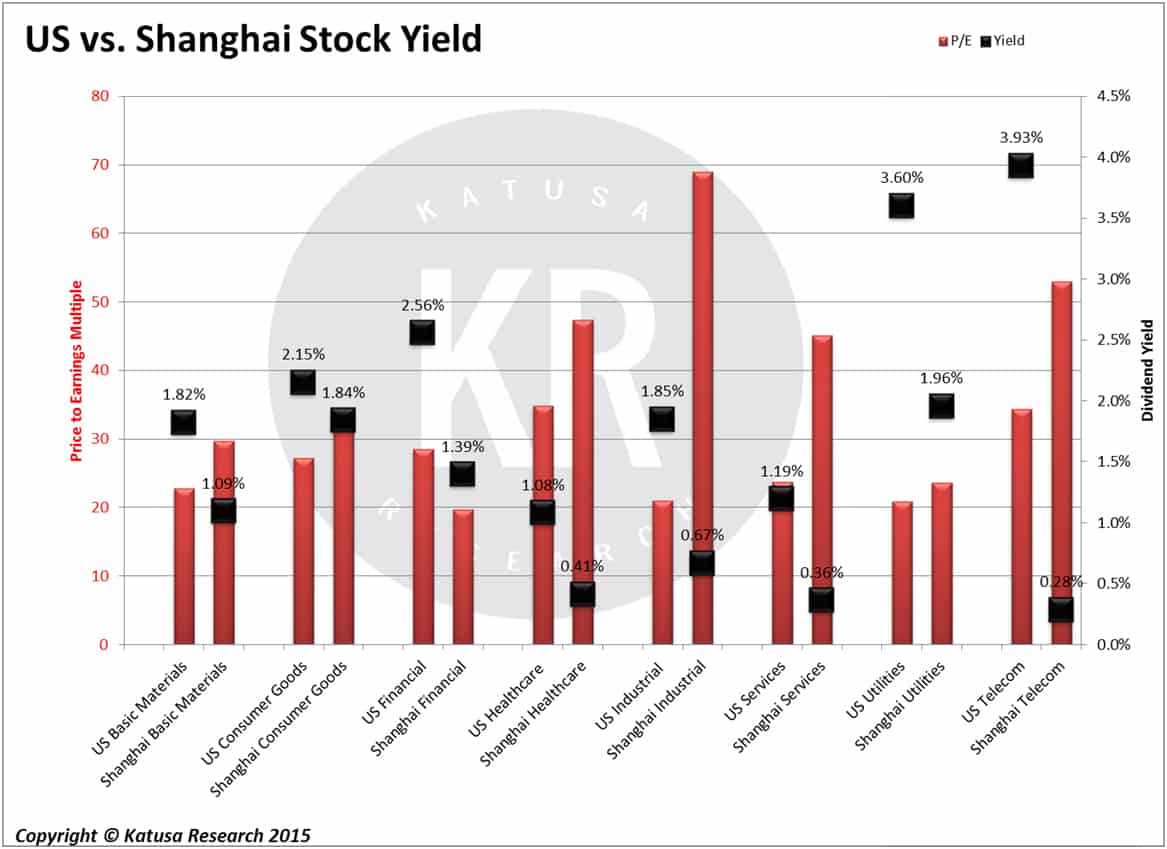 Chinese financial and telecom companies are the only ones that trade at a discount to US equities; however this comes with higher risk in Chinese financials and higher debt burdens on Chinese telecoms. Most US companies provide a much larger dividend yield. And I trust US accounting regulations more than their Chinese equivalent.

Alright, resources is where I have spent my whole career.  I was very curious to see how the Canadian peer group fared against its Chinese peers when it came to resources.

Conclusion:  Chinese resource companies trade at a significant premium to their Canadian counterparts.

The same hype of Chinese equities is reflected in the resource sector when compared to Canadian companies. Looking at all companies with positive operating income, the resources sector is highly overvalued in China relative to Canadian listed equities.  If I was a Chinese resource executive, I’d be on the warpath trying to buy Canadian assets with their overvalued Chinese stock paper.  Hmmm….Maybe this is a new trend to come… 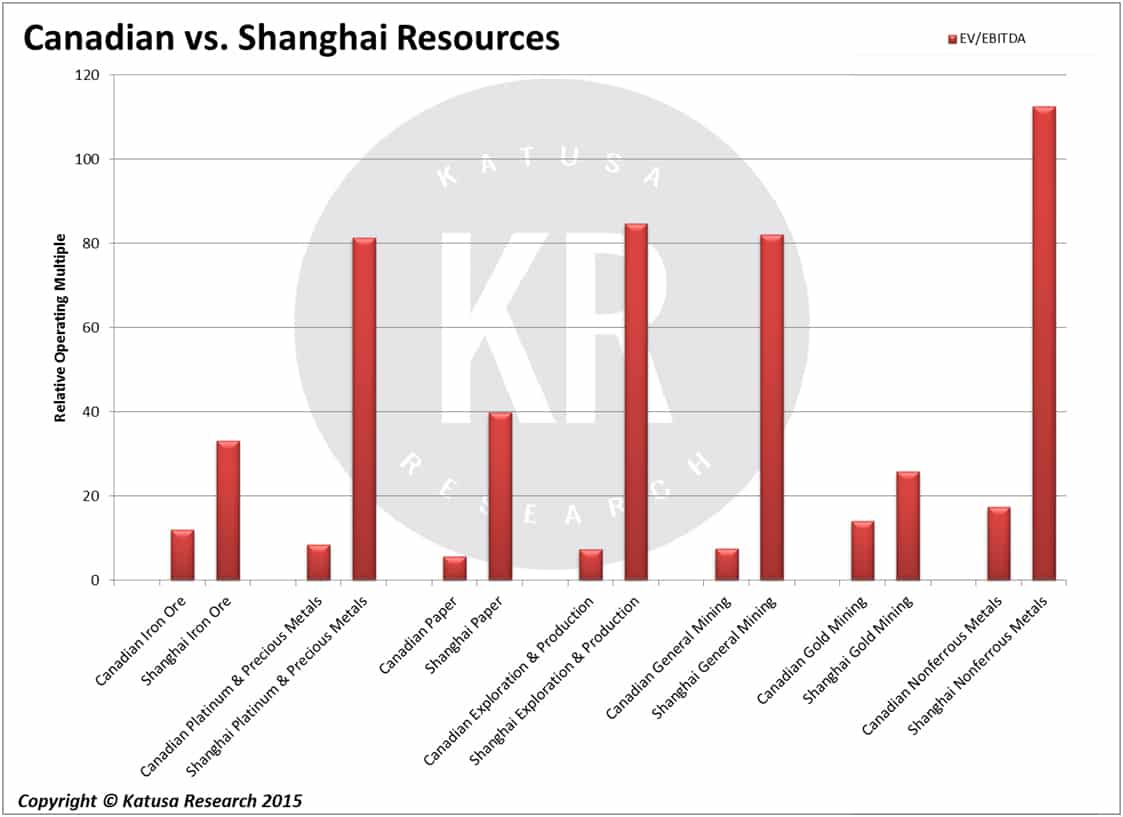 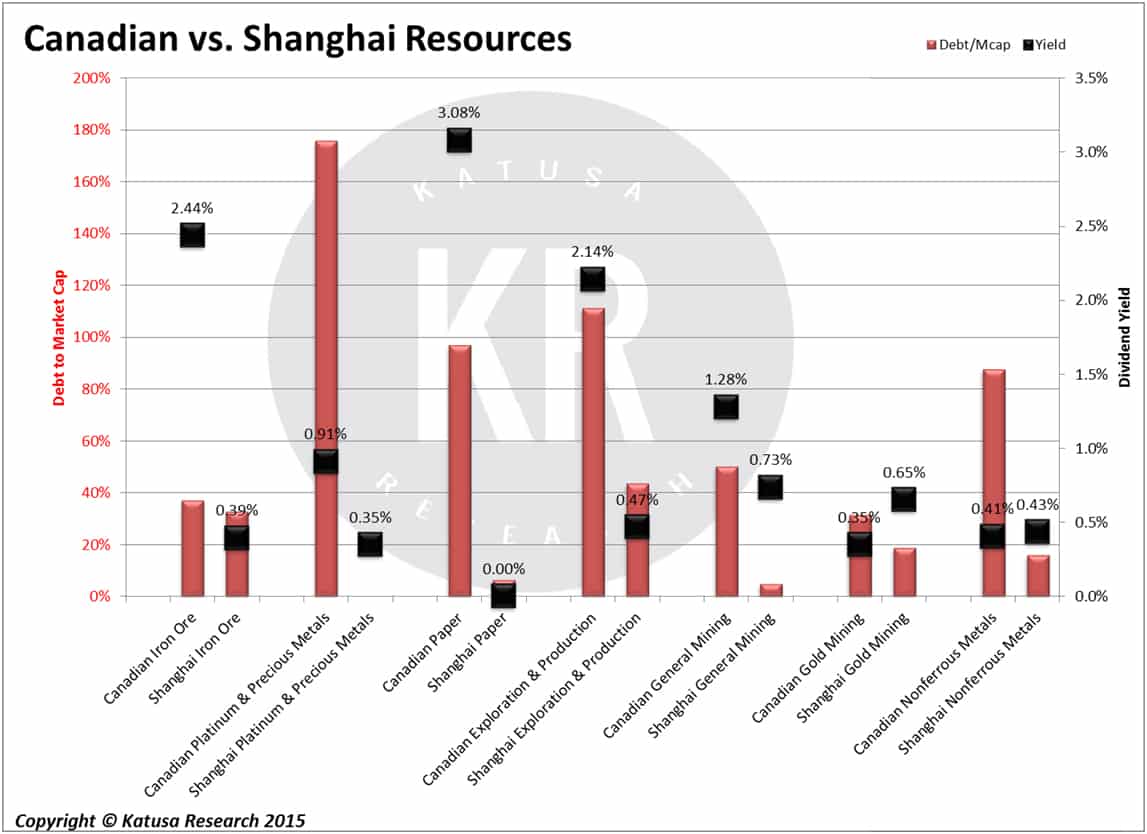 The value investor will have a tough time in the current euphoria in the Chinese stock markets.  I hope my Chinese friend has taken enough money off the table that he is now playing for fun. I know I would.