Historically, Australian gold stocks have traded at a discount to their North American peers. It’s been an odd phenomenon considering Australia is a safe, mining-friendly jurisdiction with a currency like Canada’s.

I have written extensively over the last 12 months about the Commonwealth takeover.

I’ve explained before how the Australian miners, buoyed by a weak Australian dollar and mining-friendly regulations, have been cash flow machines for the last 12 months.

The chart below shows the production profiles for the world’s major gold producers.

The Barrick-Randgold merger followed by the Newmont-Goldcorp merger are leaving the rest of the senior producers in the dust.

The chart below compares the newly formed Barrick Group versus a completed Newmont-Goldcorp and Newcrest Mining. It is evident that Newcrest is going to need to pick up the slack. 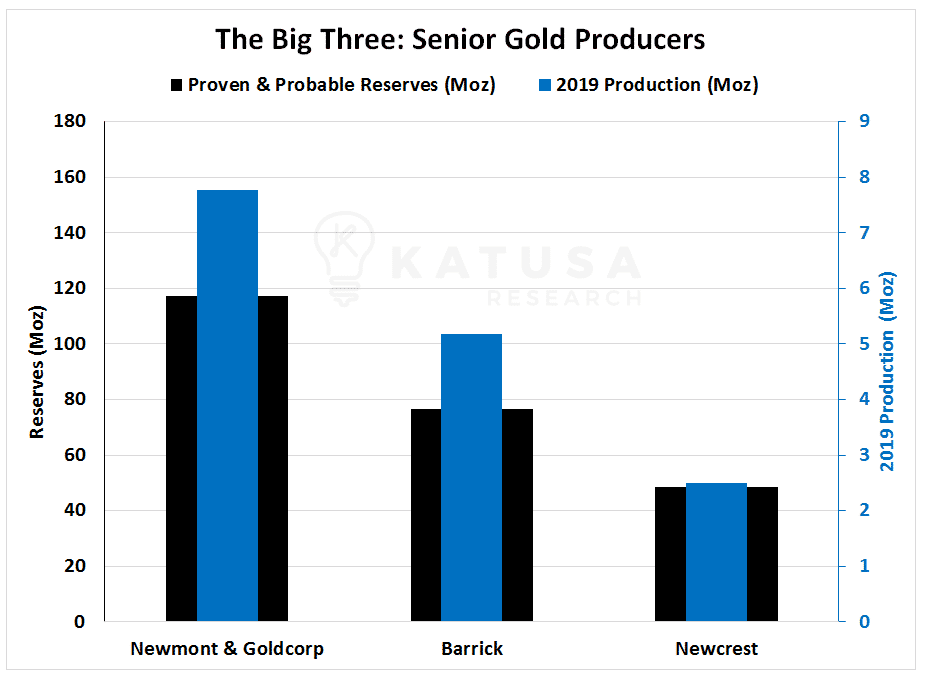 Newcrest needs to increase its production, and I don’t think they do that by merging with Agnico-Eagle or Kinross. The most cost-efficient way for Newcrest to increase production and reserves is to leverage its high share price in Australia and use it to buy a North American listed mid-tier producer like Pretium Resources (PVG:TSX) or perhaps even Detour Gold (DGC:TSX).

From a strategic standpoint, Newcrest should be looking at earlier stage non-producing assets such as GT Gold (GTT:TSX-V) in British Columbia, Canada which is close to their recent investment in Imperial Metals’ Red Chris Mine.

I believe there are two other large Australian gold producers who are looking for new assets.

The two other companies, both of which I met with at the recent conference in Toronto, are Northern Star Mining (NST:ASX) and Evolution Mining (EVN:ASX).

Northern Star recently acquired the giant Pogo deposit in Alaska. The management team of Northern Star are a group you want to pay attention to. Smart, young and aggressive, they are the future of mining.

I met with the original Japanese owners of the deposit, and they believe there is no further exploration upside. However, if I had to bet on who will get the better of that transaction, my money is on Northern Star.

If Northern Star is right, they paid an incredibly cheap price. But, if they don’t find any new ounces, they paid a fair market price for the remaining years of production from Sumitomo (a Japanese metals company). Overall a smart strategy by the team at Northern Star.

The chart below shows the fundamentals for Newcrest, Northern Star and Evolution Mining. 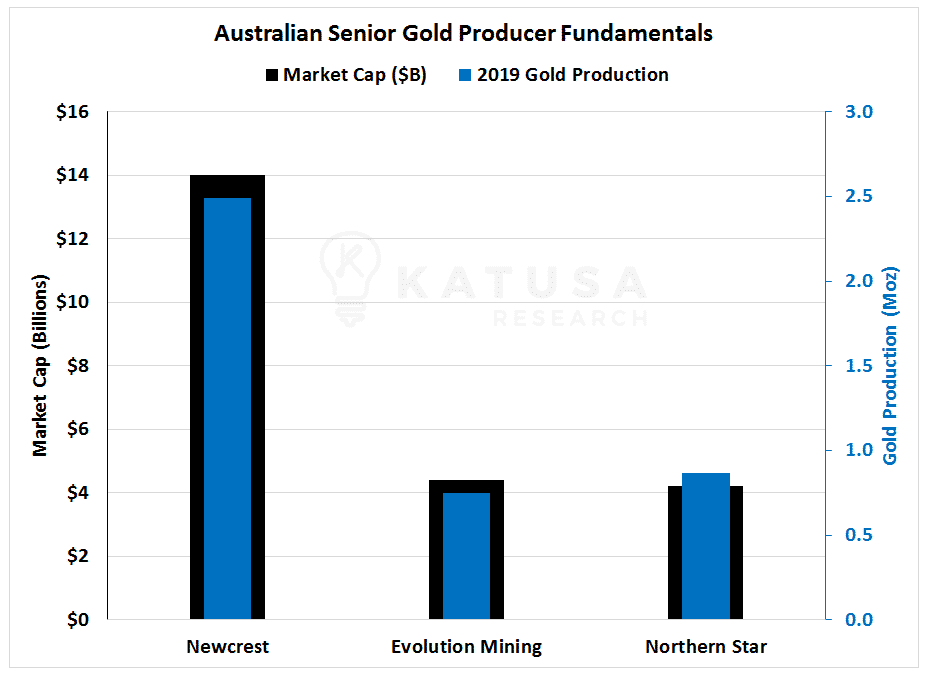 And below, you’ll find a chart which shows the reserves and the resources for the same three companies: 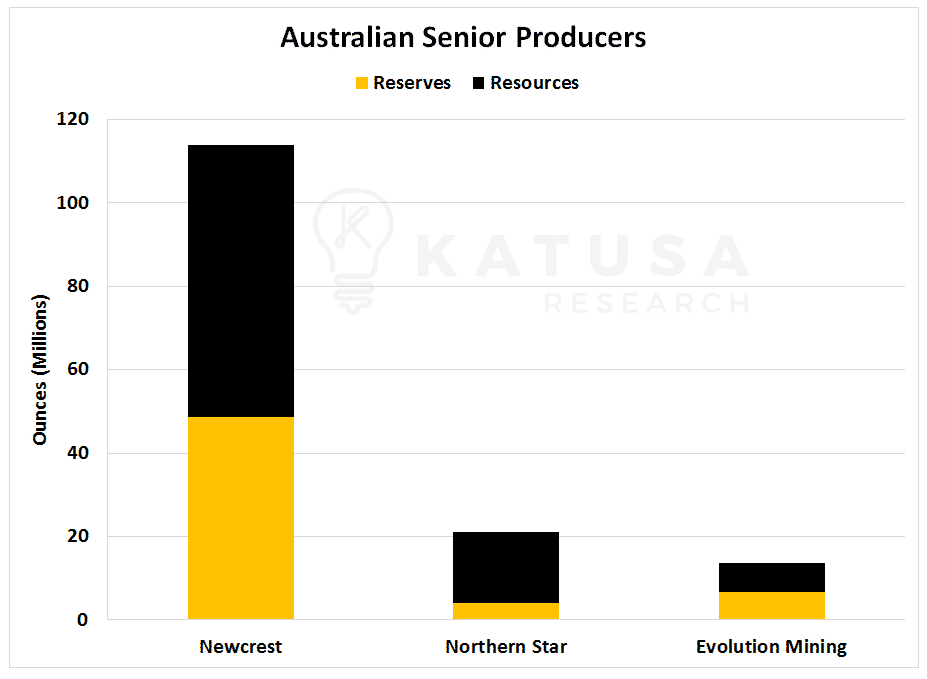 I believe the figures in the chart above are very understated. The Aussies use lower gold prices to value reserves in the ground than their North American peers do.

Think about it this way: If gold is $2,000 per ounce, lower grade ore can be mined economically because you need less gold extracted per tonne of rock to cover your costs. The opposite can be said if gold is $1,000.

Many engineers use $1,300 gold to design the “optimal” mine scenario. Which means that if gold is $1,200, the pit is designed incorrectly and material which should really be classified as low-grade or waste ore is actually sent to the processing facility.

This is inefficient and leads to higher costs and less gold production than expected. It also causes mine lives to appear to be longer than they really are.

The flip side of this is precisely what I think is happening in Australia.

Let’s take Northern Star as an example. They use a gold price of $1,071 to value their reserves. Evolution Mining uses an even lower price – $964 per ounce. This means their reserves and resources are underestimated. Their mine lives are longer than they appear, and their operations will be more efficient and lower cost as well.

That is a key reason why I became a significant shareholder in Newmarket Gold in 2015, which is now Kirkland Lake. Their crown jewel is the Fosterville gold mine. I noticed that the company was valuing its reserves using a gold price of $1,175 per ounce. Everyone thought the mine life was going to be very short, but mathematically, it was underestimated.

Because of the success of Fosterville, the price of Newmarket stock went from under CAD$1.00 per share when I first wrote it up in mid-2015 to Katusa subscribers to the present share price of CAD$42.20 per share.

Over the next 18 months there will be many asset sales, and these Aussie producers are going to be very active. All three will also be active in taking equity positions in non-producers – or at least I would be, if I were them.

Based on all of this, I’ve been actively looking for the best gold companies to put my money into. And I’ve narrowed the list down to 4 gold stocks that I see as prime takeover targets.

Subscribers to Katusa’s Resource Opportunities know exactly which companies I’m talking about. These are the ones I’ve put not only countless hours of my life into researching, but also millions of my own dollars into.

If you want to see which gold companies I’m holding in my personal portfolio and fund, consider signing up.

Disclosure: I do not own GT Gold.