HomeResearchMacroMarch is Critical for Commodity Markets and Coronavirus

Gold soared above $1,600 per ounce this week. The US dollar continues to remain ultra-strong and the US stock markets are at record highs.

The flight to safety is in full effect and Bernie Sanders hasn’t even won the Democratic nomination yet.

The major theme that has captured the global markets is the Coronavirus.

On February 17th, Apple warned of a sales shortfall for their Q2 reporting on the heels of the virus outbreak. When Apple’s results drop after their quarter ends in March, the markets will react.

As of this publishing, there are over 75,000 reported Coronavirus cases around the world. Given that the epicenter of the outbreak in China is under full lockdown, it’s safe to say that the number of cases is sure to soar higher.

If this is the calm before the storm – you’ll want to prepare with some crisis insurance. And judging by gold’s rise and the breakout of many gold stocks, many investors are taking notice.

Since the start of the outbreak, known gold ETF holdings have increased by over 2.7 million ounces. At today’s gold price, that’s $4.5 billion worth of bullion. 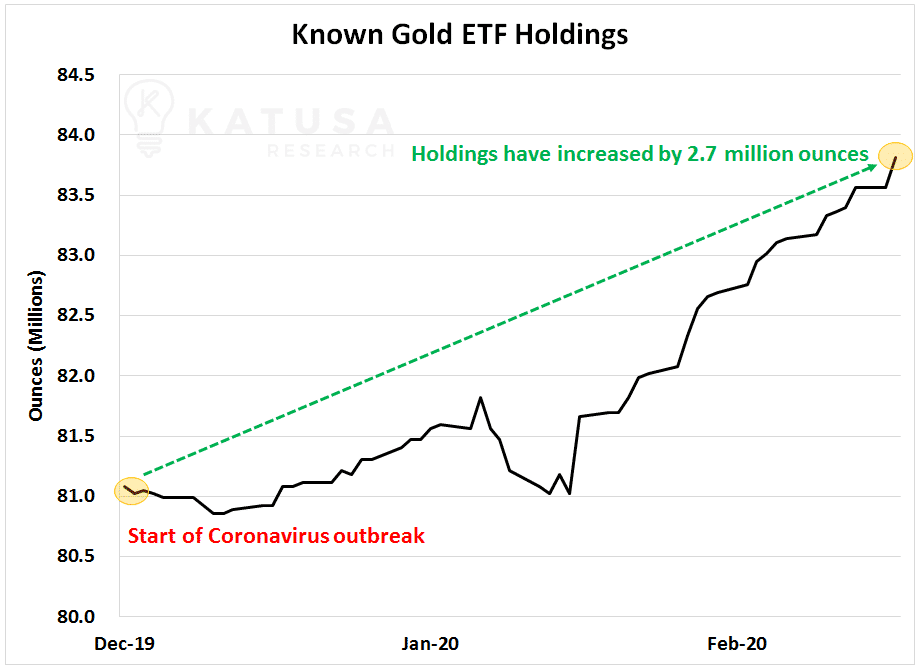 Fake news is almost the norm nowadays. I am sure your inbox and social media feeds are like mine, cluttered with a bunch of BS fear mongering types.

I’m going to share some real, tangible data with you…

First off, if you think people are back to work in China already, you’re in for a surprise. Not only that, but main tourist attractions in major cities are empty.

Just how big is the drop-off in traffic? Let’s take a look at motorists first.

Below is real time traffic pattern data for the last 7 days for major cities in China.

You’ll see the blue line is the average congestion for the day based on all data in 2019. The red line is the current conditions.

Below are the traffic conditions in Shanghai. For a city of 26 million people and home to China’s most important shipping port, there is very little traffic.

Next, you’ll see the last week’s traffic conditions in Shenzhen, the second largest shipping port in China. Shenzhen is one of China’s most important industrial cities with a population of over 12 million citizens. Again, traffic congestion is down significantly.

Finally, Guangzhou, a city of 13 million plus Chinese citizens and the 5th largest shipping port in China. Any lane is yours right now, no one is on the road.

Another way to show the total collapse in Chinese output is through electricity consumption.

Much of Chinese electricity production comes from coal generation. Below is a chart showing real time coal consumption. Levels for 2020 thus far are about 22% lower than normal. 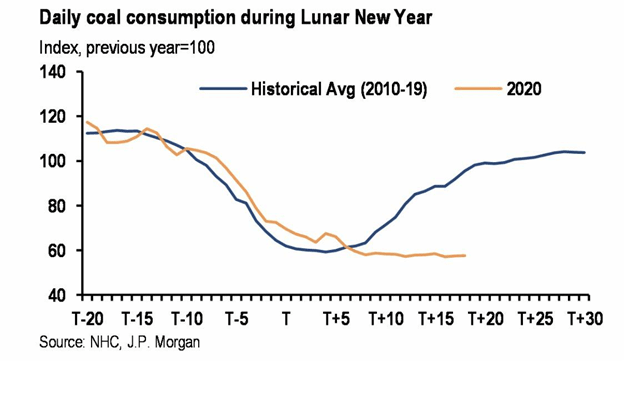 The Coronavirus Impact on Commodity Markets

The spillover to the commodity markets is not a minor blip. We are already starting to see large builds in stockpiles for industrial metals such as copper.

Below is a chart which shows the inventory level for copper in Shanghai.

I believe we are going to see inventory levels rise significantly over the coming weeks as businesses continue to sit idle.

Copper for sale in Shanghai trades at a premium to copper traded at the Comex in the United States or the Mercantile Exchange in London. And this premium has fallen to the lowest level of the year. This means there is a lot of copper supply domestically. 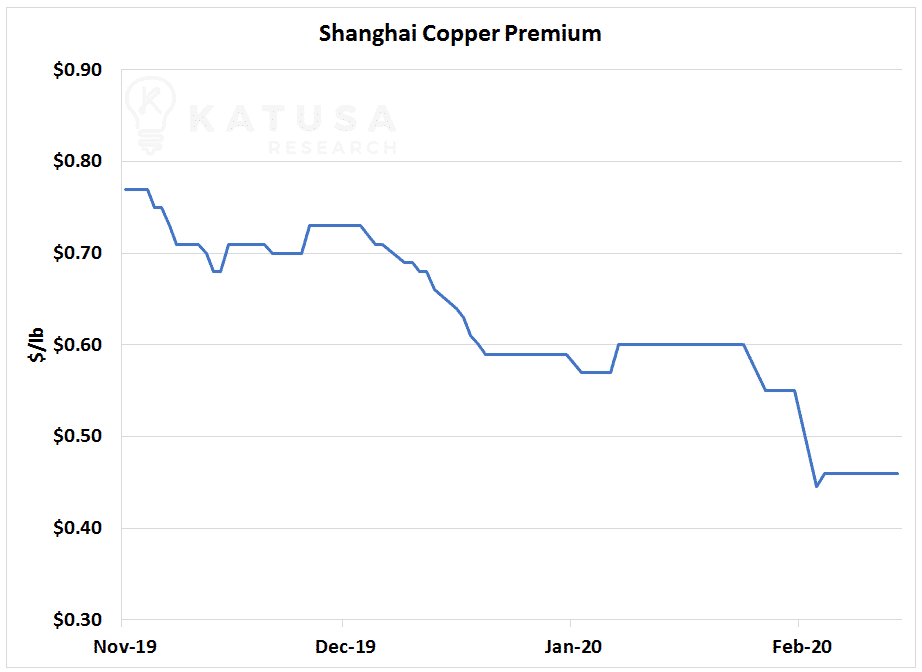 Our boots on the ground intelligence is telling us the worst is yet to come. The true impact of 780 million quarantined Chinese citizens is yet to be felt.

The Chinese manufacturing hub is the heartbeat of China and it’s flat lining right now. Cash reserves are surely dwindling across the board for Chinese businesses. Even Foxconn, the maker of Apple’s iPhones was reported to have slashed workers’ pay by one-third.

Subscribers to Katusa Research have been positioned exceptionally well and are capitalizing on the soaring gold price. Our core precious metals investments continue to hit all-time highs.

I’ve spent 2 decades using volatility and crises to my advantage and it’s paying off in spades right now. In the next issue of Katusa’s Resource Opportunities coming the first week of March (unless it needs to be published earlier for urgency), I am going to be detailing my next major idea to all my subscribers.

I believe there is a massive investment opportunity just ahead.

If you’re not yet a subscriber to my premium research, consider becoming one right here and get ahead of the crowd for the coming boom in commodities.

Based on historic bull markets, we’re still in the early innings of what could be a very rewarding trend. And I’m about to go big on three new positions, with subscribers having first access to my ideas at the same terms and prices.

Fortune favors the bold… and prepared.

P.S. We’ve just introduced the “Broker Challenge”. There are a lot of deals that come across our desks, screens and through our network. To all brokers out there with great deals, submit your ideas to Edward (edward@katusaresearch.com) and up to CAD$25,000,000 will be given to the broker, analyst or banker with the best idea. And all results will be published.