This week a nuclear bomb went off in the global energy market. The Russian Parliament is discussing banning all uranium trade with U.S. nuclear utilities.

I have written a lot about the American and Russian uranium dynamic in my NY Times Bestseller The Colder War. And as I stated in my book, the consequences from Russian actions to the U.S. utilities is catastrophic.

One in every five homes in the U.S. is powered by nuclear energy. Because of the low cost of uranium, the U.S. utilities have been buying the majority of their nuclear fuel in the spot market, not the long-term contract which was the historical norm. The U.S. utilities are now caught in a position of being undersupplied in terms of long term contracts. The only result will be higher spot uranium prices.

And if this ban does go through, uranium investors that have their money with the right companies are positioned to profit from the situation.

So here’s what you need to know…

The U.S. imports 6.3 million pounds of uranium per year from Russia. This makes up 14% of U.S. demand. Kazakhstan (a former Soviet State and whose uranium is enriched by the Russians) provides 24% of U.S. uranium imports, to the tune of 10.8 million pounds.

In the chart below, you’ll see the breakdown showing what countries the United States gets its uranium from. 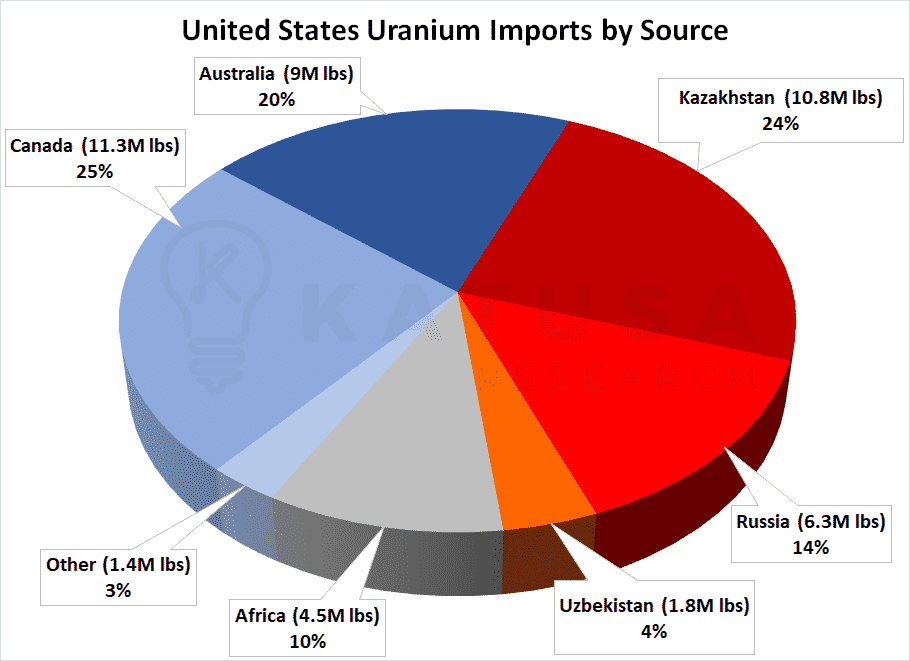 Another major issue the utilities will face is the source of enriched uranium (which the nuclear power plants can consume). Uranium is “enriched” by converting uranium oxide from the mine site to uranium hexafluoride via a conversion plant.

Unfortunately for the U.S., local utilities are left exposed in a negative way. All U.S. domestic enrichment facilities have been closed due to poor economic conditions. In other words, they were losing money.

The only non-Russian source of enriched uranium to the U.S. currently comes from URENCO (an operator of uranium enrichment facilities). URENCO is a complicated joint venture (JV) between the British and Dutch governments and a consortium of German utilities.

The French do have capacity but have a policy of enriching their own material. Russia has positioned itself in the center of the chessboard, and controls 45% of the global enrichment capacity.

If the domestic U.S. nuclear utilities had any common sense, they would go to existing permitted U.S. production companies and sign long term offtakes to provide for the feed for the U.S. domestic enrichment facilities.

These utilities do have common sense, and a doubling of the spot price from the current USD$20/lb to $40/lb would increase the electricity generation cost by less than 10%. The absolute critical factor for nuclear reactors is to stay online.

I believe the spot price of uranium will have to increase to meet the demand of the nuclear reactors.

Combine the Russian geopolitical issue with the Japanese reactors slowly coming online, and you will see the spot price of uranium start its uptrend.

The nuclear utilities don’t really care whether uranium is $20 or $40 per pound because once a reactor is up and running, the price of uranium makes up less than 3% of the operating costs. Unlike natural gas or coal which make up over 35% of the final cost.

The only thing that matters for the nuclear facilities is to lock in a stable source of long term supplies.

I know this because I was asked to give the 2015 Keynote address at the 2015 World Nuclear Fuels Market conference in Paris.  This was not an investors conference.  It was where the producers, traders and utilities all met to cut deals to buy and sell uranium.

The Russians are Coming…

Don’t underestimate the Russians ability to fight back at the U.S. sanctions. From my sources, I am told the Russians are already locking in long term contracts with the Chinese and other emerging markets that have increased their nuclear power generation.

But at the same time, expect trigger responses via Twitter by President Trump. This will only fuel the volatility in the uranium sector.

In the Katusa’s Resource Opportunities portfolio, we are exposed to what I believe is the best way to benefit from the coming geopolitical risk in the uranium sector.

In the Room, In the Know

At the World Nuclear Fuel Cycle Conference in Spain this week (like the one I gave the keynote address in Paris in 2015), the following was the talk of the conference.

My contacts there have stated to me personally that the buyers have already been locking in uranium purchase contracts at higher prices than the reported spot price.

***Note to regulators — This is not material non-public information. Everyone at the nuclear fuel conference knows about this—and I am relaying this information to my readers before the media gets to the info. That is what my readers expect — bring the best information in a timely manner***

In the coming weeks, all of this information will make its rounds through Wall Street and I expect select uranium companies to be the beneficiaries of the flow of capital into the uranium sector.

To find out where your speculation dollars should be, you will need to subscribe. But my subscribers are already sitting on nice gains from this play, and I expect them to go a lot higher.

The Cure for Low Prices…

Seasoned resource investors know that one of the ultimate signs of a market bottom is when the current market price of a commodity is lower than an industry’s lowest quartile cost of production.

When this situation occurs, either the price of the commodity goes up or the producers go out of business. And the world goes on without the commodity. In the case of the energy markets, the world will always choose to keep the lights on.

That’s why the saying goes, “The cure for low prices is low prices.”

In the case of uranium, the average all-in production cost of existing, permitted, U.S. conventional uranium mining is about $50-60 per pound. This is an “all-in” cost that takes into account the cost of capital, labor, equipment, fuel, and insurance. The highest grade uranium project in the world, the McArthur River project in Canada, needs about $30-35 uranium to break even. Kazakhstan’s ISR projects needs $30 uranium to be economic.

If you’re following closely, you should be asking. “Why is the spot price about $10 lower than the cost of production for the best uranium mines on the planet? Are these miners losing money on each pound of uranium?”

Here’s what you need to know…

Uranium is sold in two ways.

One is through the spot market. This is where an end user can buy uranium now.

The second is through the long-term contract market. This is where end users enter into agreements with producers to buy set amounts of uranium over set periods of time.

In mid-2017, the spot price of uranium traded below $20 per pound. At the same time, the long-term contract price was about $32.50 per pound. Historically, the majority of sales have been in the long-term market, but that has changed since Fukushima.

Because of the flood of Japanese stockpiles, the spot market became more active. But that is now starting to change. This anomaly appears to have started to reverse, which is good news for the price of uranium. Both prices are well below the industry’s average cost of production.

Eventually, the laws of capitalism will exert themselves.

If the Russians bring in a law not to sell uranium to the U.S., neither Canada nor Australia can make up the difference at current prices.

As a result, the price of uranium must rise or the lights will go off.

The cost of 1 out of 5 homes losing power is far greater than the uranium price doubling or even tripling.

The lights will stay on. How else will trump be able to Tweet?

But, a transition from bear market to bull market won’t happen overnight. Nor will all uranium companies benefit. There are over 50 uranium companies listed on North American exchanges, so please don’t go throwing darts at the board.

You must know where to make your bets.

I will also put up my uranium track record over the last 15 years with any analyst or newsletter writer in the business. I don’t know of any other writer or analyst that was asked to give the keynote to the nuclear fuel market conferences. Not to sound brash, but it’s the truth.

Uranium bulls, pay attention: There is still supply overhang that will get worked through.

But demand is surging. Supplies are just starting to curtail. We’re seeing this happen already in Kazakhstan. And the industry’s production costs are much higher than current spot prices.

I’ve mentioned a couple of factors that could send uranium prices 100%-500% higher this year.

Since natural resource stocks are leveraged to commodity prices, deeply depressed uranium stocks could climb five-fold during that time.

You might think these projections sound outlandish, but they are actually very conservative. 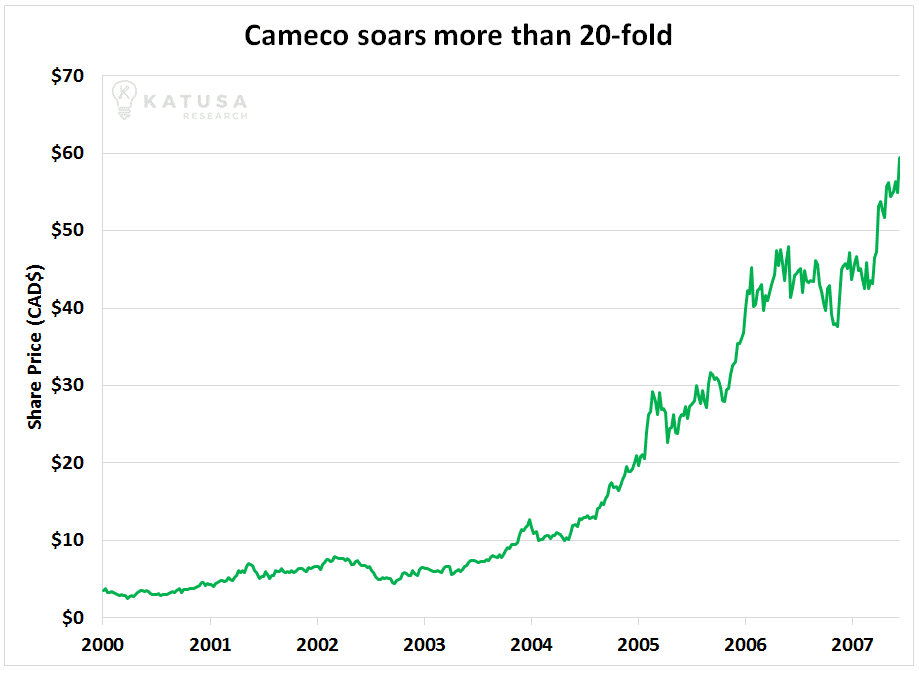 Uranium enjoyed that remarkable bull market for several reasons. Supply was constrained, demand was healthy, and fund managers were speculating that the end of the HEU agreement (Russian Highly Enriched Uranium ‘Megatons to Megawatts’ program where Russia sold its uranium from old nuclear warheads to the U.S) would further constrain supply.

That’s the situation we have now as well.

P.S. My subscribers have enjoyed two quick swing trades on a low-risk uranium producer that netted double-digit returns on two separate trades. One of those trades took less than 10 days to come to fruition. We are currently long two of the best uranium stocks, run by the right people, with the right projects and balance sheets. To find out which uranium companies I’m investing in, consider becoming a member to Katusa’s Resource Opportunities right here.