Saudi Aramco – A Peek into the World’s Most Valuable Company

What company made more profit last year than Exxon, Apple, Amazon and Facebook combined? Is it General Electric, Ford or Canopy Growth? No – it’s Saudi Aramco.

Over the last several years, Saudi Aramco has been responsible for 1 out of 8 barrels of oil consumed worldwide. That’s a lot of oil production considering global oil demand is 100 million barrels per day.

I think you’d agree with me that given those 2 previous statements, this company is one of the most important businesses operating in the world today.

Only the secrecy of the Rothchild’s wealth supersedes the mystery and ambiguity of the oil reserves of Saudi Aramco. For decades, the financial performance and oil reserves have been one of the company’s best kept secrets. That data was limited to a tiny circle of executives and government officials.

Now, thanks to a corporate bond offering, audited financial statements and verified hydrocarbon reserves… that data has been released.

I’ve followed Saudi Arabia and Saudi Aramco for years. In 2016, I wrote a piece stating that the new Saudi King, Mohammed bin Salman, would be a game changer for the country.

In my New York Times Bestseller, The Colder War I wrote a whole chapter on Saudi Aramco. Let me condense it down to a simple short essay.

In 1933 when a Concession Agreement was signed between Saudi Arabia and the Standard Oil Company of California (now Exxon Mobil), Saudi Aramco was formed. Over the following decades, the Saudis and their partners would grow the business into the world’s largest oil business and the world’s most profitable company.

The company operates one of the world’s largest refining businesses, with net throughput of 3.7 million barrels per day.

The largest refinery in North America is not “Buy American”, but rather a Saudi Aramco owned refinery.

You can’t make this stuff up.

Yes, you’re reading that right, the largest oil refinery in North America is owned by Saudi Arabia. It’s the Motiva refinery in Port Arthur, Texas. And it has refining capacity of 635,000 barrels per day. Motiva was originally owned through a joint-venture with Shell. But the Saudis acquired 100% of the operation in 2017.

Do not bet against the Saudi King Mohammed bin Salman or against Saudi Aramco.

How Much Oil Does Saudi Aramco Produce?

Saudi Aramco is by far the largest oil producing company in the world. Below is a chart which compares Saudi Aramco’s production to the other super majors. 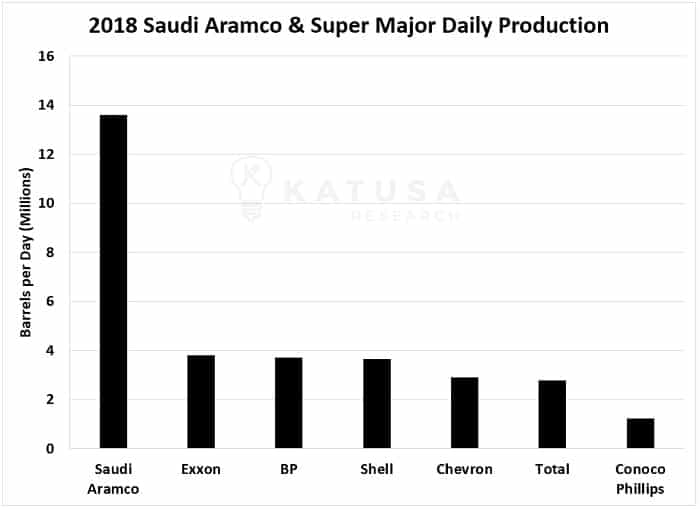 How Close are the Saudis to Running Out of Oil?

Contrary to many articles and pieces of research I’ve read, the short answer is not even close.

Below you’ll see the proven reserves remaining for each of the key Saudi Aramco fields and the Reserve Life (Proven Reserves ÷ Production) for each field.

According to the reserve report released by third-party petroleum engineers, on December 31st 2018, more than 80% of the Kingdom’s proved crude oil reserves were in hydrocarbon reservoirs that were less than 40% depleted. 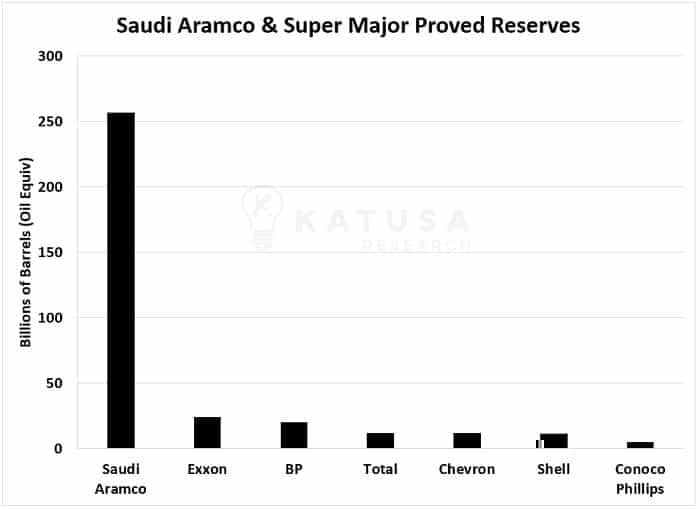 What are Saudi Aramco’s Production Costs?

Blessed with world class hydrocarbon reservoirs, the Saudis produce barrels of oil at a fraction of the cost of the rest of the world’s largest oil companies.

Below you will see Saudi Aramco’s dominance in lifting costs when compared to the other super majors. 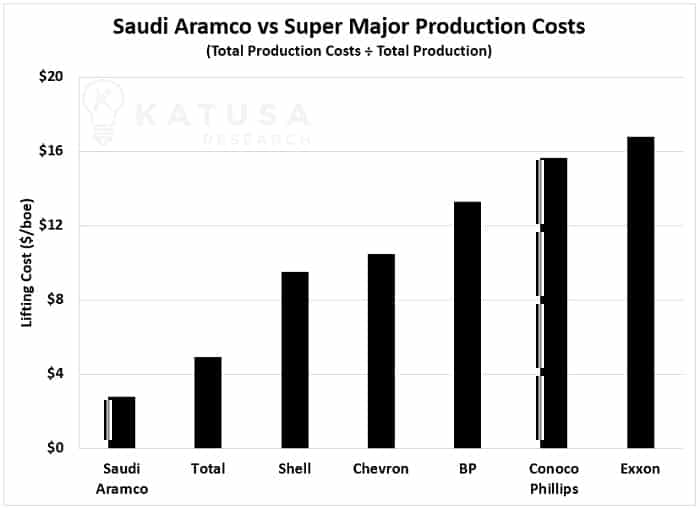 For further comparison, Saudi Aramco has far lower lifting costs than even the most efficient and largest U.S. shale producers. Below is a chart which compares Saudi Aramco’s production costs to large U.S. shale oil producers. 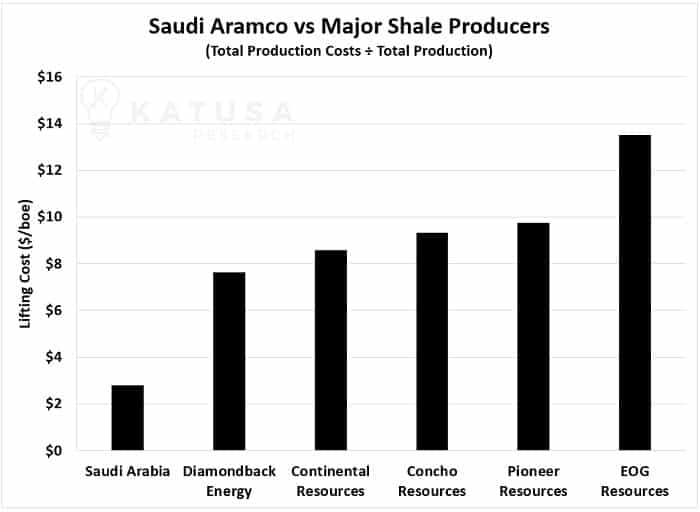 Remember the whole “War on Shale” the media was babbling about in 2014-2016?  Don’t bet against Saudi Aramco – you will lose.

I’ve read so many nonsense and ill-advised conspiracy nut job pieces on Peak Oil. There is no Peak Oil.

The release of audited financials and reserves should silence a lot of critics of Saudi Aramco. For years there have been many “experts” suggesting that the Saudi fields were depleted, and that the Saudis didn’t really have low cost production. This report suggests otherwise. And as per usual, Saudi Aramco is one step ahead of the herd.

Just as I stated in January 2016, I will say it again: Do not bet against MBS—you will lose. The futures for Saudi Aramco and MBS look very bright, even at $45 oil. And even brighter at $55 oil. And incredibly bright and powerful at $65 per barrel or higher.

The oil markets are very dynamic and ever changing. It may surprise you that oil is the best performer out of any major commodity this year. It’s never been more crucial to be up to date.

My team and I spend hours every week monitoring all corners of the oil sector. If you don’t want to spend countless hours grinding through due diligence on your own, Katusa’s Resource Opportunities members get access to the best of my research every month.

For a taste, check out some of my free oil market research like our Oil Stock Value Monitor, in our Market Intelligence Center.