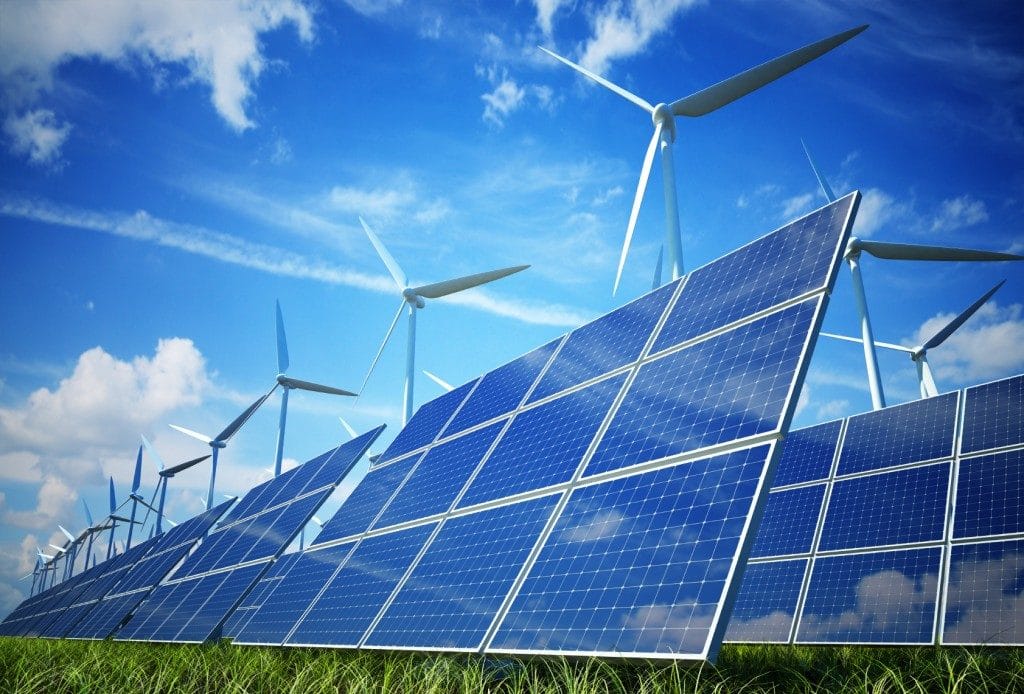 Almost daily, it seems there is a new headline about the bond market. PIMCO is selling, PIMCO is buying, PIMCO is unsure. It is beyond repetitive at this point. But one thing is certain: an enormous bull market for some particular bonds has developed in the energy sector.

Fear not, I am not here to pump the high yield, distressed debt instruments of the Oil & Gas sector. Such “energy bonds” are riskier than the private placements I structure with micro-cap companies. And those PPs carry full 5-year warrants.

The market I am talking about is in the power generation sector, and more specifically its renewable power segment. Clean energy investments have topped US $250 billion in each of the past 5 years and exceeded $300 billion twice. They focus not only on hydro, solar, wind and geothermal, but also on energy efficiency. New builds, add-ons, acquisitions—all are driving this raging bull.

To further demonstrate that there’s a big change afoot, consider the “World Energy Outlook” provided by the IEA. It states that, for only the second time in 40 years, global GDP outgrew greenhouse gas emissions on a percentage basis. Furthermore, renewables accounted for nearly half of the new power generation capacity that came online in 2014. Every country around the world has a plan to reduce emissions and investing in the companies that support such a plan only makes sense. I’m with the smart money, which is saying, “if we can profit and save the world at the same time, what’s not to like?”

The Bloomberg New Energy Finance team recently put out a special report projecting the action in renewable technologies out to 2040. Investment in the sector during the next two and a half decades will be $8 trillion, Bloomberg estimates, with 78% of that capital being deployed in developing countries. Renewables will command just over 60% of the nearly 10,000GW in new generating capacity to be installed over the next 25 years.

A major driver in the push for renewable power generation is “learning curve steepness.” That is, as more time is spent developing the tech, costs come down exponentially. Big reductions have already been realized, especially in solar, and more are coming, across the board. This contrasts sharply with the situation as recently as a decade ago. Initially, costs for renewable generation were extremely high, and that made such projects uneconomic unless they were heavily subsidized by the government. By 2040, however, the all-in costs for wind will be down an additional 30% on average, while solar will be down by 48%. Forecasts hold that as soon as 2030, it will be cheaper to produce power with wind or solar than it is with coal or gas—anywhere in the world.

Below is a snapshot from my Bloomberg terminal of the per megawatt hour costs for each renewable technology. The data in the legend represents the Q4/14 levelized cost of electricity for each power generation type listed in the chart.

The “Levelized Cost of Energy” is a convenient summary measure of the overall competiveness of different generating technologies. It represents the per-watt cost—in real dollars—of building and operating a generating plant over an assumed financial life and duty cycle. Key inputs to calculating LCOE include capital costs, fuel costs, fixed and variable operations and maintenance costs, financing costs, and an assumed utilization rate for each plant type.

With the declines in costs of energy production from renewable sources, one can easily envision the transition away from fossil fuels and into renewables. In addition, the move is encouraged by government standards such as MATS and other emission controls that make it more expensive to use coal as an energy source. Mandated carbon capture systems (CCS) for coal fired plants will add a projected $50/MWh by 2020, according to the EIA.

The overall trend is perfectly illustrated by these two charts:

Development of new capacity is heavily skewed to areas outside the Americas and OECD. Developing non-OECD countries must build nearly 3000GW of capacity a year to satisfy power demand, and that will lead to an estimated $370 billion per year in green energy investments on their part.

Deflationary signals—such as rapid devaluation of other currencies against the USD and falling commodity prices—have been plentiful over the last year, as I have noted numerous times. Evidently, the major private equity and sovereign wealth funds have also taken notice and share my views, as you’ll see in a moment.

In our deflationary environment, the best protection is a fixed income stream denominated in the non-depreciating currency, in this case the USD. This is most safely achieved via a coupon payment in which the debt is backed by a producing asset. Given this thesis, one can see why the green energy bond market is so strong.

But there’s more to the story. Unlike other forms of energy generation which have a finite life span, the electricity from hydro, wind, solar and geothermal power plants is essentially infinite. And their cash flows are also essentially infinite. They’re based on Power Purchase Agreements (PPAs), which are commonly 20 year+ contracts that have a fixed payment stream on a per MWh basis. The contract gets renewed upon maturity. Combine limitless generation capabilities with what can be assumed to be perpetual cash flows, and you get the safest, most stable fixed income stream you can expect to find. It is our optimal deflation hedge, and its continuing popularity seems assured. 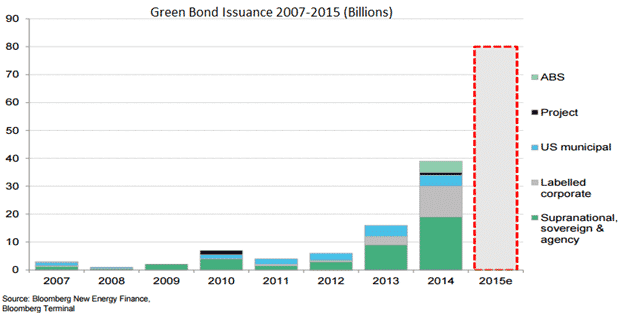 Here you can see the dramatic bump in issuances over the 2014 year as funds became hungry for this type of debt. Institutions are willing to lend out these funds at interest rates as low as 4.5% due to their ability to generate long term cash flow.

Given the current predictions outlined above, we can expect to see an ongoing exponential increase in project debt for renewables. And, accordingly, we will see a similar rise in private equity and sovereign wealth fund appetite for the debt associated with these green power producers. The emerging renewables market is set to explode, with nearly 3.4GW installed in Asia-Pacific to every 1GW installed in the Americas over the coming two and a half decades. Clearly signifying the expansion of renewables into the developing world was the IPO of the second Terraform YieldCo. It’s solely dedicated to the emerging markets.

The future of energy generation lies with our ability to produce clean power both domestically and abroad. The everyday investor can capitalize on these opportunities just like the PE and wealth funds, and in my mind even more so than with green bonds. I have analyzed the renewable power players from every possible angle and have identified Alterra Power (AXY.T) as the most undervalued company within the industry. With a breakup equity value nearly double its current share price, the upside is truly significant. For my complete analysis of Alterra, including NAV and cash flow calculations as well as how Alterra stacks up against the competition.

The renewable power generation market is not a bubble and has not hit the mainstream yet. Being ahead of the curve on this investment strategy promises to be life changing for every investor.