“Gold is a relic of barbarism and should be discarded by all civilized nations as a medium of exchange.”
-John T. Goss, addressing the U.S. Senate in 1894

By the early summer of 1940, Belgium and the Netherlands were defeated.

France was on the brink of surrender. The Nazi war machine took control of the French Channel coast…

…a mere twenty one miles from England’s doorstep.

In a desperate move to protect the nation’s wealth and ensure the purchase of weaponry from America, newly appointed Prime Minister Winston Churchill and the Bank of England began transferring gold bullion to the Bank of Canada in Ottawa.

They called this Operation Fish.

The move would allow the war effort to continue if London were to fall. Churchill would then run the Commonwealth from Montreal, Canada.

England couldn’t spare the aircraft needed for the transatlantic transfer of gold. The move would have to be by boat.

Transferring the Empire’s gold by boat across the Atlantic Ocean at the peak of Nazi naval dominance was not an easy decision to make.

England had tried doing the same thing, during World War 1. But one cargo ship, the SS Laurentic, carrying nearly 1.4 million ounces of gold (USD$1.8 billion in today’s prices), was sunk by mines laid from a U-boat.

And German U-boat technology had improved greatly between the First and Second World Wars.

Right from the onset of the war, in the first month of September 1939, German U-boats sank 50 ships. Operation Fish’s first run, escorted by the ancient WWI battleships HMS Revenge and HMS Resolution, left Plymouth on October 7, 1939.

What began as a small secret operation to ensure weapons purchases from America quickly turned into the largest transfer of wealth from country to country in history.

Over the course of the war, over 25% of total Allied shipping capacity had been sunk in the Atlantic. And yet, not a single shipment of Operation Fish had been lost.

That’s a lot of effort for a “barbarous relic.” Or at least the Central Bank of England certainly believed so at the time.

Maybe that time has come again?

Since 2010, central banks around the world have added 152 million ounces to their reserves.

In 2018, Russia was the biggest buyer of gold. The Russians funded their gold purchases by selling U.S. Treasuries, a process known as “de-dollarizing”. It makes all the sense in the world that the Russians want more gold and less U.S. dollars.

Turkey, Kazakhstan, Hungary, India and Poland rounded out the top six. Below is a chart which shows central bank buying by major gold hoarding nations. 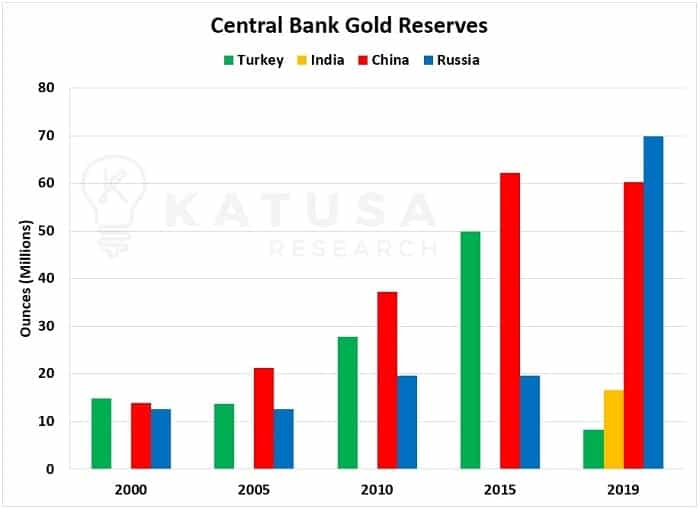 According to the World Gold Council, an additional 23 million ounces are expected to be acquired in 2019. With this, central banks will hold nearly 1.3 billion ounces, controlling over 10% of the global gold market.

This is a drastic change from just over a decade ago when central banks were a net exporter of gold. According to the World Gold Council central banks dumped over 155 million ounces into the market between 2000 and 2009.

Below is a chart which shows central bank activity in the gold market since 1990. You’ll see that from 1990 to 2009 central banks were net sellers of bullion and since 2010, they have been net buyers. 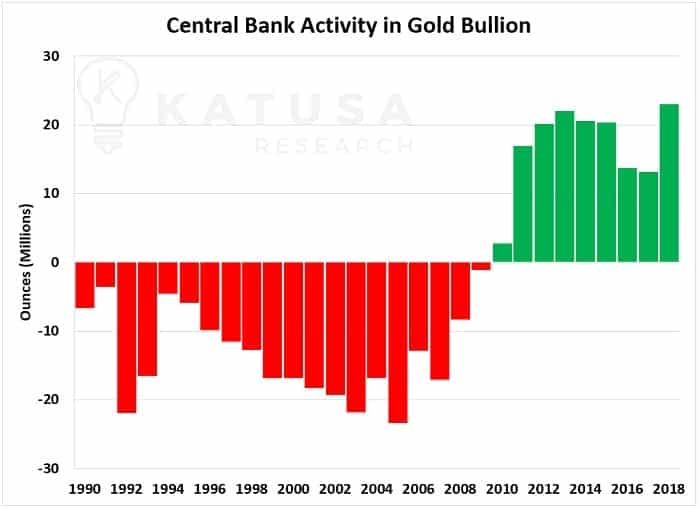 Regardless of the reasons behind it, the question remains:

If central banks are going to continue acquiring record amounts of this “barbarous relic,” where are they going to get it?

New Gold Discoveries Have Fallen Over the Last Ten Years

In the chart below you’ll see how many new ounces of gold have been discovered in the past two decades. You can clearly see the downtrend since 2006. 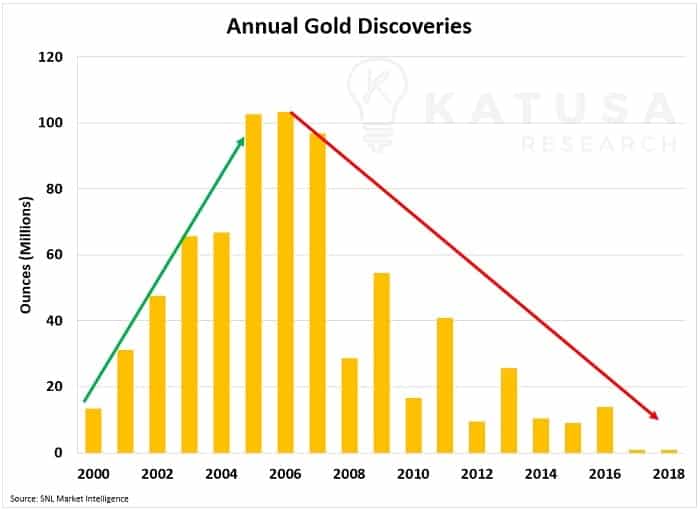 If you look at the major gold producers, both gold reserves and grades have fallen dramatically. 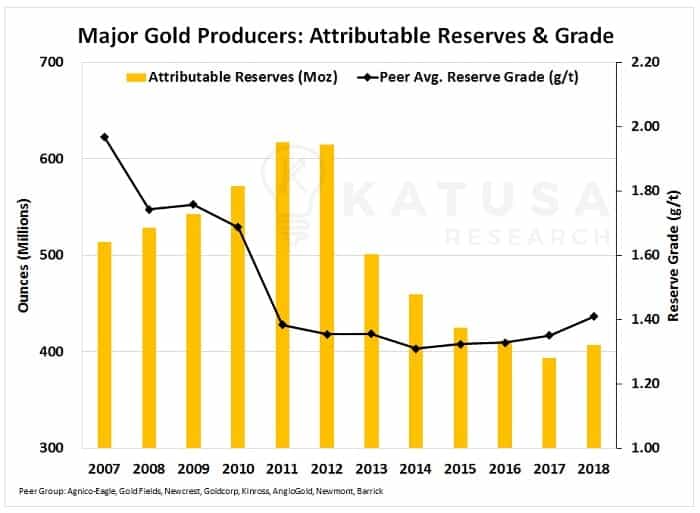 The big drop is not solely due to reserve depletion from production. It is also due to asset sales. It’s no secret that many of the major gold producers overspent in the last cycle and they have been forced to unload assets now to pay off their debt.

I’ve published important gold charts to watch in the past. It’s how you make money in today’s stage of the commodity cycle.

I have a saying you need to know – Grade is King, but Metallurgy is Queen. So let’s first explore the Grade conundrum, then explore the metallurgical issues the sector is facing.

In the chart below, you’ll see cumulative gold resources along with the average grade. While the majors have added over 100 million additional ounces since 2007, the average grade has fallen by 50%. 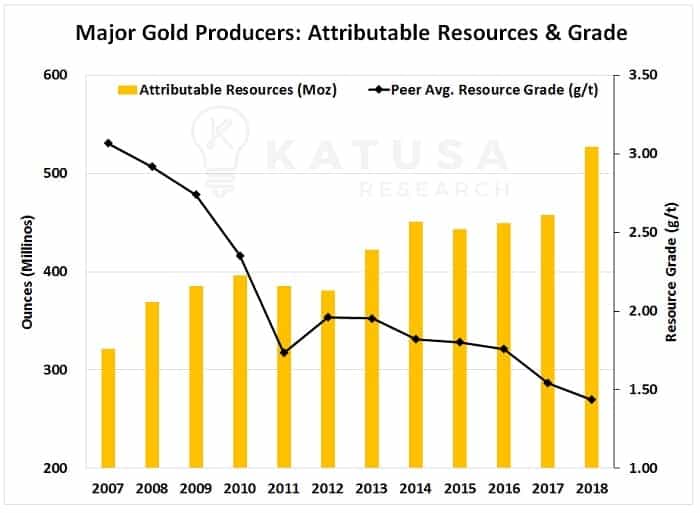 Declining reserve and resource grades are a bad sign. It means that for every tonne of rock mined, the producer is going to extract less gold.

In order to keep production levels stable, producers must increase manhours and expand milling capacity. Both of which are costly and negatively impact cash flow and profits to shareholders.

It’s not just you and I that know the quality of gold reserves and resources are declining. The majors know it too. It’s a key reason why we are seeing consolidation within the gold sector.

Even most within the mining sector give me a puzzled look on their face when I state that Gold Metallurgy is Queen. The fact is, the metallurgy of extracting the gold from the rock is getting more complex.

The trend is your friend, and the deeper we go, the more complex the metallurgy of “fresh rock” (sulphides) gets.

This is the “dirty” little secret of the gold industry.

An interesting study I have completed is this. Many of the gold discoveries that make up the higher-grade gold ounces discovered are in fact refractory.

Refractory gold can still be produced. However, it means higher costs to extract the gold from the physical encapsulation of the disseminated gold particles. Roasters aren’t cheap.

Clean, easy to leach oxides are becoming more and more rare. This is why there’s a premium value for oxide projects. Grade will always be King. But without a strong Queen (good oxide projects or clean met from sulphide projects), you will never have an enduring regime.

My last three weeks have been spent on the road. They were filled with meetings with the largest and most innovative gold producers on the planet. And the most high-profile gold developers. The industry is in full transition as most recently seen by the Joint Venture between Barrick and Newmont’s Nevada operations.

I detailed all my thoughts and ideas generated from these meetings to my subscribers this last week. You’ll find all 26 pages in the March edition of Katusa’s Resource Opportunities.

My team and I put every asset from every gold major through the ringer. We laid out all the reserves and production post mergers including all the headline dominators: Newmont, Barrick, Goldcorp, Rangold.

We also speculated further on the Master’s Chessboard. If you’re a gold investor, you need to prepare for the next moves.

Will Kirkland Lake Gold buy out Pretium Resources? If so, at what price?

The coming Commonwealth takeover of the Australian producers of their Canadian counterparts is in full swing as recently seen by this week’s Newcrest purchase of 70% of Red Chris mine in B.C.

Anywhere between $2.5-5.5 billion in gold assets (operating and development) will hit the market this year from divestures from the majors.

This has massive implications. Make sure you’re paying attention.

And don’t forget, Grade is King, Metallurgy is Queen.