Editor’s Note: Earlier this week one of the junior gold stocks in the KRO Portfolio announced major news, sending share prices soaring over 300% since our buy price was met. If you’re a subscriber, please log in to the Member’s Area to see the latest alert with a special interview with the CEO.

This past week, every economist and analyst was blown away.

The United States defied all odds as the unemployment rate declined to 13.3% instead of soaring towards 20%.

Instead of millions more being unemployed, 2.5 million Americans went back to work. Like I said in last week’s missive, America is at its best when its back is against the wall.

Below is a chart which shows historical U.S. unemployment, and highlighted in red are U.S. recessions. Even at 13.3%, it’s already higher than any peak unemployment rate during any previous economic downturn.

This lag is caused when citizens try to rejoin the workforce, but not enough jobs have been created yet. So, the unemployment rate actually goes up briefly following the end of a recession, before decreasing.

The Longest Economic Expansion is Over

Whether it’s 13.3% or 20% unemployment, the result is still the same. The longest economic expansion in U.S. history came to an end in March.

All told, the expansion lasted 128 months.

The coronavirus has left no stone unturned. And every economy in the world has felt the virus’ impact.

GDP contractions were felt around the world in the first quarter.

The second quarter will be even worse for countries like the United States, Canada, and the Euro Zone. Major economies have essentially ground to a halt for the better part of 3 months.

Yet, most major indices are within shouting distance of previous all-time highs.

Next, you’ll see the Dow Jones Industrial Average, with the U.S. unemployment rate below it. And highlighted in red are U.S. recessions. 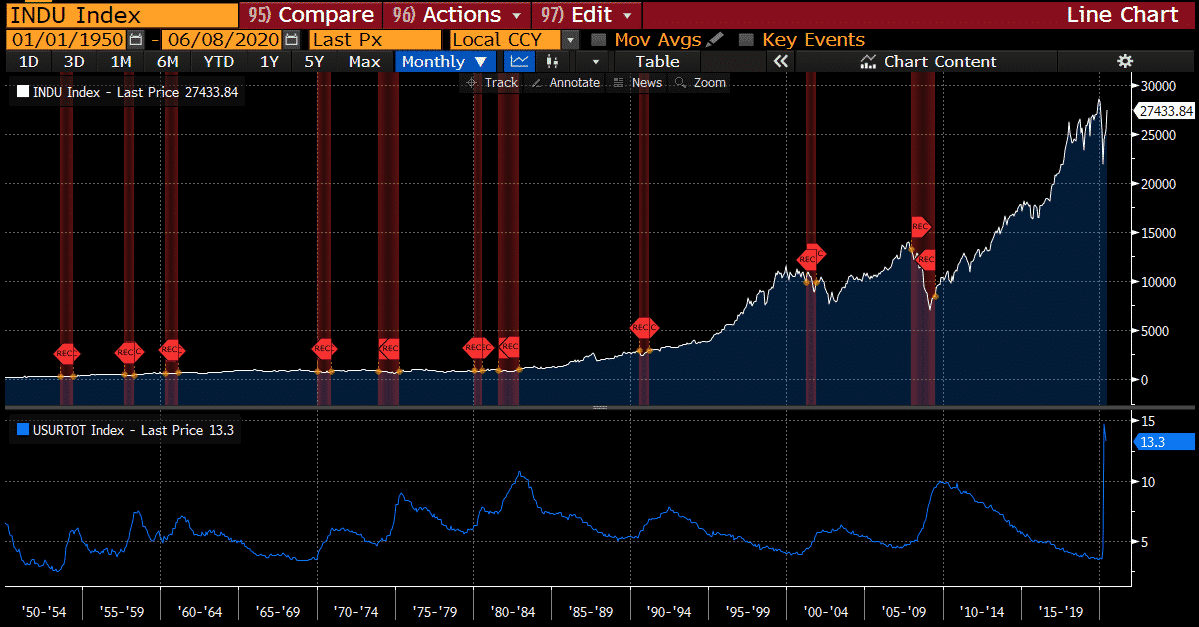 But remember, the stock market is forward looking. Investing by looking in the rear-view mirror is a recipe for disaster.

So, this begs the question:

Will This Be the Fastest Recession on Record?

In March, we saw the steepest fall in the markets. In 27 days, the Dow Jones Industrial Average fell 37%.

It was total carnage and according to all the talking heads, the world was ending.

Then, in the 50 days following, we’ve had the strongest recovery ever. The Dow is up 47%.

And those same talking heads are now beating their chests.

Below is a chart which shows the decline and rebound in the Dow Jones Industrial Average compared to previous major corrections.

This past weekend, legendary investor and previous portfolio manager for George Soros, Stanley Druckenmiller, stated he totally underestimated the rebound and was underinvested.

Even the great Warren Buffet misread the situation when he sold off his airline positions at the bottom.

The biggest, smartest, most consistently profitable investors from over the last 40 years are being shown scratching their heads by the media.

But they’re rich for a reason.

They DO NOT CHASE stocks.

In the past few months, a record number of retail trading accounts were opened on the Robinhood trade platform. Over 3 million new traders have taken to the markets since March.

In fact, of households making between $35-75,000 a year who received stimulus checks, spending on securities trades increased by over 90%. This was the third largest increase in any spending category, behind only savings and cash withdrawals.

The demographics of Robinhood traders are similar to those of sports bettors – ages 25 to 34.

Which is why you see the media running stories like “One Chicago-resident flipped his sister’s stimulus check into nearly $10,000.”

Does this sound normal to you?

This is a company that has over $18 billion in debt, trading at 5 cents on the dollar.

It’s absolutely critical that you do extensive research on a company, and not just watch the ticker. Or else you’ll be left holding the bag.

Meanwhile, at Katusa Research, subscribers and I built 2 new positions in top tier companies during the crash and are up big.

We did miss my target on two other great gold companies by pennies. But we’ve just scored another +211% profit on a junior nonproducing gold stock.

I have another incredible Private Placement opportunity up my sleeve that I believe has the potential to turn into another multi-bagger.

I give us an A- for our performance. Like my dad said to me growing up, regardless of how well I did, “you could always do a little bit better.”

When our monitors and systems start alerting our team that retail traders are going nuts on precious metals stocks, that will be our cue that the top is near.

But for now, the best days in commodities are coming.

Of course, the “reasons” I am referring to is the cumulative amount invested by central banks and governments to keep the economies from total collapse.

The $9 trillion question is, does this U.S. unemployment data point represent an inflection point for the economy, or is it a one-off blip on the screen?

It’s important to consider that this is a single datapoint.

I believe we need several more data points before we can truly connect the dots and project the type of recovery we’ll be seeing. Two important factors I’m looking at are the labour market conditions and consumer spending habits.

Knowing the types of businesses that are doing the hiring is very important to understanding the real strength of the economy.

How much value is being created through this rehiring process? I think we could see a quick restart of initial hiring by businesses who are cashed up and ready to go back. It’ll be a long, difficult road for those businesses less fortunate.

I am hesitant to believe that discretionary spending habits will immediately go back to where they were four to six months ago.

The laid off or recently rehired citizen isn’t going to go out and buy a brand new flatscreen TV, a fancy car or go on vacation to Las Vegas.

This could very well be the summer of “staycations”.

That’s why I believe a “swoosh” style recovery is a possible option. An economic recovery that starts quickly and then slows down, before grinding higher over time.

How Do You Invest at This Point in the Recovery?

On top of that, as I wrote last week, Yield Curve Control (YCC) is likely to become a tool in the Fed’s toolbox, as the Fed tries to wrangle a hold on interest rates.

This bodes very well for commodities.

A tsunami of cash is a tremendous catalyst for stores of value like gold.

At the same time, this cash fuels economic expansion which needs base metals and oil. Not to mention funding the green dream and ESG movements.

It’s worth noting that I think the activity in the U.S. Dollar over the past four months truly demonstrates that the USD will remain the world’s reserve currency.

The demand for dollars was virtually unlimited during the crisis.

You couldn’t say the same thing about the Yen, Euro or the Yuan.

It may come as a surprise to you, but the U.S. Dollar has actually increased its share of global payments. The USD currently makes up over 42% of global payments, up from 40% in 2017 – have a look at the chart below… 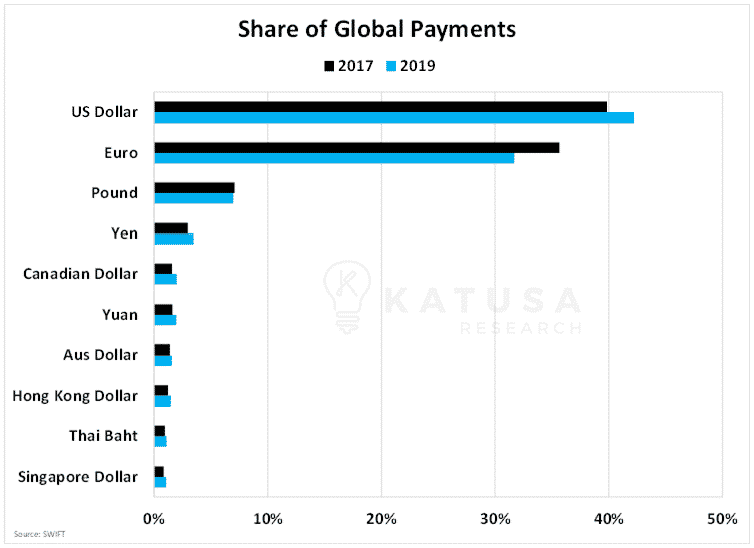 Here at Katusa Research, I’m positioning myself and my subscribers into unique opportunities that I believe have substantial upside.

One of my latest gold stock recommendations just made a massive deal to acquire an incredible asset earlier this week.

Take a look for yourself and see how the Katusa gold portfolio has held up versus its peers since the start of the year:

Or if you’re finding that you’re not getting the best information on commodity market action every month, consider learning more about my premium newsletter – Katusa’s Resource Opportunities.

A secret I’ll share with you is that it really comes down to backing the best people.

I’ve spent 2 decades as a professional investor and fund manager. I’ve built relationships with the who’s who of the industry. I’ve flown over a million air miles and visited over 100 countries. You can’t replicate that type of experience.

I’m truly excited for the next chapter of this market. We’ve had a great start to the year, and I think the second half could be even better.

To see where I’m putting millions of dollars of my own money to work in the gold and resource sectors, click here to learn more about becoming a member to Katusa’s Resource Opportunities.